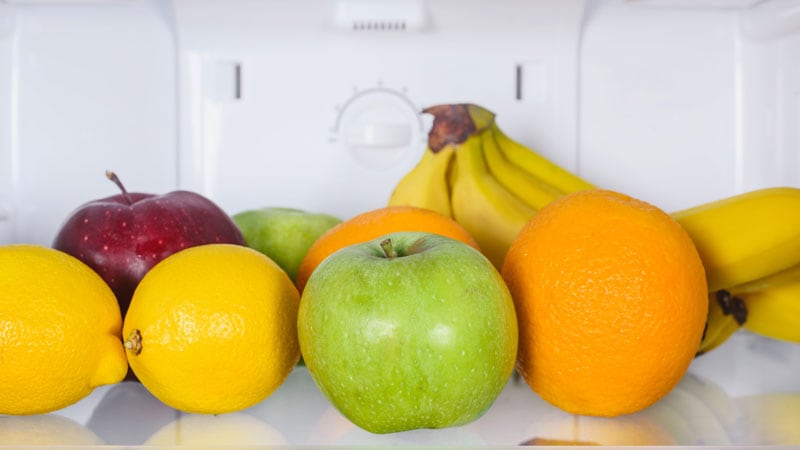 A new study supports the recommendation of eating two servings of fruit a day for health benefits — in this case a lower risk of diabetes.

Adults who ate two servings of fruit a day had a 36% lower odds of developing diabetes within 5 years compared to those who ate less than a half serving of fruit a day, after adjusting for confounders, in a population-based Australian study.

The findings by Nicola P. Bondonno, PhD, and colleagues, based on data from the Australian Diabetes, Obesity, and Lifestyle Study (AusDiab), were published online June 2 in the Journal of Clinical Endocrinology & Metabolism.

The study also showed that a higher fruit intake was associated with higher insulin sensitivity and lower pancreatic beta-cell function in a dose-response manner.

And a higher intake of apples — but not citrus fruit or bananas, the two other fruits studied — was associated with lower post-load serum insulin levels.

“This indicates that people who consumed more fruit [especially apples] had to produce less insulin to lower their blood glucose levels,” Bondonno, from the Institute for Nutrition Research, Edith Cowan University, Perth, Australia, explained in a statement from the Endocrine Society.

“This is important since high levels of circulating insulin (hyperinsulinemia) can damage blood vessels” and this is “related not only to diabetes, but also to high blood pressure, obesity, and heart disease,” she observed.

The study supports the recommendation of the Australian Dietary Guidelines — 2 servings of fruit a day, where one serving is 150 grams, which corresponds to a medium-sized apple, orange, or banana — Bondonno clarified in an email to Medscape Medical News.

However, fruit juice was not associated with better glucose or insulin levels, or lower risk of diabetes, possibly because of its relatively high glycemic load and fewer beneficial fibers, the researchers speculate, adding data suggest that even juice with added fiber does not trigger satiety.

The study findings “support encouragement of the consumption of whole fruits, but not fruit juice, to preserve insulin sensitivity and mitigate [type 2 diabetes] risk,” Bondonno and colleagues summarize.

“Promoting a healthy diet and lifestyle which includes the consumption of popular fruits such as apples, bananas, and oranges, with widespread geographical availability, may lower [type 2 diabetes] incidence,” they conclude.

It is not clear how eating fruit may confer protection against developing diabetes, the researchers write.

They aimed to examine how consumption of total fruit, individual fruit, and fruit juice is related to glucose tolerance, insulin sensitivity, and incident diabetes at 5 years and 12 years in participants in the nationally representative AusDiab study.

They identified 7675 adults aged 25 and older without diabetes who had undergone blood tests and completed a food frequency questionnaire in 1999-2000.

Participants had indicated how often they ate 10 different types of fruit, any type of fruit juice, and other foods on a scale of 0 (never) to 10 (three or more times/day).

Participants in each quartile had a similar mean age (54 years) and body mass index (27 kg/m2).

However, compared with participants in quartile 1 (low fruit intake), those in quartiles 3 and 4 (moderate and high fruit intakes, respectively) were more likely to be female and do at least 150 minutes of physical activity a week, and less likely to smoke. They also ate more vegetables and less red meat and processed meat, but they consumed more sugar.

Of the 3518 participants with 12-year follow-up, 247 participants had diabetes, but there were no significant associations between fruit consumption and this longer-term risk of diabetes, possibly due to the small number of participants and events.