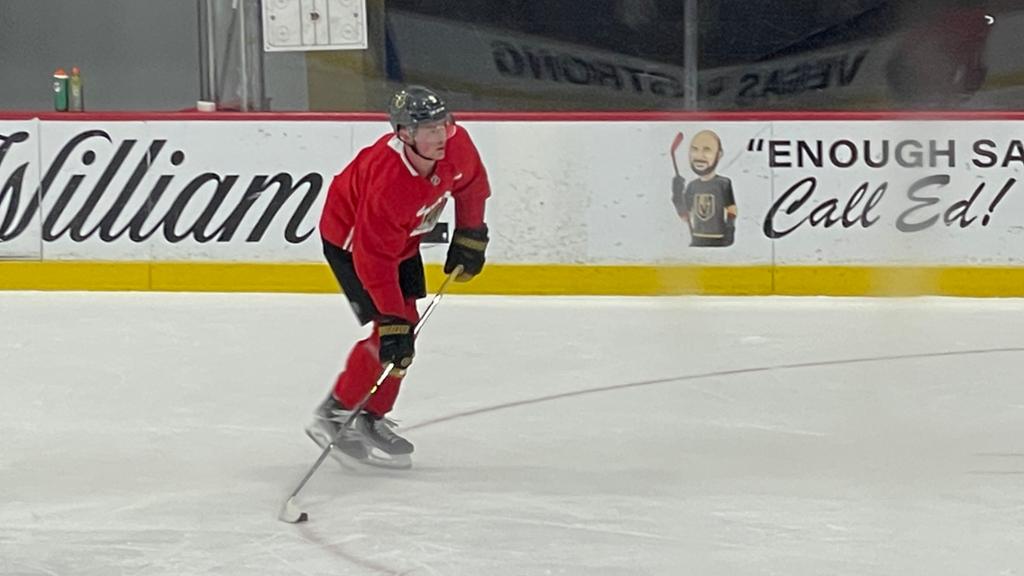 Jack Eichel skated with the Vegas Golden Knights on Tuesday for the first time since having artificial disk replacement surgery Nov. 12, eight days after Vegas acquired him in a trade with the Buffalo Sabres.

“Bit of an emotional moment for me,” Eichel said. “Just another step in the process. This was like a kid on Christmas waking up in the morning, getting the opportunity to get back on the ice with the guys. … just with everything that I’ve been through, it seems like things are getting back to normal for me, so that’s what I wanted all along. It felt really good to be here and really feel like you’re, I guess, part of the group.”

Eichel told NHL Network on Nov. 5 he thought he’d be able to return to play three months after surgery, which would be the second week of February. Neither he nor Vegas stated a timeline for his return Tuesday.

“I wouldn’t say there’s really a target date at this point,” Eichel said. “I think it’s a, see how you feel and see how you progress and how confident and comfortable you are. I think at that point, you’ll know … I feel like I’ll know mentally and physically and emotionally when I’m ready to go. The team and the organization has been so supportive not putting a hard date of when I need to be back or when they expect me to be back. Just very low pressure. You have different milestones you want to meet during this process.”

Golden Knights president of hockey operations George McPhee said there is no rush for Eichel to join the lineup.

“The timeline is unknown,” McPhee told Sportsnet 590 in Toronto on Tuesday. “We’re two months today post-surgery, and we know that he’s going to be able to come back between three and five months. I think he feels fantastic. It couldn’t have gone any better than it has so far. But the next part will be probably the hardest in terms of when is he ready for contact and that sort of thing. So we don’t have a specific date in mind, and that’s probably a good thing so as to not put any pressure on him.

“Nice to see him,” Golden Knights coach Peter DeBoer said. “At the same time, you want to temper your enthusiasm, because this is just the first step.”

Eichel was on the ice on his own Dec. 2, according to an Instagram post by Brandon Wong Hockey, three weeks after having a procedure that had never been done on an NHL player. The Golden Knights said that day that Eichel’s surgery was successful with no complications and he was expected to make a full recovery.

“The recovery was actually pretty smooth,” Eichel said Tuesday. “I was fortunate to be in the hands of Dr. Mark Lindsay, kind of just let him do what he does best. We had a good plan all along. Knock on wood, there wasn’t any setbacks. We did some meticulous work. It felt like maybe the first few weeks I was getting used to how I felt. The next few weeks it was sort of, ‘OK, I’m starting to feel better.’ And then the next few weeks it’s like, ‘Wow, I feel really good right now. I almost feel back to normal.'”

“Joining a new team, that’s a bit of an adjustment,” Eichel said. “I want to make sure when I feel physically as confident I can be that I can play my game. That just comes with practice time and reps. I’m not in a rush right now to get anywhere. At this point, it’s sort of a feel thing and just continue to build confidence with the way I feel, my conditioning level, my timing. I think as you start to pile days up, you start to feel better and start to feel more confident, and that’s when I think you get closer to feeling like yourself.”

The Golden Knights (23-14-1) are first in the Pacific Division, two points ahead of the second-place Anaheim Ducks. They are averaging 3.47 goals per game, fifth in the NHL, with a lineup that includes forwards Mark Stone (24 points, seven goals, 17 assists in 21 games), Max Pacioretty (21 points; 12 goals, nine assists in 16 games) and Jonathan Marchessault (18 goals in 33 games), and defensemen Shea Theodore (25 points; seven goals, 18 assists in 35 games) and Alex Pietrangelo (23 points; five goals, 18 assists in 36 games).

After the trade, Eichel was projected to be the center on a line with Pacioretty and Stone. Pacioretty is out indefinitely after having wrist surgery Dec. 30.

“I’ve obviously been watching the games the past few months,” Eichel said. “It’s been really exciting to watch the team. There’s so many great players in that locker room and so many great guys I think I can mesh with and play with. That’s not really up to me. At this moment, it’s important for me to put myself in the position to be back at 100 percent and help this team win hockey games.”

“We’re excited. You’re adding a top 10 player in the league into our lineup at some point,” Stone said. “Obviously we’re not sure when that’s going to be. … We’re excited to have him just around the team. It’ll be exciting to see his skill set for the next little bit of practice here and building up to his first game.”

NHL On Tap: Maple Leafs, Golden Knights look to get back on track
Bruins Sign Tuukka Rask To One-Year Contract