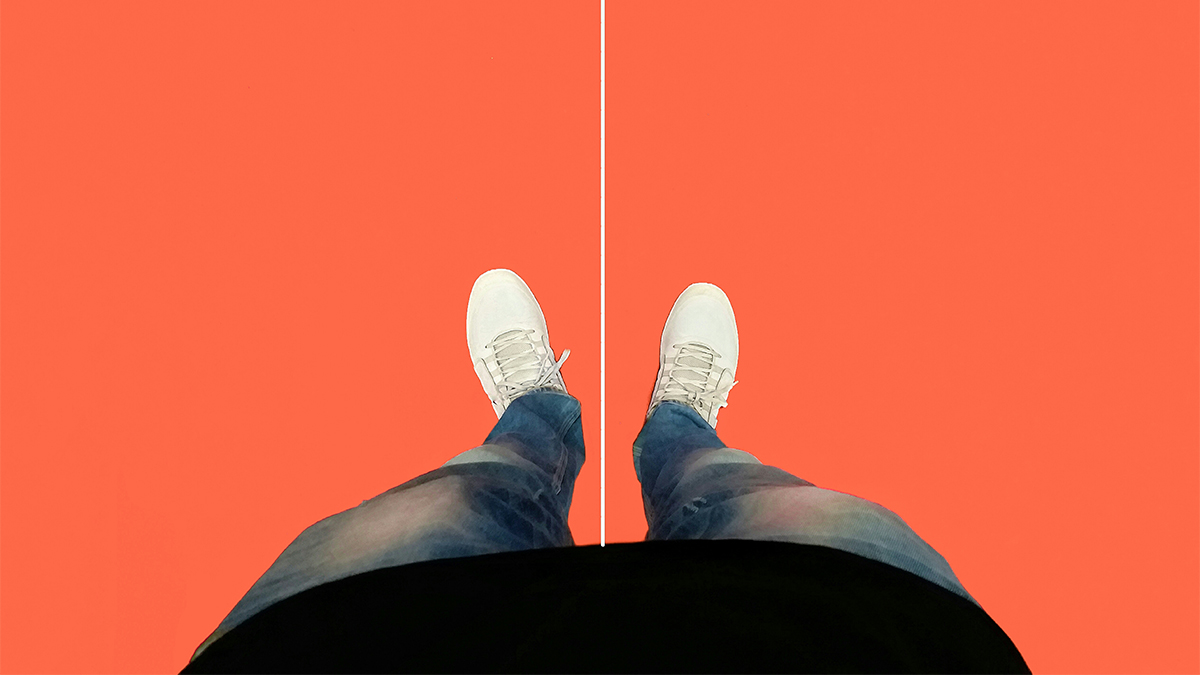 Career inflection points are moments of potential change and transition that often evoke feelings of ambivalence: the simultaneous experience of positive and negative emotions about something. Whether prompted by sudden, external triggers (e.g., promotion opportunity or job loss) or creeping stressors that reach a tipping point, career inflection points are opportunities to reevaluate not only career decisions, but also ourselves. The studies the authors have conducted on careers, identity, and ambivalence, along with the work of other scholars, have led them to conclude that you can harness ambivalence at career inflection points to craft a more authentic and fulfilling career. Here, they discuss the effects of ambivalence — and how to use yours to your advantage.

The pandemic, economic uncertainty, and recent layoffs have brought many people to career — and thus, identity — inflection points: life’s “what now?” or “fork-in-the-road” moments when people must decide where to go, what to do next, and who to become.

Career inflection points are moments of potential change and transition that often evoke feelings of ambivalence: the simultaneous experience of positive and negative emotions about something. Inflection points bring personal and professional “selves” to the fore, surfacing tensions between these selves and conflicting goals, which growing scholarship shows increase our ambivalence.

Although ambivalence may be somewhat uncomfortable, often provoking feelings of being torn, conflicted, and mixed, it can actually be good for decision making, particularly when problems are complex. Studies have shown that ambivalence can increase creativity, advice seeking, and job search activities, and may even reduce commitment toward failed courses of action.

The studies we’ve conducted on careers, identity, and ambivalence, along with the work of other scholars, have led us to conclude that you can harness ambivalence at career inflection points to craft a more authentic and fulfilling career. Here, we’ll discuss the effects of ambivalence — and how to use yours to your advantage.

Why You Feel Torn

Career inflection points, whether prompted by sudden, external triggers (e.g., promotion opportunity or job loss) or creeping stressors that reach a tipping point are opportunities to reevaluate career decisions. But more than that, they’re opportunities to reevaluate ourselves. We get to ask questions like: What do I value, and what do I prioritize? Who am I now, and who do I want to be?

The process of answering these questions forces people to grapple with their own “identity complexity,” or the multiple, valued self-definitions or identities that stem from holding multiple social and work roles, belonging to various social groups, and having more than a few distinctive personal attributes and interests. Although research on identity complexity and ambivalence is only recently emerging, this evidence suggests that identity complexity can cultivate ambivalence because each “version of ourselves” may carry unique goals that conflict with one another — thus eliciting ambivalent feelings. The process of exploring our complex identities can be exciting, but the conflicting feelings it yields can also cause anxiety.

Managing the Discomfort of Ambivalence

For many, ambivalence is uncomfortable because it violates our need for consistency. People sometimes react to this uneasiness in suboptimal ways. To avoid or minimize the discomfort as quickly as possible, they might make an impulsive decision based on incomplete or oversimplified information, or they might avoid making a decision altogether for as long as they can.

Consider Rachel, who landed a coveted job at an elite consulting firm but found herself increasingly unhappy traveling week after week. Eventually, she started to ask herself: Do I want to keep going like this? She considered what she loved about her job: her intelligent and generous colleagues, opportunities for intellectual development, and respect from others in the profession — all benefits that sustained her work self and helped her achieve her professional goals. Then she considered what she disliked about her current situation: the feelings of loneliness and transience that came from traveling so often, having her schedule determined by airports and weather, being physically distant from her dog, and always eating out — all costs that drained her non-work self and detracted from her personal goals.

When this tension came to a head — often in the moments she spent delayed on the runway —she felt overwhelmed and unsure, so she tried her best to ignore the latent conflict and just forget about it. However, when her boss eventually asked her to apply for a promotion, she found herself asking for “just a bit more time to think about it” week after week. After months of procrastination, she ended up leaving the firm.

The danger of this approach to managing ambivalence is that decision delays can drag on for what can seem like (or actually be) months, robbing us of a sense of engagement in the present moment and even satisfaction with life. These ambivalence-avoidant actions can also lead people to minimize and sacrifice important facets of their identity.

Working With Instead of Against Your Ambivalence

But the ambivalence that comes to a head in inflection points isn’t necessarily dysfunctional.

Research from one of us (Brianna) has tracked the positive, long-term consequences of embracing one’s complexity to enact authentic, nontraditional career paths. And research from another one of us (Naomi) helps us understand the reasons why leaning into ambivalence may lead to self-insight and authenticity. In one study, she found that those who frequently experience mixed emotions and conflicting thoughts report having a reduced sense of perceived control in life, but they also report higher levels of open mindedness, curiosity, and perspective taking. Her research also shows that ambivalence is associated with greater seeking of and receptivity to alternative perspectives and reduced defensiveness to feedback from others, which leads to increased judgment accuracy. Other scholars have also shown that mixed emotions are related to heightened creativity because they alert people to the complexities of their situations.

Learning to embrace ambivalence may open your mind about different career options, and over time, you might even be able to see this uneasiness as a marker of growth toward a more authentic way of living and working.

How to Use Ambivalence to Navigate Career Inflection Points

So, what’s the “trick?” How do you take advantage of the benefits of ambivalence rather than letting it lead you astray? The steps below can help you harness ambivalence as a tool to build self-insight and recognize your inherent multifaceted nature, which can then fuel creative problem solving and steer you away from black-and-white thinking. They can help you integrate seemingly incompatible or competing identities and goals so you can successfully enact your true — and whole — self over time.

Approach ambivalence with curiosity and pause to identify what you’re feeling. Because ambivalence can feel unpleasant, you might generalize this discomfort to your entire situation, interpreting it as a sign that something has gone wrong or that you’re a poor decision maker. But in reality, it may be a beacon guiding you toward a more optimal future.

Emotions give you information about yourself; feeling multiple emotions at the same time can be a sign that there are multiple identities you value and that there’s a risk that something important to you might be lost. Allow yourself to take advantage of the “pause” ambivalence naturally creates and approach the complex feelings with curiosity — not judgment — to identify what you feel and why.

For example, you might ask yourself a series of questions or jot down some notes. Are you feeling excited about changing roles but anxious about the amount of training required? Are you feeling sad about leaving your current team, but also proud that your hard work has earned you a promotion? Are you embarrassed that your pitch fell flat, but also relieved you don’t have to work with problematic clients? Think of this as building a skill or even learning a new language; research shows that the more you use specific language to describe your feelings (known as “emotional granularity”), the stronger your emotional regulation skills can become. Differentiation provides you with a better understanding of the cause of the emotion and therefore can facilitate contextually sensitive emotional regulation.

Additionally, share your ambivalence with others who are supportive, cooperative, and “on your side,” as doing so helps you come up with even better, more integrative, and innovative solutions to complex problems — together.

Step 2: Give yourself time.

Our recent research has found that the benefits of ambivalence go away when there is pressure (internal or external) to reach a conclusion quickly. If you can, give yourself a deadline that isn’t in the immediate future and allows you to devote time and energy to listening to your emotions and considering your alternatives. We think that doing this helps you harness, rather than suppress, the information you’re gleaning from your ambivalence to make a more informed decision.

A participant in one of our recent studies demonstrated what this looks like in practice. She shared that she was a trained social worker working in the nonprofit field (a professional goal) but was not able to pay off her student debt (a personal goal). She felt like these goals were in conflict and was ambivalent about her situation. She initially felt stuck, unsure of how to resolve this tension. On her own timeline — before she felt pressure to decide her next steps —  she started doing informational interviews in a variety of different sectors, including in corporate settings. The information she gained broadened her mind about the options and avenues available to her, and she realized that she could do her work within a corporate context — and thus also be able to pay off her student debt (an integrative outcome). In other words, by inquiring into the tension she felt and talking to others, she found a way to “do both.”

Step 3: Remind yourself that nothing is forever.

It’s important to remember that a single career decision doesn’t have to be permanent; instead, think about this as a decision “for now.” The beauty of most career decisions is that they’re often reversible, or at least recoverable, and there will always be another decision to be made down the line.

One practical way to get into this frame of mind is by connecting with people who are more advanced in their careers or even retired. They have the wisdom of hindsight and can help you approach your career with more flexibility, with the understanding that one decision won’t define you forever. In fact, emerging research on generational differences in the workforce suggests that age diversity improves decision making on teams.

Career inflection points are markers of our complexity, yet the world has largely conditioned us to think of complexity — both in terms of identity and our emotions — in a negative light. We think it means we’re fragmented, don’t have our priorities straight, and can’t make up our minds. This can lead some of us to make career decisions that minimize or avoid the feeling of ambivalence. Yet research suggests that ambivalence can actually be quite functional, especially if we take a longer-range perspective on it. Making decisions that are informed by our mixed emotions can help us create more satisfying, authentic careers; it allows us to make decisions that integrate our many (sometimes seemingly competing) goals and identities rather than forcing us to decide between them. Simply put, when people accept that career ambivalence is a fact of life, they can start to view, and use, their mixed emotions as opportunities to flourish rather than flounder.

Does Influencer Marketing Really Pay Off?
EUR/USD: December is Euro’s best month by some distance – SocGen