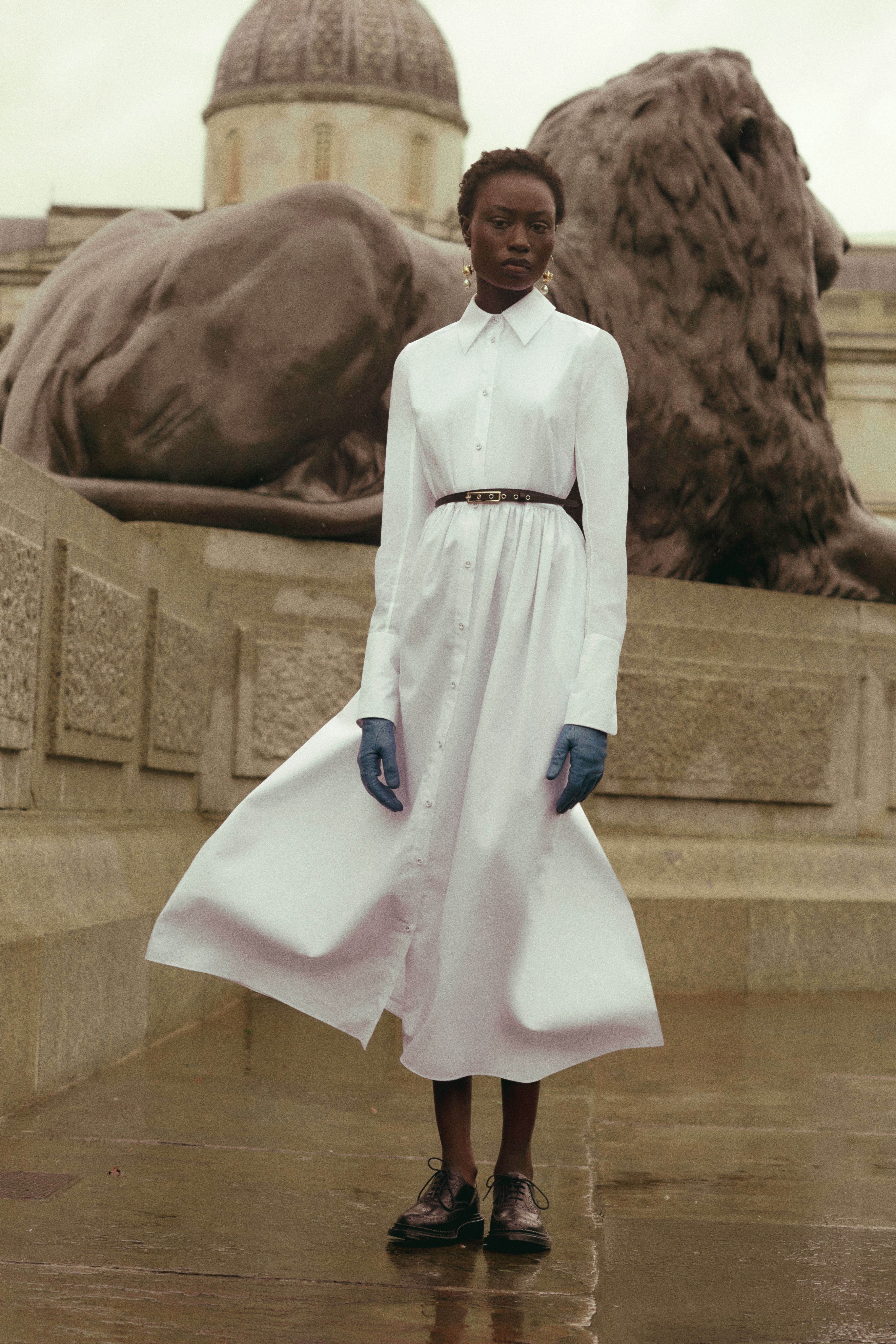 “Rational, I think, is the right word,” Erdem Moralioglu said during an appointment in his Mayfair store, holding up a dress from his resort collection. “A rational approach to a hand-embroidered red organza broderie anglaise gown with 3D flowers on it, punctuated by a black grosgrain belt,” he quipped. In recent seasons, the designer has been tempering his delicate, beflowered lines with a certain purity. If it’s rationalism over fantasy, the irony isn’t lost on him. At its heart, his brand—which celebrates its 15th anniversary this year—is rooted in romanticism: wistful narratives about the heroines of history, stately home grandeur, and Edwardian afternoons in the greenhouse. So, when Moralioglu strips down, his crinoline stays on.

His resort proposal was an uncharacteristically narrative-free exercise for the storyteller. He devoted it to 15 years of collections, picking out some of the pieces “that still speak to me” and running them through his new purifying filter. Captured around London, it was an ode to the significant places where Moralioglu has shown and shot his collections, from Bedford Square and Manchester Square to the National Portrait Gallery and the Royal Academy of Arts. “It felt like a love letter to the archetypes of Englishness,” he said, musing about Anglo tropes like the perfect trench coat, a particular nipped-in waist, dresses that look like your grandmother’s curtains, and Nancy Mitford casually throwing on a cardigan over a ballgown.

Styled with no makeup and with flat brogues, his garments had a purpose to their step that you might associate with a decidedly English femininity. Within the whimsical territory Erdem occupies, they exuded a no-fuss attitude that could even pass for pragmatic—a word the designer welcomes more than a decade into his career, but would probably have scoffed at in his primmer, more proper beginnings. It’s what Moralioglu believes is called for in a post-pandemic fashion climate where preciousness and permanence go hand in hand. Now, he is captivated by wardrobe staples: garments that will stay in a woman’s wardrobe forever, like the shirting line he debuted last season and evolved into a line of shirt dresses for this collection, studied and refined with timeless precision.

They were layered with tailoring spun from the same philosophy but imbued with a little more character, such as a 1940s-cut cashmere-blend flannel jacket with lightly padded hips and a determined shoulder, or a sculpted tweed suit inter-knitted with yarns that evoked the dots of pheasant plume. Floral-embroidered denim easily captured the balance between dreamy and rational; as did bejeweled, light georgette day dresses and ones made in washed linen or hammered satin, walking Moralioglu’s new tightrope between the frail and the sturdy. The bustier shape of a rose tulle dress with matching floral appliqué was structured from pin-tucks that resembled boning, illustrating how a no-fuss Erdem approach translates into eveningwear. He said it should be worn with flats.

“I found myself thinking about where we are, where we’re going, and how we’ve created these collections in London,” he reflected, with his store as his backdrop. More than anything, that space serves as a reminder of the head-to-toe brand Moralioglu has built, which now caters to a complete wardrobe for his loyal customer, from day to evening and every dress code in between. “There’s nothing wrong with referencing yourself. It’s a good thing to look at the body of work you’ve created over the last 15 years,” he said, driving home the message of permanence and longevity that underpins the world of Erdem, for realists and dreamers alike.