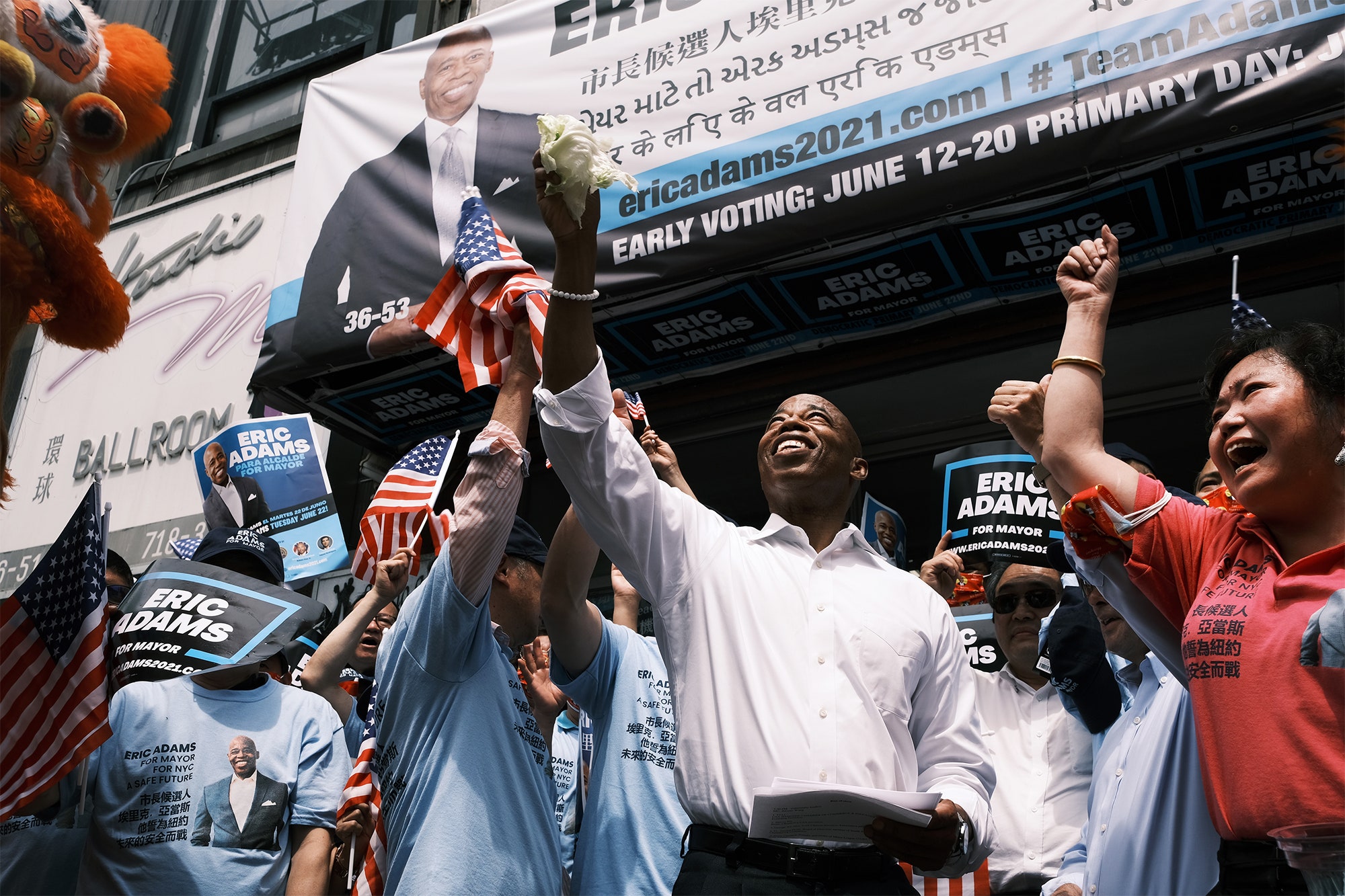 On June 22, 2020, 43 more people died from the pandemic battering New York City. Protesters took to the streets again, NYPD helicopters hovering low overhead, cops in riot gear kettling marchers and smashing their bicycles, continuing the confrontations sparked by the murder of George Floyd one month earlier. The notion that a tough-on-crime former cop would be the leading mayoral candidate a year later seemed far-fetched.

Things have changed. Early voting starts this weekend, culminating on June 22, 2021, primary-election day. Crime, not coronavirus, has become the top priority for a majority of voters, according to a fresh NY1 poll. And Eric Adams, ex-NYPD captain, is the front-runner. What a world.

Timing is always crucial in city elections. David Dinkins won as a racial conciliator in 1989 shortly after Yusuf Hawkins, a Black teenager, was killed by a group of white men in Bensonhurst. Four years later crime was up, and Rudy Giuliani won as a hard-ass ex-prosecutor. Eight years later the World Trade Center was attacked, and the city thought it needed to elect a billionaire businessman, Mike Bloomberg, to recover. Twelve years after that, lefty Bill de Blasio was the supposed antidote to the autocrat.

Now COVID cases are (thankfully) way down; shootings are way up. Adams, a Black former cop, is selling himself as the perfect mix of police reformer and public-safety expert. “Adams is saying, ‘I have the support of Abner Louima. I have the support of Sean Bell’s father. But I also think we need to have a strategy to get guns off the street,’” says Bruce Gyory, a Democratic strategist who is not working with any of the contenders. “There’s a clear majority of New Yorkers who want significant criminal justice reform. But there’s also a clear majority that wants proactive community policing that is not racialized. He’s in the sweet spot of the electorate.”

As campaign messaging, it is indeed working well for Adams. More dubious is whether Adams has the skills and experience to deliver what he’s promising. True, his 22 years in the NYPD could give him a level of credibility with the department that de Blasio has sorely lacked. And Adams has sometimes been prescient in his criticism of the department on racial issues, even while still in uniform. What Adams actually did as a cop, though, is largely a mystery. Politico has filed a Freedom of Information Act request for Adams’s personnel records, but they are still sealed; if there were any internal affairs investigations of Adams, for instance, they are still out of sight. During the campaign, Adams has regularly referenced his years wearing a bulletproof vest. Like most young cops, he apparently spent time on patrol. Yet contemporaries mostly remember him as an unremarkable officer during assignments with Brooklyn and Manhattan precincts. “Eric was well liked, personally, a pretty good boss, and an effective self-promoter, but he was not much of a street cop,” an NYPD insider says. “He was an inside guy. A house mouse.”

Adams’s signature initiative—Operation Take Back Our Community, which has provided teenagers of color with guidance on how to react when stopped by police—was launched in his role as cofounder of 100 Blacks in Law Enforcement Who Care. Adams rose to captain before retiring in 2006 to run, successfully, for a seat in the New York State Senate. “Eric made captain—not inspector,” an NYPD expert says. “Captain is the last civil service rank. You become a captain by taking tests, and you do well on tests by staying inside and studying. You make inspector because people say, ‘That guy knows something about crime.’”

When I asked Adams recently about his plans to make the NYPD both less abusive and more effective, his approach boiled down to hiring the right people to do the right jobs. Hard to argue with that, of course; harder still to execute on a grand scale in a department resistant to change. Ask Adams about police reform, and he doesn’t talk about reducing the NYPD’s budget or its use of force, but about simplifying the job. “We need to redefine the ecosystem of public safety. We call the police for everything. That’s the wrong way to do it,” he says. “We need to redefine it and say, ‘Hey, police. Your role is going after bad guys and dangerous people and creating the omnipresence of safety.’ And then let’s look at the other pieces that must be in place, like those who are dealing with mental health illnesses.” How to stem the flow of guns into the city? Adams wants to spot-check buses coming in from out of state and to restore the NYPD’s anti-crime units, which became notorious after the chokehold death of Eric Garner.