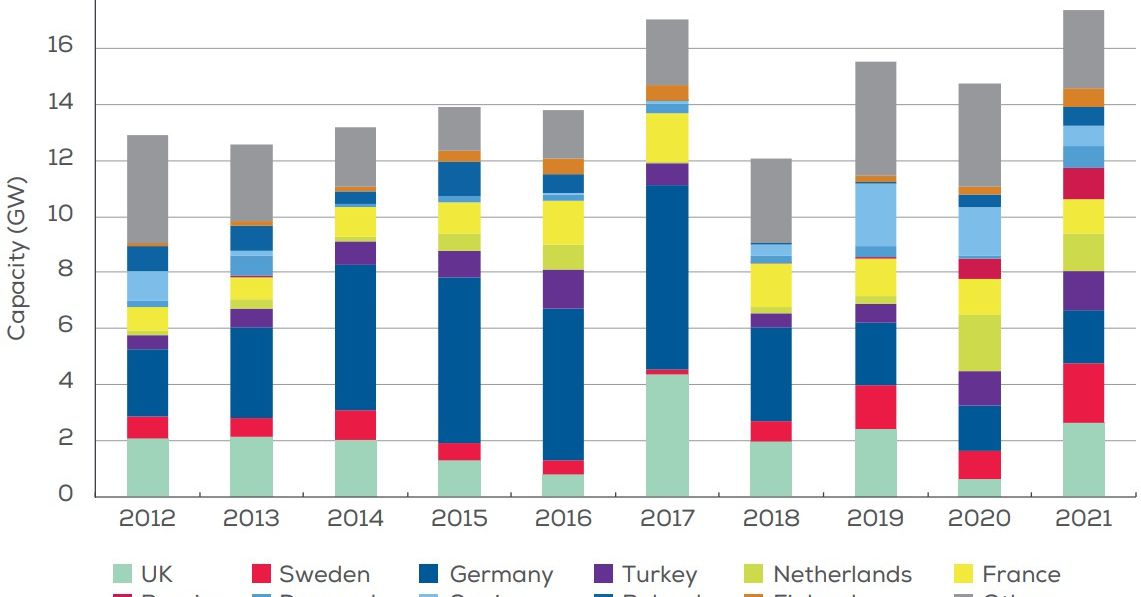 November 23 – Job cuts and slashed profit margins at wind turbine suppliers have highlighted the impact of rampant inflation and logistics issues on the wind industry.

The cost of energy and components in the European Union has soared since Russia invaded Ukraine and economies bounced back from the pandemic. Wind turbine production costs have surged by 40% and much of this has been absorbed by suppliers, according to industry group WindEurope.

“In most cases, contracts were not indexed to factor in these cost increases,” said Christoph Zipf, WindEurope spokesperson.

“This led to the unsustainable situation that all of Europe’s five wind turbine manufacturers were making a minus in the first half of 2022.”

Suppliers have started to raise their prices and this will impact developers’ bidding and construction strategies.

The rise in global commodity prices is slowly reversing, but prices remain volatile and a shifting regulatory landscape for renewable energy is increasing market uncertainty. The European Union is implementing a price cap of 180 euros/MWh for wind and solar revenues and additional national measures are disrupting Europe-wide growth plans.

Without indexation of contracts to rising prices and faster permitting rules, wind growth will be stunted, industry officials warn.

Stable and effective regulation is needed to help the region get back on track, officials said.

Rising prices are endangering Germany’s plan to accelerate onshore wind installations to over 12 GW per year by 2025. Germany also aims to quadruple offshore wind capacity to 30 GW by 2030, rapidly ending its reliance on Russian gas.

Germany has already lifted a two-year deadline on building new wind farms to allow companies to adapt to volatile markets but the past two wind energy auctions have been undersubscribed. Without indexation, this is likely to re-occur in the next auction in December, BWE spokesman Frank Gruneisen said.

“Currently, we see increases of up to 40% or 45% in the German industry price index, which means that in order to be economically viable, the reference value (for wind power) would have to go up by approximately 40 to 45%,” Gruneisen said.

The latest monthly data from the federal statistics office shows Germany’s producer price index in September was 45.8% higher than a year ago, driven in particular by a 132% rise in energy prices.

Wind and solar permitting can take several years due to complex administrative processes and a lack of resources at permitting authorities. The EU has called on member states to accelerate permitting procedures, in some cases to under two years. Several national governments plan to fast track approvals but implementation will be challenging in areas that face opposition.

Developers who were awarded energy contracts in Spanish auctions in 2021 for projects that are set to come online in 2024 are currently suffering the pressures of the recent surge in turbine prices.

“If you already have all the permits, you could have a shorter lead time of one and a half years and two years between the auction and the connection to the grid,” he said.

Developers in Spain unable to renegotiate prices with wind turbine suppliers for projects awarded in auctions may decide to back away from regulated fixed-price contracts and look for more profitable power purchase agreements (PPAs) in the private sector, Willstedt said.

Spain is Europe’s leading market for corporate renewable energy PPAs and developers in other countries have less PPA market options.

Opinions expressed are those of the author. They do not reflect the views of Reuters News, which, under the Trust Principles, is committed to integrity, independence, and freedom from bias. Reuters Events, a part of Reuters Professional, is owned by Thomson Reuters and operates independently of Reuters News.

Spanish retailer Dia to raise pay by up to 12% to cope with soaring inflation
Factbox: Dim the lights: Europe’s retailers scramble to cut energy use