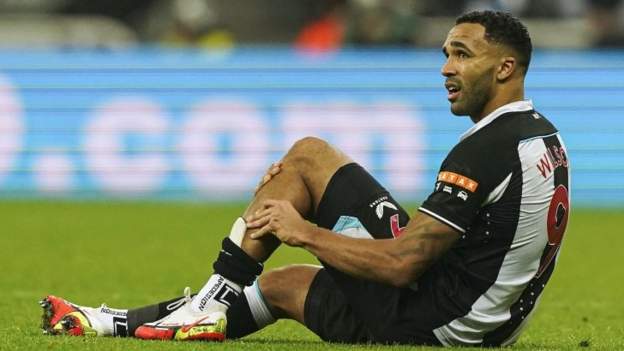 Thursday’s Premier League game between Everton and Newcastle United has been postponed because of coronavirus cases and injuries in the Magpies’ camp.

Newcastle asked for the game to be called off after “a number of players and staff” tested positive, on top of injuries to “several players”.

Callum Wilson and Allan Saint-Maximin were both injured during Newcastle’s draw with Manchester United on Monday.

It means 16 English top-flight games have now been postponed in December.

A Premier League statement said it had “accepted Newcastle United’s postponement application as the club does not have the required number of players available for the match (13 outfield players and one goalkeeper), due to Covid-19 cases and injuries”.

After the 1-1 draw with Manchester United, Newcastle boss Eddie Howe said his side were “dangerously close” to not being able to field a team for the game at Everton.

Meanwhile, it is the third Toffees match in a row to be called off, after meetings with Burnley and Leicester also fell foul of outbreaks and injury problems.

The most recent figures from the Premier League showed a record 103 Premier League players and staff tested positive for Covid in the seven days up to and including 26 December.