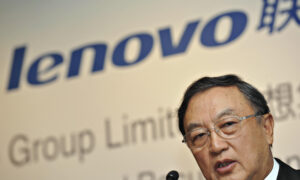 Editor’s note: This article is part two of a three-part series. Part 1 looks at Beijing’s crackdown on Didi and introduces the company’s ties to the Chinese military and state-owned businesses.

The front operation behind Didi Global Inc.’s monopoly is the family of Liu Chuanzhi, the founder of Lenovo Group, who has strong ties with the elite and secretive Taishan Society and the Chinese military. Didi’s president is Liu Qing, the daughter of Liu Chuanzhi.

A post on Chinese blogging platform zhuanlan.zhihu.com claims that the Liu family monopolized Didi and other ride-hailing services in China, including Shenzhou Car on Demand (Shenzhou Zhuanche) and Shenzhou Car Rental (Shenzhou Zuche).

Liu graduated from China’s Military Academy of Telecommunications Engineering (now known as Xi’an University of Electronic Science and Technology). He rose to prominence when Jiang Zemin was head of the CCP. Liu established himself as China’s “Godfather of IT” by serving as president of the Taishan Association and as chairman of the China Entrepreneur Club (CEC).

Lenovo Group was founded in 1984 by a group of 11 scientists, including Liu Chuanzhi, as an investment by the Institute of Computing Technology of the Chinese Academy of Sciences (CAS).

Lenovo was listed on the Hong Kong Stock Exchange in 1994. Since 1996, Lenovo has been the top computer seller in China; and in 2013, became the world’s largest PC manufacturer.

In 1998, Lenovo Group became the major shareholder of Kingsoft. The president of Kingsoft at that time was Lei Jun, who is also the chairman and CEO of Xiaomi Technology Co.

In February, The Epoch Times reported that Kingsoft was established at the request of the Chinese regime’s Commission for Science, Technology, and Industry for National Defense (COSTIND).

On Jan. 14, Xiaomi was blacklisted by the U.S. Department of Defense over its ties with the Chinese military company.

“CAS founded and is still a parent of Lenovo; CAS owns 35 percent of Legend Holdings (an asset management arm of CAS), which has a 31 percent ownership stake in Lenovo. The Chinese government remains the largest shareholder of Lenovo,” wrote James Marks on Sept. 12, 2019, in The Bulwark.

Marks is a retired U.S. Army major general who worked in the intelligence service for several years. “The Chinese Academy of Sciences (CAS) serves as a case study for how a state-controlled institution uses its resources to meet the objectives of the Communist government,” he said.

However, CAS is more than a research organization or academic institution. According to the congressional U.S.-China Economic and Security Review Commission, it also has “connections to the Chinese military, nuclear, and cyberespionage programs,” wrote Marks.

“Of all of CAS’s ventures, Lenovo remains its greatest success. … In the United States, no manufacturer’s sales have grown more quickly than Lenovo’s. The company boasts of serving over 900 U.S. state and local government agencies.” Marks added, “Lenovo would not have expanded to its current size without support from CAS and the Chinese government.”

“China intentionally blurs the lines between public and private enterprises, to ensure that the nation’s military, espionage, and commercial interests are intertwined,” he said.

Liu Chuanzhi has established himself as a central figure in Chinese entrepreneurial circles, including the Taishan Association and the China Entrepreneur Club (CEC), according to a Dec. 18, 2019 article by 21st Century Business Herald.

Founded in 1993 and disbanded in 2021, the Taishan Association’s members are influential in the business community.

As a secretive chamber of commerce, the association had strict regulations—no publicity, meetings were never recorded, and local leaders weren’t invited to the meetings, according to the 21st Century Business Herald report.

Another entrepreneurial circle in which Liu Chuanzhi is active is the China Entrepreneur Club (CEC). Founded in 2006, the club’s members include Alibaba founder Jack Ma and Wanda Group founder Wang Jianlin.

According to the CEC’s official website, Liu and Ma are now honorary chairs of the club.

As the “vanity fair” of China’s top entrepreneurs, the club has a demanding set of qualifications for its board members, who must be recommended by two board members and appointed by all board members unanimously.

Liu Chuanzhi is also close friends with Ren Zhengfei, the founder of Huawei. Liu once claimed that Ren was the person he most admired and appreciated.

In June 2020, the U.S. Department of Defense placed Huawei Technologies on a blacklist due to its ties with the Chinese military.