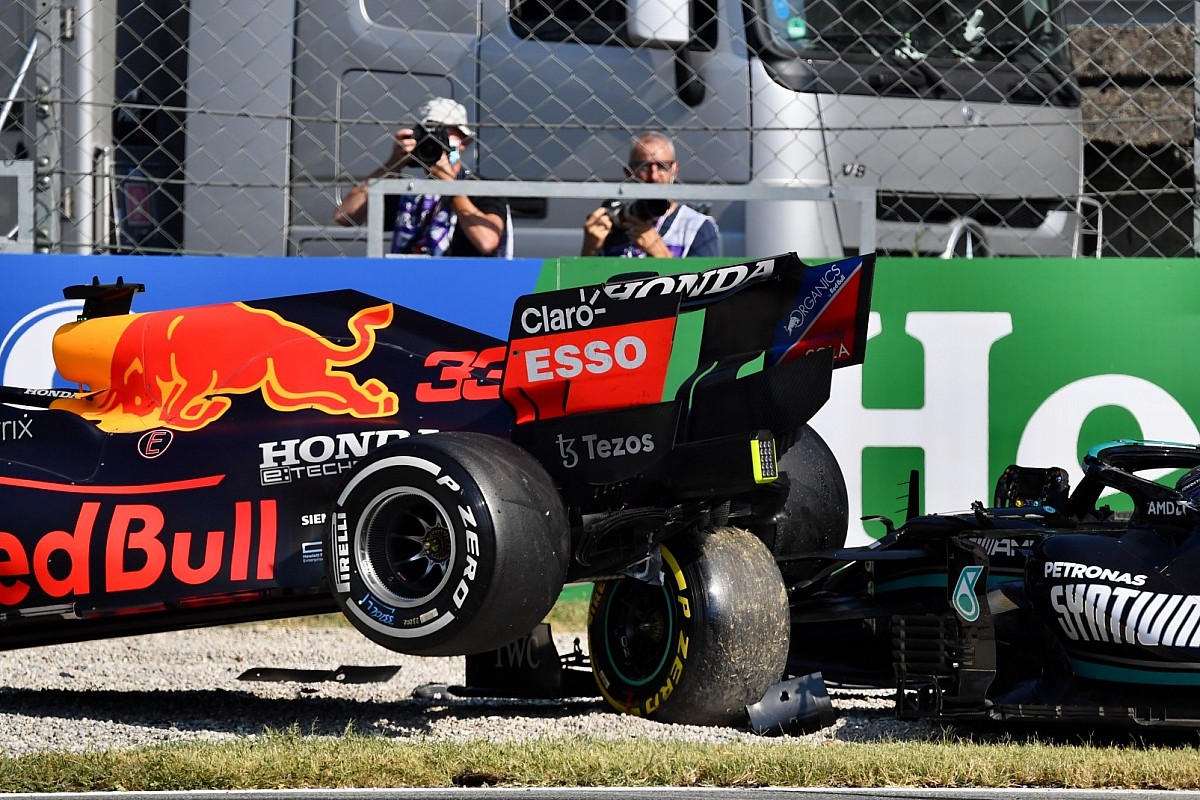 Hamilton escaped with just a sore neck after being involved in a collision with his F1 title rival as they battled for position at the first chicane at the midway point of the Monza race last weekend.

Still photos that emerged after the race showed Verstappen’s wheel striking Hamilton’s helmet, but the new footage published by F1 offers a close-up insight in to what happened exactly.

Looking back from the 360-degree camera that all cars carry on their nose, the footage shows Verstappen’s car rising up above the left hand side of Hamilton.

At first, Hamilton’s halo is hit by the floor area just behind the sidepod of Verstappen’s Red Bull, as momentum then carries the RB16B over the top of the Mercedes.

As the Red Bull moves forward, if then dips down to the left as the bottom of the floor slides along the halo near Hamilton’s head.

It is when Verstappen’s right rear wheel, which has scraped along the top of Hamilton’s engine cover and roll hoop, moves forward in front of the airbox that it then drops down and strikes the top of the seven-time world champion’s helmet.

Hamilton’s head can be seen being pushed down and to the front, before the Red Bull carries on rolling forwards and eventually ends up nose first in the gravel.

Speaking after the Italian Grand Prix, Hamilton has been clear how lucky he had been in the crash – and was in no doubt that the halo had saved him from serious injury or death.

“Thank God for the halo that ultimately I think saved me and saved my neck,” he said. “I think in the actual moment, it was a big hit. But all I could think of is, could I get going again?”

Photos of Hamilton walking away from the crash showed that the impact with Verstappen’s wheel had broken spoilers on top of his helmet.

The 360-degree camera from the front of Verstappen’s car captures the moments after the incident, as the Dutchman briefly tries to get going again before giving up and getting out of the car.