Fed Up With The Ruling Class

Home /General/Fed Up With The Ruling Class 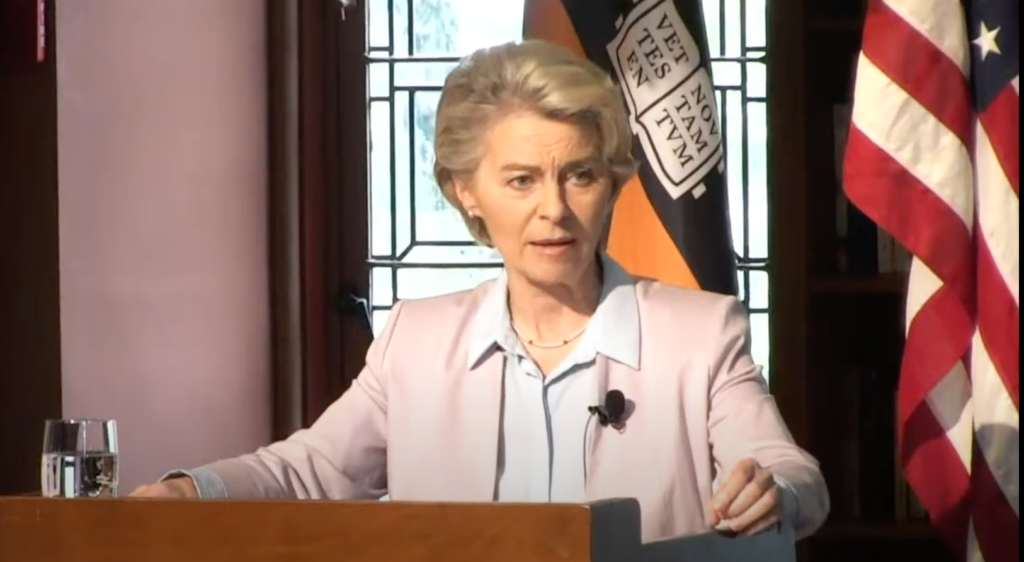 Fed Up With The Ruling Class

Above, European Commission chief Ursula von der Leyen, speaking to American elites at Princeton University, threatens Italians if they vote the wrong way this weekend. More on this in a moment. But first:

Item, about the Italian election this Sunday, in which the “far right” (says our media) candidate Giorgia Meloni is expected to win enough seats in Parliament to become prime minister:

To which Douthat brilliantly ripostes:

Lord, ain’t it the truth. I was having dinner recently with a Catholic priest, who was talking about the power of the more progressive older generation over the structures within the institution, despite the fact that most of the younger priests and seminarians are orthodox and traditional. This priest said, “The progressives in the Church have power, but it is only the power to destroy.”

Similarly with social liberals. It doesn’t work! It goes against human nature. I’m reading right now Louise Perry’s great new book The Case Against the Sexual Revolution. She’s not a religious person, and not even a conservative. She is a postliberal feminist who rejects the standard liberal feminism take on sex. Her basic argument is that the Sexual Revolution has, for the most part (but not entirely!), been a failure. She speaks of the “sexual disenchantment” that has resulted from generations being trained to see the sex act as divorced from moral or metaphysical meaning. “Sexual disenchantment,” she writes, “is a natural consequence of the liberal privileging of freedom above all other values, because, if you want to be free, you have to take aim at any kind of social restrictions that limit you, particularly the belief that sex has some unique, intangible value — some specialness that is difficult to rationalise.”

Liberal ideology flatters us by telling us that our desires are good and that we can find meaning in satisfying them, whatever the cost. But the lie of this flattery should be obvious to anyone who has ever realised after the fact that they were wrong to desire something, and hurt themselves, or hurt other people, in pursuing it. So I am going to propose an alternative form of sexual culture — one that recognises other human beings as real people, invested with real value and dignity. It’s time for a sexual counterrevolution.

It’s important to note that Perry says that social liberals have done to the body what economic liberals (also sometimes called conservatives) have done to the economy. That is, they have adopted a dogmatic view that fails to recognize the spiritual and moral dimension of the material acts (sex, getting-and-spending, etc.). This is what Larry Summers doesn’t understand — and not only Larry Summers. People are desperate for a sense of meaning. We have stripped it bare from them, all in the name of liberation. No wonder people are immersing themselves in porn, in dope, in debasement: we have created a system that has stolen from them the capacity for ordinary human happiness.

How do we rebuild it? I don’t know. But I can tell you that in Europe, the kinds of politicians that our media and the Regime class call “far right”, have greater insight into this problem than the Regime. You know why they hate Viktor Orban? Because he understands that a successful country, a country where most people thrive, is one where people have stability, and they can have natural families. They are postliberal in the sense that they believe an economy should be administered with the greater good in mind; as Ron DeSantis said recently at NatCon (this is a close paraphrase), “America is a country with an economy, not the other way around.” And they also know that maximal liberty in social matters is a sure way to anomie and destruction. That desire is not self-justifying.

I’m in Toronto today, a city where the institutional leaders of a suburban school system cannot figure out how to prevent a cross-dressing sex pervert from wearing massive prosthetic boobs, of the sort associated with an exotic Japanese form of pornography, to his job as a public high school teacher! To object to it, they say, would violate his — they say “her” — human rights. It’s madness. A society that cannot defend its own minors from being exploited by a pervert like this in a classroom is not a society that deserves to stand — nor will it be able to stand. It’s Weimar, it’s late Rome. If liberal politicians — progressive liberals or conservative liberals — won’t do anything about it, we should not be surprised to see illiberal politicians rise in popularity, in an attempt to restore order and sanity.

Ursula von der Leyen, the imperious European Commission chief, has just made it perfectly clear where the EU elite stand on democracy. Democracy is only good when you vote the way Brussels and the elites want you to. If not? Well, they have ways of making democratic people feel the pain. Watch her threaten Italy if it doesn’t vote the correct way this weekend:

Get weekly emails in your inbox

By mentioning Poland and Hungary as examples of nations the EU has roughed up over their democratic politics, von der Leyen lets the cat out of the bag. Italy has not even voted yet, but she says to the Italians, “You see what we did to Poland and Hungary? Would be a shame if that happened to you.” Von der Leyen and her EU clique have been going after Poland and Hungary on so-called “rule of law” issues — but she makes it clear in this remark that this was simply a pretense to punish those countries for having the bad taste to elect right-wing populist governments.

I hope this clip is widely spread among European peoples, so it will be absolutely clear to them all what the elites think of them. This winter, when Europeans are freezing in the dark, I hope the crowds show up at Madame von der Leyen’s palace, demanding accountability for having led the EU into blowing up its own economies for the sake of serving the Brussels-Washington vision. Analysts say that Europe’s recent moves to the Right have to do with people being fed up with crime and out-of-control immigration. Von der Leyen and her elite class, like their American counterparts, expect the ordinary people to put up with it, or stand accused of bigotry.

The arrogance of that woman, and the class she represents, is breathtaking! If Italy goes to Meloni’s party, that will mean that over 100 million Europeans — 60 million Italians, 37 million Poles, and 9 million Hungarians — will be living under democratically chosen conservative governments. Von der Leyen & Co. don’t believe the choices of majorities on those countries are legitimate — and they are prepared to punish people for not doing their bidding. Larry Summers, you need to watch what is going to happen in Europe, and understand that it’s not a mystery why people are fed up with the ruling class.

Nuclear War With Russia? No, Thanks
Giorgia Meloni: The Woman Of Europe’s Future