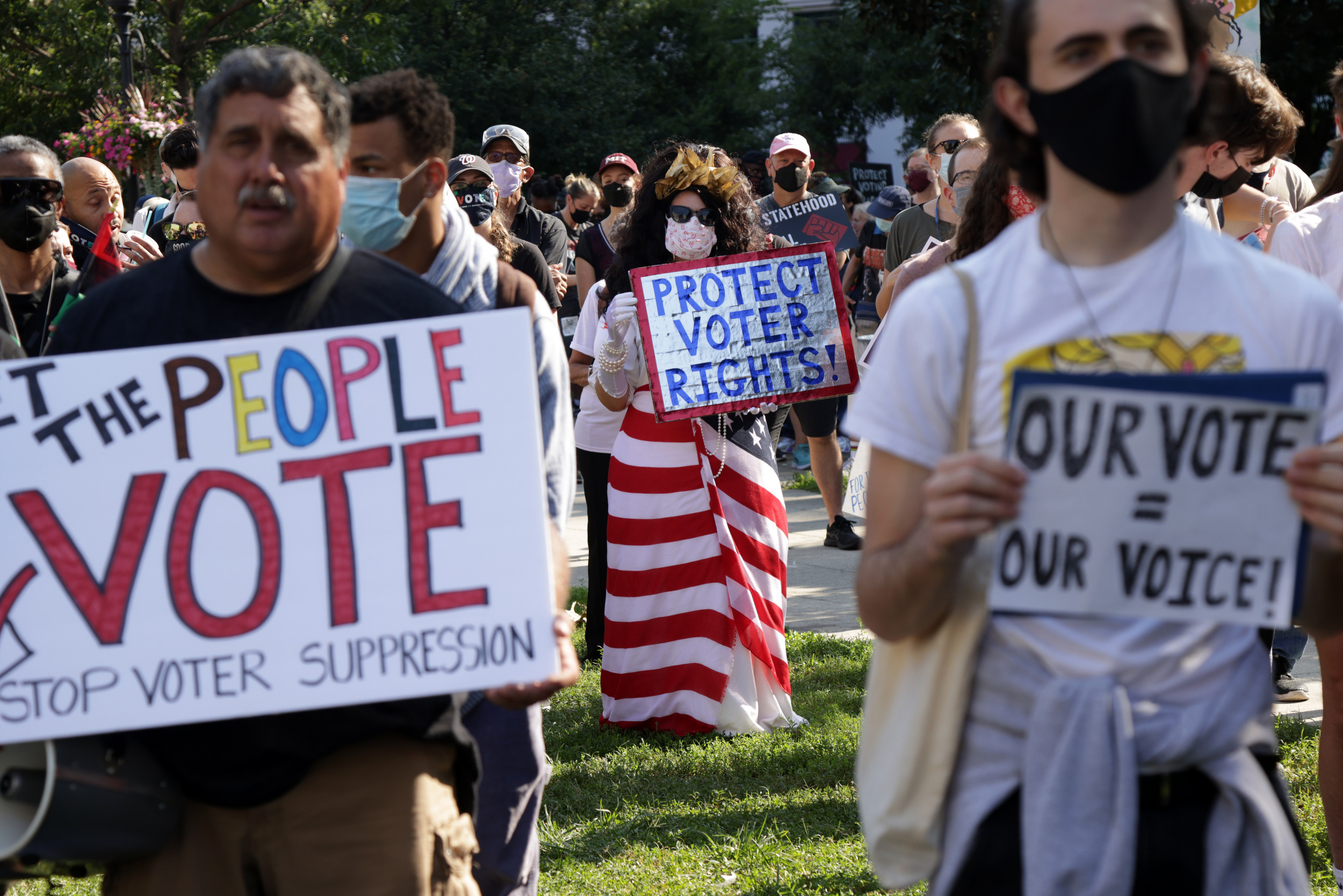 President Joe Biden urged senators to “stand against voter suppression” in a speech on Tuesday, January 11, 2022, calling on Congress to pass voting rights legislation, which has been blocked by a Senate filibuster in recent months.

Joined by Vice President Kamala Harris on the grounds of Georgia’s Morehouse College, the president called for the passing of the Freedom to Vote Act, which Biden said would help “protect our democracy.”

The Freedom to Vote Act would help eliminate voter suppression throughout the country, especially in several Republican states where restrictive voter laws were passed in 2021.

The president also called for the passing of the John Lewis Voting Rights Advancement Act, which would also put measures in place to end voter suppression.

With both acts having been blocked by Republican senators, Biden called for an end to the filibuster.

What Is a Filibuster?

A filibuster is a motion carried out by the Senate that’s “designed to prolong debate and delay or prevent a vote on a bill, resolution, amendment, or other debatable question,” explains the Senate website.

The tactic allows for “unlimited debate” on proposed legislation, essentially preventing it from being passed by talking a bill to death.

Stemming from the Dutch word for “pirate,” the term filibuster became popular in the U.S. during the 1850s when it referred to efforts made to hold the Senate floor to prevent action on a bill.

According to the U.S. Congressional Research Service: “Filibustering includes any use of dilatory or obstructive tactics to block a measure by preventing it from coming to a vote. The possibility of filibusters exists because Senate rules place few limits on Senators’ rights and opportunities in the legislative process.

“Most bills, indeed, are potentially subject to at least two filibusters before the Senate votes on final passage: first, a filibuster on a motion to proceed to the bill’s consideration and, second, after the Senate agrees to this motion, a filibuster on the bill itself,” the service explains.

Why Is the Filibuster Tactic so Controversial?

With the 50-50 split between Democrats and Republicans in the current Senate, filibusters have been especially controversial in recent years.

Democrats fear they won’t be able to gain the 10 Republican votes needed to end filibusters on significant legislation for voting rights as well as other major national issues, such as LGBTQ rights and immigration.

Voting rights legislation has been at the forefront of the debate around the filibuster in recent months as Republicans embrace tighter voting restrictions in some states.

At least 19 states have passed 33 new laws in the last year, which created stricter voter identification requirements, scaled back early voting periods and shortened vote-by-mail deadlines, among other new restrictions, according to the non-partisan Brennan Center for Justice at the New York University School of Law.

Last year in Georgia (a key battleground state in the 2020 elections), a bill rewriting election rules was signed by the state’s Republican Gov. Brian Kemp.

The bill has given the state’s election board the authority to intervene in county election offices and to remove and replace local election officials. The move raised concerns that the Republican-controlled board could further influence the administration of elections, including the certification of county results, according to the Associated Press.

With increasing polarization between Democrats and Republicans, the number of filibuster votes has climbed dramatically in the last 50 years, from six during 1969-1970 to 298 in the 2019-2020 legislative session, according to Reuters.