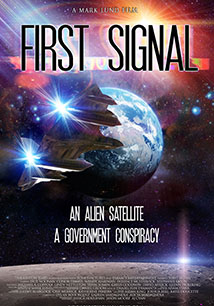 The Massachusetts premiere of the science fiction drama First Signal will take place on June 27, 2021 at The Strand Theatre in Clinton, MA. The independent film has won 17 film festivals.

At the time of this announcement First Signal has been an official selection of 27 film festivals, winning 17 including Best Feature, Best Director, Best Screenplay, Best Actor and Best Actress. First Signal – when Air Force Space Command receives a signal from an alien satellite in Earth orbit an emergency meeting with the President reveals a government conspiracy – represents the first installment in the First World Universe.

“It’s great to be back at the Strand with my latest film First Signal,” said Lund. “Having partially filmed First Signal in Massachusetts, it’s exciting to present the film to a local audience. From their state-of-the-art projection systems, to their diverse menu, the Strand is an excellent way to experience a movie.”

Strand Theatre owners, Rob Nierintz and Bill Grady are, “Thrilled, once again, to be able to support local film makers, and are delighted to have been selected for the Massachusetts premiere of First Signal.”

The Strand Theatre was built in 1924 and initially operated as a vaudeville theater and silent movie house. Currently, the Strand Theatre offers a unique twist in movie entertainment. Known in the trade as a Cinema Pub, Drafthouse or Grille, The Strand Theatre offers movie patrons the ability to enjoy a casual light meal and drink while watching a current motion picture on the big screen, with state-of-the-art sound and service in a comfortable and relaxing atmosphere.

About First Signal
For more information please visit the official website at https://www.firstsignalmovie.com/

About Mark Lund
Mark Lund is an award-winning filmmaker, screenwriter and publisher. He is also a TV personality and actor.