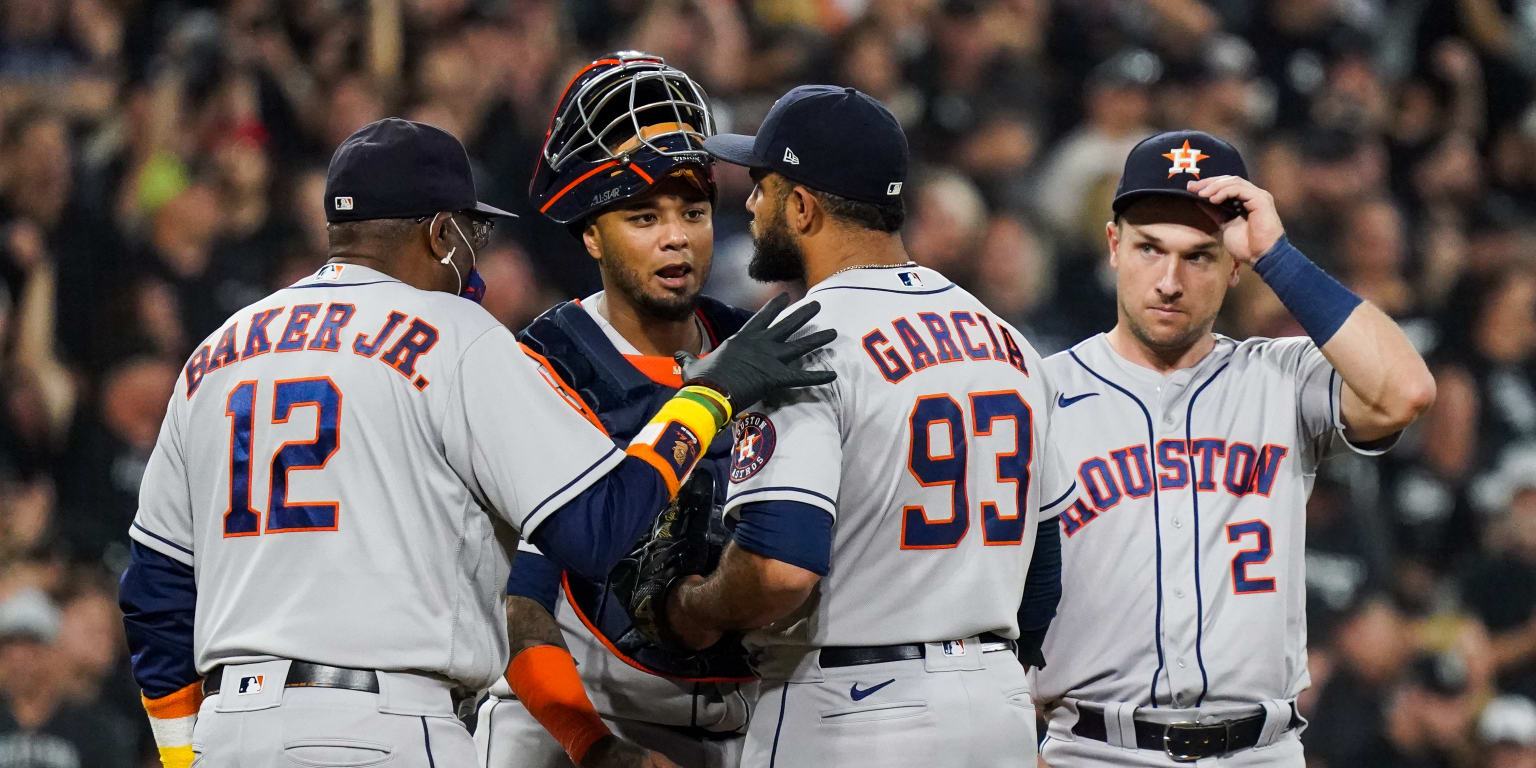 CHICAGO — Kyle Tucker’s third-inning homer Sunday night brought smiles all around the visiting dugout at Guaranteed Rate Field, where the Astros had opened a four-run lead and briefly took control of Game 3 of the American League Division Series.

There was certainly nothing wrong with celebrating the moment, but the Astros knew nothing was going to come that easy in October. Especially against a White Sox team that had its back against the wall and was feeding off a raucous blackout crowd eager for its first home playoff game since 2008.

No sooner had Tucker finished giving high-fives in the dugout did things turn awry for the Astros, who watched the game spiral out of control on a steady stream of White Sox hits — and one controversial call — as Chicago rallied to keep its season alive with a 12-6 win on a long night on the South Side.

“The momentum goes day to day,” Astros manager Dusty Baker said. “We got to flush this one and come back tomorrow.”

The Astros lead the best-of-five series, 2-1, and can clinch their fifth consecutive trip to the AL Championship Series with a win in Monday’s Game 4.

“We’ve been there before,” Astros catcher Martín Maldonado said. “It’s not the first time we lost a game. I think last year we lost the third game [in the ALDS] against the Oakland A’s, so I think we’re going to go out there and play hard like we always do. I don’t think that’s changed the outcome of our mentality going into tomorrow’s game.”

The Astros struck out a season-high 16 times, including 11 in the final six innings, as the White Sox sent down the final 16 Houston hitters following a game-tying RBI single by Alex Bregman in the fourth. That was enough for Chicago reliever Ryan Tepera, who threw two scoreless innings, to suggest the Astros might have been stealing signs while at bat in Games 1 and 2 at Minute Maid Park.

If nothing else, that adds some spice to the rest of the series. The Astros, of course, were punished by Major League Baseball for using cameras to steal signs in their World Series run in 2017.

“They’ve had a reputation of doing some sketchy stuff over there,” he said. “We can say it’s a little bit of a difference. I think you saw the swings and misses tonight compared to the first two games at Minute Maid.”

Conversely, the White Sox, who had five runs and 18 hits in the first two games on the road, produced 16 hits in Game 3 at home. That included a five-run third inning that chased Astros starter Luis Garcia after 2 2/3 innings. Baker brought in Yimi García to face Leury García after Luis Garcia fell behind, 2-0, in the count, and Leury García hit a 436-foot, three-run homer to put the White Sox ahead, 6-5.

“Well, No. 1, he wasn’t sharp,” Baker said of Luis Garcia. “[Leury] García, according to the stats, is a better hitter left-handed than right-handed, and so that’s why we went to [Yimi García] because he wasn’t sharp.”

The White Sox added three more in the fourth that were charged to García, one of which was the result of a controversial play.

With runners at first and third and no outs, Yasmani Grandal hit a grounder to Astros first baseman Yuli Gurriel, who chose to throw home to try to get Luis Robert at the plate. The throw glanced off Grandal as he ran up the line and went all the way to the backstop. Robert scored. The Astros argued it was interference on Grandal.

“I mean, that was a smart play on his part, and that was the explanation that they gave me that they didn’t see anything wrong with the play,” Baker said.

The umpires huddled and decided Grandal did nothing intentional to get hit with that ball and had established his running line. The play may not have meant much in the long run. The White Sox already had the lead and proceeded to shut down Houston’s offense the rest of the night.

“It’s really a tough-minded bunch, and sometimes you get rewarded with a comeback like that, but it’s just the way we’ve been,” White Sox manager Tony La Russa said. “We know we got some offense, and if we can hold them down, we know we got a shot. Sometimes it works. Sometimes it doesn’t, but, I mean, it was electric in that dugout. Nobody was giving in.”

The Astros lamented some questionable calls, but Maldonado said it went both ways.

“I think the strike zone was a little bit inconsistent where we like to be, and I know they made some calls from both sides,” he said. “You know, I think it was a tough night. You can’t do much when an umpire calls the balls and everything [or] argue too much because, you know, you never see an umpire overturn the call.”