Former NBA All-Star Confident Bucks Can Get Past Nets, Lakers, Clippers & Sixers to Win the Title 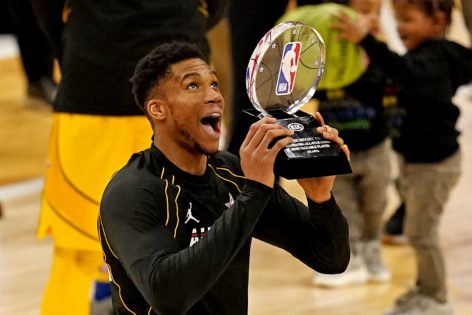 In the last decade of the NBA, you couldn’t pick more than two teams as the contenders for the NBA title. Miami Heat ruled the roost in the first half of the 2010s, while the Warriors picked their way to total domination in the second. But that is changing now with the likes of the Lakers, Nets, Sixers, and the Clippers all equal favorites to take home the Larry O’Brien trophy this season.

But former Milwaukee Bucks star Michael Redd thinks otherwise. Redd became an NBA All-Star and made the All-NBA Third Team with the Bucks during his playing career, so he knows where his allegiances lie.

“Well, the Bucks. I think the Bucks are right there,” Redd replied when asked to pick his leading contender for the NBA Title on 1-on-1 with Basketball Network Podcast.

But even before one can talk about them becoming the NBA Champions, the first monumental task for them is to come out of their own conference and reach the NBA Finals. Admitting the tough road that lies ahead of them, Redd said, “I think if they can get past Boston, Philly, and Brooklyn. Those are the main competitors I see right now. So tall order to ask, but I think they are more than capable of doing it.”

This Nets player is Michael Redd’s favorite to watch

Redd played as a small-forward for much of his playing career. He was an elite shooter who could pop up from almost anywhere. His favorite player also has the same skill set, but he possesses a bigger frame. Redd said:

“I have always been a Kevin Durant fan, even when he was a young fella and I was playing against him. Just to be at that height, at seven-foot, and to do all the things that he can do is just really special. So gifted in every facet and just a joy to watch because he plays as if he’s a guard at seven feet… Defensively he’s got better over the last five, six years… He’s the total package.”

Game recognizes game. While no one would bat an eyelid if Redd told them his favorite player, they might just do so if he lets them know his leading contender for the NBA Title.

Get notified about breaking news and watch highlights on the go; join the Arena on NBA Hoops

‘Best Movie I’ve Seen in a Long While’
Sainz Has No Chance Against Leclerc at Ferrari for Now: “We Know Internally”