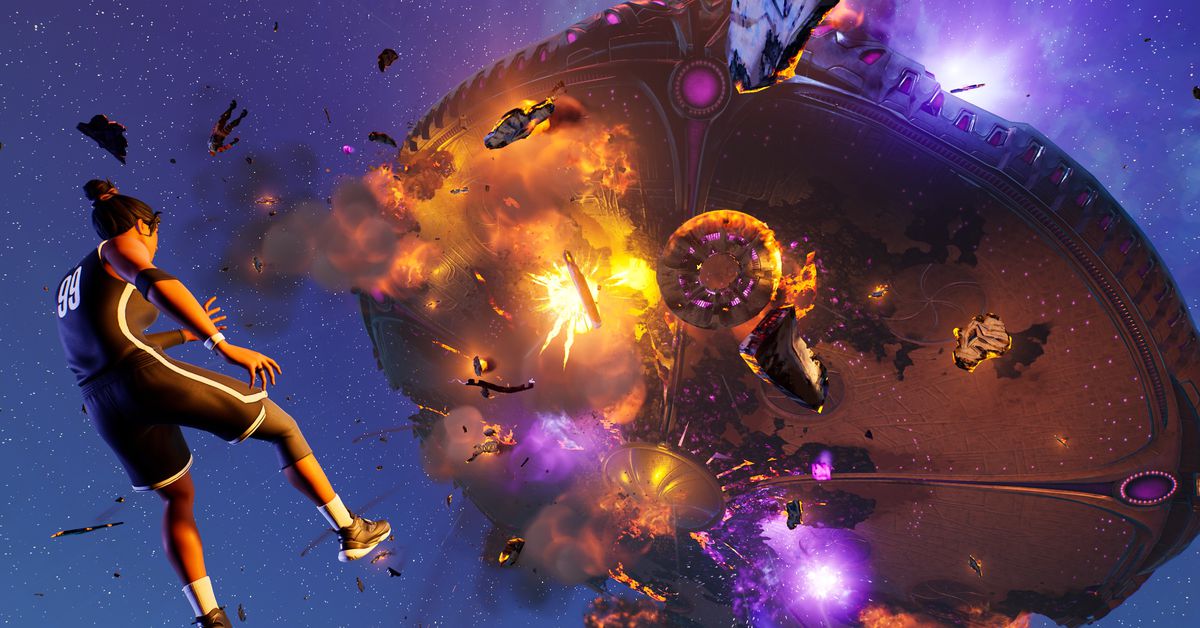 The latest live Fortnite event saw the return of a familiar friend, with an explosion-filled spectacle involving aliens, cubes, and lots of strange bits of lore. And now that it’s over, the game is down in the lead-up to season 8.

Before the event started, players were able to hang out in a sort of holding pen, located on some chunks of farmland floating above the island. They were greeted by the booming voice of Doctor Slone — the main protagonist, or possibly antagonist, of this season — who warned “the aliens are about to start their biggest abduction yet.” In my instance of the game, everyone jumped on top of the same grain silo and danced for 20 minutes before the event actually kicked off.

When that happened, players were initially sucked onto the giant alien mothership that has floated above the island all season long, and were able to actually explore it, running down long pink and purple sci-fi hallways together while following Slone’s orders. The goal, according to Slone, was to use some fancy backpacks to arm explosives that would take down the ship for good.

Things, of course, didn’t go exactly as planned, and eventually players were shut in a room with fan-favorite character Kevin, the massive cube that rolled around Fortnite’s island in 2018. The cube started out a familiar bright pink and purple, before eventually going dark for a brief period — at which point Slone made it clear this would be a suicide mission. Players were then able to commune with Kevin; he turned a happy shade of blue before creating an escape route. Eventually, everyone was brought to a huge room full of lots of giant cubes, revealing that Kev isn’t alone in the universe.

That’s when everything exploded in a scene ripped right out of Independence Day, and pieces of the alien ship — cubes included — fell towards the island. As with past live events, players couldn’t really affect what happened. It was more of a strange-yet-fun rollercoaster, with millions along for the ride. The experience most closely resembled Fortnite’s very first single-player mission, which kicked off season 6.

If you don’t play Fortnite, that was a few hundred words of gibberish, but for those who are invested in the strange world, the alien event was yet another example of Epic’s increasingly expansive narrative ambitions. The event ended with a timer, which is now counting down the minutes to season 8 — which starts tomorrow, September 13th. Until then, Fortnite is down and unplayable.