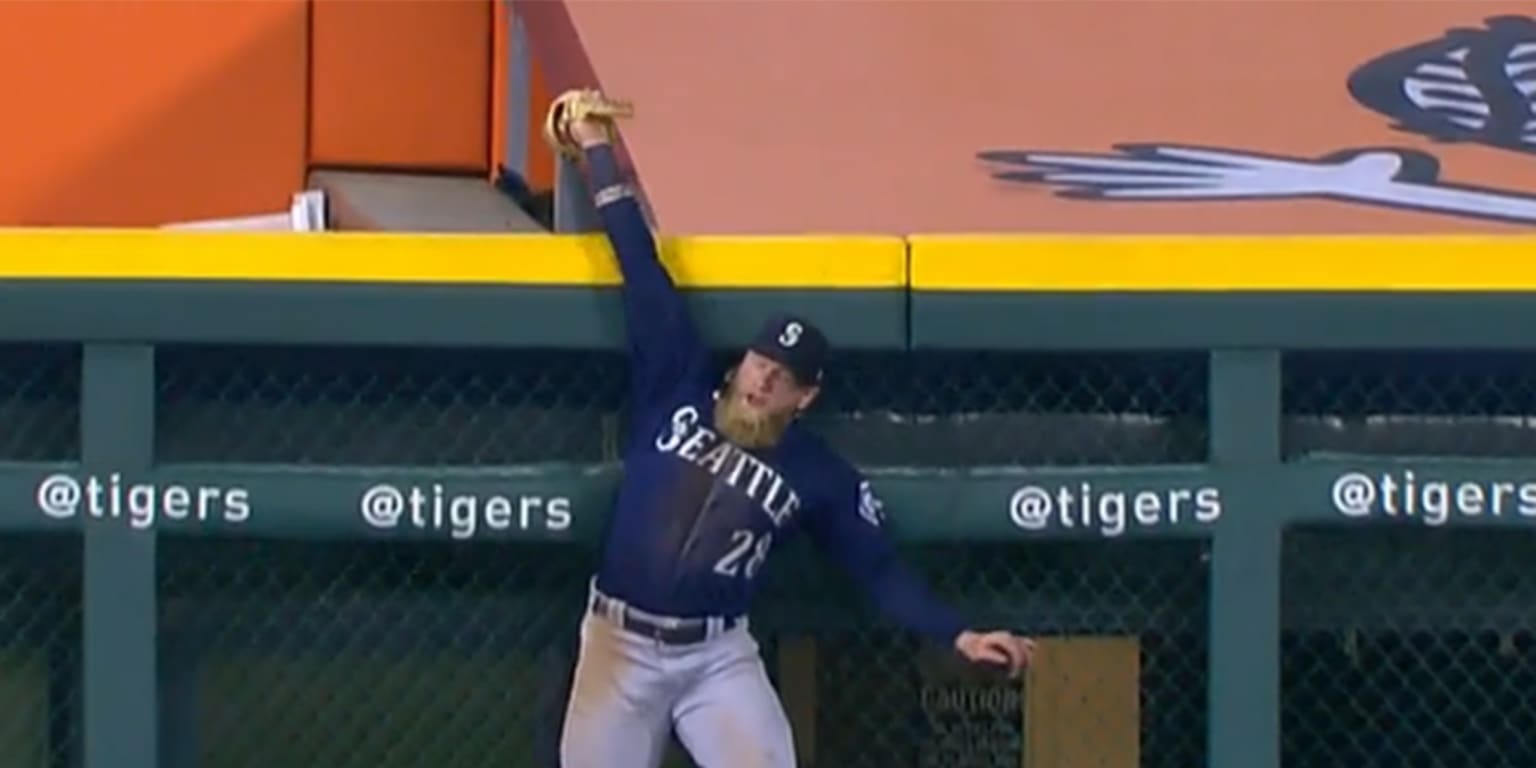 DETROIT — The Tigers’ bullpen was already celebrating what looked to be a sure walk-off homer off the bat. It had that sound. It had that look. It had that trademark eruption from a season-high crowd at Comerica Park.

But Jake Fraley spoiled those celebrations by snowconing the sky-high liner from Isaac Paredes in the bottom of the ninth with his entire right arm above the left-field fence — and directly in front of those Detroit relievers who still had their hands hoisted over their heads, thinking they were headed to the plate to take part in a Gatorade shower.

It was the catch of the season for the Mariners, who went on to a 9-6 win in the 11th inning, and it’s certainly in the conversation for all of Major League Baseball.

Pinch-runner Eric Haase, who entered after Miguel Cabrera led off the inning with a single, was so convinced it was outta here that he was already rounding second base, and as such, was doubled up by Fraley to end the inning and make it a Seattle stunner after — guess who — Fraley lined the go-ahead RBI single up the middle two innings later, sparking a decisive five-run 11th.

The win evened the series and set up Thursday’s rubber match.

Here’s a breakdown of the play from those who had the closest view:

• Fraley was lined up 300 feet from home plate, a solid five feet back further than he normally plays, according to Statcast. That put him in position to get to the wall and measure the ball’s trajectory in perfect harmony to make the play in time, with just five seconds to cover 61 feet. His right forearm was yanked back by the ball’s momentum, but Fraley kept his wherewithal on the runner, which allowed him to rocket the throw back for the double play.

“We were playing ‘no doubles’ so that was huge,” Fraley said. “ It saves you, especially when you’re going back on a ball like that. If you’re at normal depth, quite honestly, nine times out of 10, you don’t make that play. It’s over the fence. So the fact that we were ahead of the game, playing ‘no doubles’ was huge because I was able to get back to the fences a lot quicker.”

• Beyond the fans and Tigers’ bullpen, even most of the Mariners thought this one was gone. The ball left Paredes’ bat at 96.5 mph and it traveled a projected 369 feet. Statcast measured that it would’ve been a homer in 10 big league ballparks.

Manager Scott Servais: “I’m holding my breath. That’s what you do in the dugout — you hold your breath and hope he can get under it. I knew it was going to be close. But the other thing for me is watching the replay up on the board afterwards, looking, their bullpen, side angle, everybody in their bullpen is up, and then they just dropped their head. And we were going crazy.”

And Dillon Thomas, who had an adjacent vantage point while playing right field: “Taking hits away, saving runs, that’s what you think about, those are the plays that you think about when you’re out in the outfield. … That’s Jake in a nutshell. Crashing into the wall, laying out for balls, that’s him. And that was a huge play for us.”

And starting pitcher Chris Flexen, who was watching in the clubhouse after his outing: “I thought it was a great pitch [from Drew Steckenrider], and see him keep going back, back and jumps up and catch it, and I threw my hands on my head, and was just like, ‘Wow.’ An inning-ender like that, too, with a double play. Unbelievable.”

• Lost in the highlight was Fraley’s impressive throw to the cutoff man, a dime well to Shed Long Jr. with no hops on the ground. Long then flipped it to Ty France just as Haase was breaking into his slide, completing the play with time to spare.

“There was a lot to digest in that game, but that was an emotional turn of events when you think the game is over and it turns out to be a double play, and you’ve got to still play,” Tigers manager A.J. Hinch said. “But yeah, that was a frustrating turn of events.”

This is the second win on this road trip that had Fraley’s stamp on it. After an incredibly tough 2020, in which he was basically limited to the alternate training site, then a stalled start to ’21 with a left hamstring strain that sidelined him nearly two months, Fraley is healthy, happy and producing.

“It’s everything,” Fraley said. “When you go through tough times in this game, man, you learn real quick that you’ve just got to put your head down and keep going forward. And that’s exactly what I’ve done. … I’m just coming out there every single night to try to have as much fun as I can.”