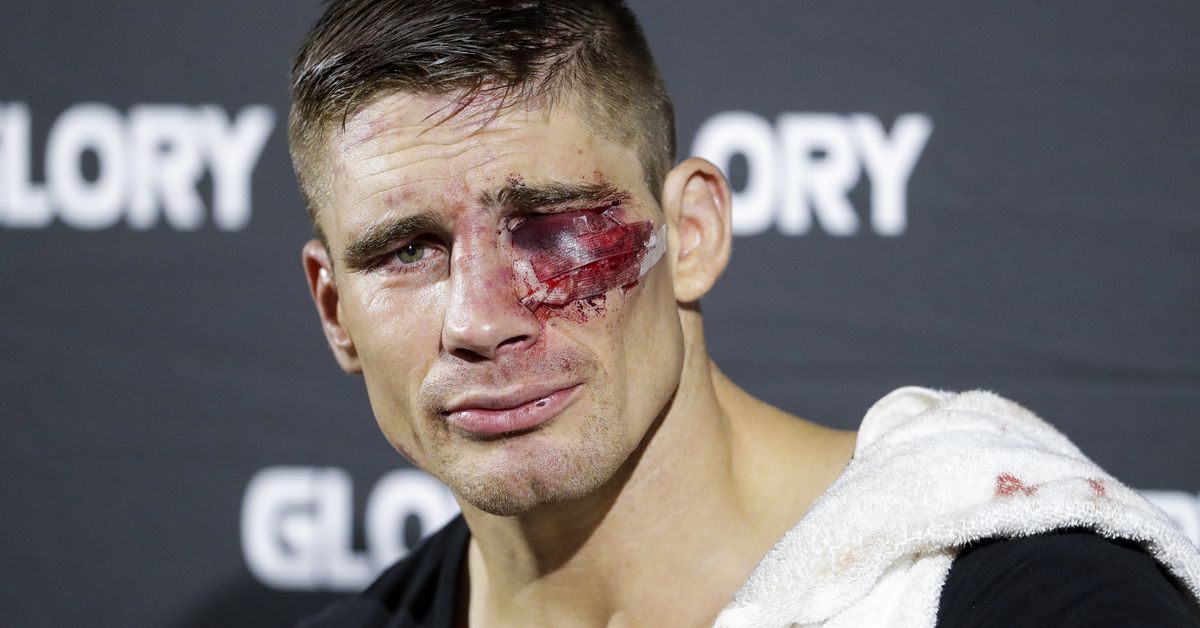 (WARNING: Graphic images and videos throughout this article)

It is that time of year again. The time when I scour the Internet for the scariest combat sports injuries that took place during the month of October and compile them in a list for your delight (or disgust??? … I’m sorry) in celebration of my favorite holiday. If you are unfamiliar with the Fright of the Night series, then feel free to get acquainted with it and read Volume One before you tear into Volume Two. Trust me, it is worth it.

Just a quick reminder before we get started, injuries that did not happen while in competition are excluded from this list, so do not expect to see Paulo Costa and his torn bicep ahead of his fight against Marvin Vettori at UFC Vegas 41 on here.

Ready to get spooked? Let’s go!

A few injuries deserved recognition this month, but I had to whittle the list down to five entries to keep the structure of the series the same. And then I remembered how badly Joet Gonzalez had his face busted up throughout the fight against Emanuel Navarrete and decided an honorable mention was warranted, so here we are.

Navarrete and Gonzalez were involved in a ‘Fight of the Year’ candidate, but only one of them looked as though they had been to hell and back. Spoiler alert: it was not the champion. Navarette outworked a very game Gonzalez, who dealt with the usual volume-heavy approach of his opponent better than expected. However, the 28-year-old couldn’t avoid every single punch, and wound up cut open around each eye. To make matters worse, his right eye started to swell up and the end result… it was bad. The more punches he took from Navarette, the more his eye ballooned and started to close. His cutman Mike Bazzel expressed concern over it, but Gonzalez did Gonzalez things and fought through the injury. It was a valiant effort, but not enough for him to best the champion and leave with the WBO featherweight belt. He did leave with a few bumps and bruises, pictured below.

Navarette acknowledged how strong of an opponent Gonzalez was and said he would give him a rematch in the future. But for now, Gonzalez may be focused on recovering from the damage he suffered in their first outing.

Our list begins with a double whammy that happened several hours ago. There really is no rest for the wicked.

Anyway, we traveled to Abu Dhabi on Saturday and were treated to a preliminary middleweight fight between Albert Duraev and Roman Kopylov. Duraev earned a UFC contract over a month ago on an episode of Contender Series and was the first contract winner from the recent season to make his promotional debut in the same year. He was supposed to meet Alessio Di Chirico, but the Italian was forced to withdraw and Kopylov was tapped to replace him. No matter how you slice it, it was a tough test for Duraev—and it wasn’t long before he found out just how tough the UFC can be. Duraev got cracked with some stiff left hands from Kopylov and before you knew it, his eye was shut and adorned were three different cuts. Ouch. The eye alone was worth talking about, but it would not be the only notable injury to come out of the fight.

Kopylov didn’t escape unscathed either. Duraev secured a takedown in the second round and went straight to work. He tried going for a submission, but figured it was better to posture up and rain down punches and elbows from top control. That decision paid off for him as he brutalized the Russian fighter for what probably felt like an eternity and split his nose wide open. In the midst of that onslaught, Kopylov also sustained a nasty hematoma on his forehead, but it was apparent his nose was far more gruesome than that lump. Duraev and Kopylov went to the judges’ scorecards, which declared the UFC debutant a winner by unanimous decision. Although only one man could be an official winner, both men left the Octagon with tokens of their war and that is a win on all sides in my book.

I wrote it before and I will write it again: Kane Mousah suffered one of the worst cuts in mixed martial arts history. There are no ifs, ands or buts about it.

Mousah returned to the Bellator cage and took on Davy Gallon on the preliminary portion of Bellator 267. You may remember Gallon for his viral rolling thunder knockout of former UFC fighter Ross Pearson (click here to refresh your memory)—the French fighter is certainly no stranger to highlight-reel moments in his career. He earned another one, this time over Mousah. A back-and-forth first round between the lightweight competitors was punctuated by a step-in elbow that sliced open the forehead of Mousah. Gallon tied his opponent up before throwing him to the ground, which meant fans couldn’t see the gash immediately. Once the horn signifying the end of the round sounded, though, we got our chance. Mousah got up and walked over to his corner with blood cascading down his face. His cutman sprung into action, wiped away the sanguine fluid to reveal the laceration and it was a sight to behold. The length and depth of the injury fit the criteria for a doctor stoppage (and I fully believed the fight was going to be stopped between rounds) but it wasn’t! Shocking, right?

Mousah was allowed to keep fighting and put on a competitive performance, but was defeated by Gallon via unanimous decision. He received stitches backstage and has since had them removed, which left behind quite an impressive scar.

A cut like the one Damon Jackson got at UFC Vegas 39 was awful. But was it awful enough to beat out Kane Mousah for the No. 3 spot on this list? Yes it was, and here is why: all of the blood.

Jackson dominated Charles Rosa on the ground and appeared to be on his way to a win, but Rosa had a good moment in the third round that nearly derailed his all but certain victory. Rosa hit Jackson with a spinning elbow that connected on the side of his head with a resounding thud. Jackson followed through and grabbed Rosa to score a takedown but as we would soon find out, that elbow made things a lot worse for the UFC veteran. The corner of Rosa and play-by-play announcer Jon Anik quickly noted that Jackson was “leaking something fierce” and when the camera angle changed, there was a pool of blood already on the canvas. Amid the heavy bleeding, Jackson had a large cut next to his eyebrow. To his credit, however, he continued to fight and go for submissions. But, every time he attempted to secure one, he would literally squeeze out even more blood from his head. Honestly, the amount of blood there was almost equaled the amount Stanley Kubrick used to fill up the elevator from that iconic scene in The Shining. I wish I were kidding.

Jackson survived and got the win. He required 18 stitches to close up the cut. Check it out below (courtesy of Damon Martin of MMA Fighting).

Rico Verhoeven won the war against Jamal Ben Saddik, but his recent battle at Glory: Collision 3 will not be forgotten any time soon.

The Glory kickboxing heavyweight champion put his title on the line against a familiar foe in Ben Saddik, who stepped in as a short-notice replacement for an injured Alistair Overeem. Verhoeven and Ben Saddik were 1-1 going into this trilogy fight — both men scored technical knockouts over one another — and it defied expectations. Verhoeven was stunned by a barrage of punches early from Ben Saddik that sent him to the canvas. As the champion returned to his feet to beat the eight-count, a deep cut under his left eye was spotted and it got worse as the fight went on. Not only did the cut pull further apart with each punch, but his eye also grew about three times the size of what it should normally look like. Despite the hindrance to his vision, Verhoeven turned the tide against Ben Saddik, who was visibly exhausted by the end of the third round. A few minutes later, the champion put his foot on the gas and stopped the challenger to retain his belt.

Verhoeven thanked Ben Saddik for the test and said he was happy to share the ring with him again, even though he was virtually unrecognizable by the end of the night.

Have you ever seen a sliced open head? Do you want to? Well…here you go.

Danny Roberts scored an upset win over Ramazan Emeev at UFC Vegas 40 after nearly two years away from the Octagon. The fight was super close, and both Roberts and Emeev had their moments, but the most significant one happened in the second round. Emeev uncorked an elbow that opened up a cut on the top of Roberts’ head. Blood poured out of the cut, but it was difficult to see where it was coming from and how bad it was while watching it in real-time.

After the fight, we got a close look at what happened to Roberts’ head. UFC president Dana White shared photos of his head before and after it was stitched up by doctors, and perhaps I should warn you now. This injury is insane and definitely not for the squeamish type. There is a silver lining, though. Dr. David Abbasi — orthopedic surgeon and ringside physician known for his injury breakdowns — revealed that Roberts’ stitches would be easy to remove in about ten days. Good news for someone who had his head torn open!