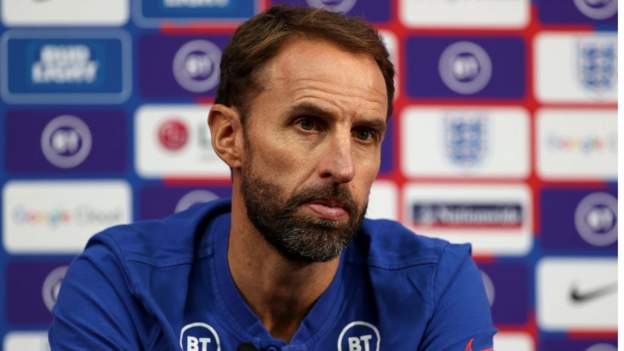 Gareth Southgate says England should “get its own house in order” before criticising others for their behaviour.

England face Hungary in a World Cup qualifier in Budapest on Thursday and home fans can attend despite a Uefa ban for racist and homophobic abuse as the match is under Fifa jurisdiction.

Southgate says England must learn from the Euro 2020 final, when ticketless fans broke in to Wembley.

“We’ve got our own problems. I think we sort ourselves out first,” he said.

Marcus Rashford, Jadon Sancho and Bukayo Saka were all racially abused on social media after missing penalties in the shootout defeat to Italy on 11 July.

“So, I never like it when we look outside when we’ve not got our own house in order.”

Southgate, who described events during the final as ‘carnage’, added that England could face their own stadium ban, with Uefa still to announce their punishment for the night’s events.

“I’m always respectful when I’m travelling away to a foreign country of showing the hosts respect and an understanding that these things can happen, it’s happened in our own country around the final and we’ve still got so much ground and distance to make up ourselves,” he said.

“We still don’t know what the outcome of the investigation into our final is going to be and maybe we end up with a stadium ban,” he said.

“I think we have a long way to go ourselves before we start to comment or pre-empt what might happen in a game somewhere else.”