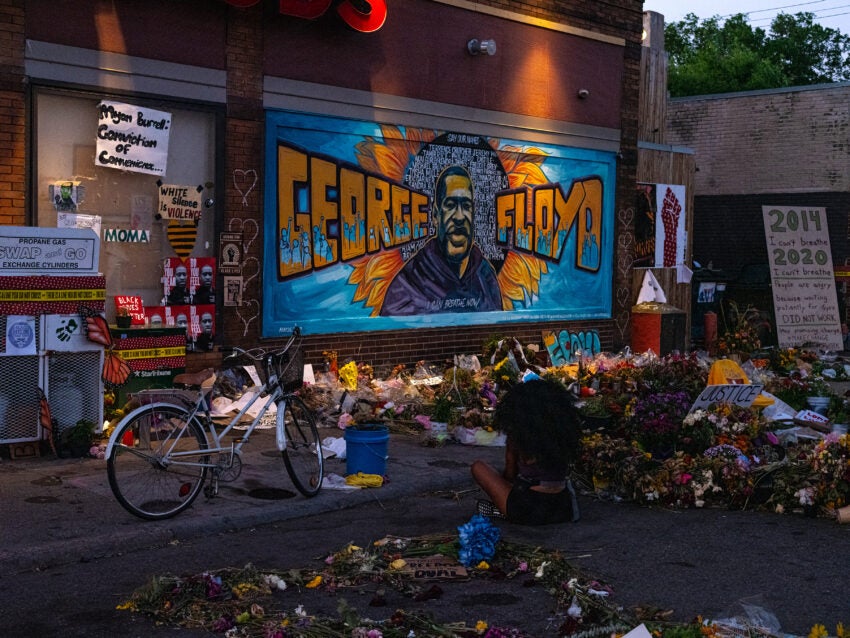 The city of Minneapolis agreed on Friday to pay $27 million to the family of George Floyd, the Black man whose death set off months of protests after a video showed a white police officer kneeling on his neck.

The payment to settle the family’s lawsuit was among the largest of its kind, and it came as the officer, Derek Chauvin, was set to go on trial this month for charges including second-degree murder. As the settlement was announced by city officials and lawyers for Floyd’s family, Chauvin sat in a courtroom less than 1 mile away, where jurors were being selected for his trial.

Mayor Jacob Frey called the agreement a milestone for the city’s future. Ben Crump, the civil rights lawyer who is among those representing Floyd’s family, said it could set an example for other communities.

“After the eyes of the world rested on Minneapolis in its darkest hour, now the city can be a beacon of hope and light and change for cities across America and across the globe,” he said.

But legal experts said the agreement might make it even harder to seat an impartial jury in the case against Chauvin, which was already a challenge because of the attention given to Floyd’s death and the intense demonstrations that followed. In the first four days of jury selection this week, nearly all of the potential jurors said they had seen the video of his arrest, including all but one of the seven selected for the trial so far.

Mary Moriarty, the former chief public defender in Minneapolis, said that the timing could hardly be worse for the court case and that Chauvin’s lawyers might even ask for a mistrial.

She added that the defense team might have reason to worry that jurors’ views could be affected by the deal, if they saw it as an indication that Chauvin’s actions were inappropriate. Chauvin’s lawyer and a spokesman for the state attorney general’s office, which is prosecuting the case, did not respond to requests for comment. A spokeswoman for Minneapolis said the settlement was “independent and separate from the criminal trial underway.”

The large payment was a sign of the magnitude of the response to Floyd’s death, which led to protests in hundreds of cities, changes in local and state laws and a reckoning over racism and police abuse. In Minneapolis, a police station and many businesses were burned over several nights of unrest.

At a news conference, Crump said the agreement would “allow healing to begin” in the city. He said the family had pledged to donate $500,000 to “lift up” the neighborhood around 38th Street and Chicago Avenue, the corner where the police confronted Floyd on May 25. The officers had arrived after a store clerk called 911 and said that Floyd had tried to pay with a fake $20 bill.

Frey said on Twitter that the agreement “reflects a shared commitment to advancing racial justice and a sustained push for progress.”

Some community members, however, were skeptical of his assertion.

“We haven’t even taken a step, let alone a mile, toward fundamentally changing this police force,” said D.A. Bullock, a filmmaker who lives in Minneapolis. “We’re just waiting for the next George Floyd to happen.”

Bullock said he imagined that Floyd’s family would return every penny if they could have him back.

“All I want to talk about is how we’re not going to have police out here killing Black folks,” he said. “That’s really my bottom line, regardless of the size of the settlement.”

Two years ago, Minneapolis agreed to pay $20 million to the family of Justine Ruszczyk, a white yoga instructor who was fatally shot by Mohamed Noor, a police officer who is Somali. Excluding that case, the agreement with the Floyd family is larger than the city’s combined settlements related to police misconduct from 2006 to 2020, according to city data.

Minneapolis pays its settlements out of a fund for legal payouts and workers’ compensation claims, and residents have expressed concern that their taxes are subsidizing payments for the misconduct of the police while failing to hold officers accountable. Activists have pushed for legislation that would require officers to carry their own liability insurance, with premiums that could rise after cases of misconduct.

Mark Ruff, the city coordinator, said during a news conference that with cash reserves, officials were confident that the Floyd agreement would not lead to an increase in property taxes.

The settlement reflected the rise in payments over police abuse and misconduct in recent years. In September, Louisville, Kentucky, agreed to pay $12 million to the family of Breonna Taylor, the Black woman whom officers shot and killed in her apartment a year ago.

Five years earlier, the family of Freddie Gray reached a $6.4 million settlement with Baltimore after he was fatally injured in police custody. Also in 2015, New York agreed to pay $5.9 million to the family of Eric Garner, who died after a police officer used a chokehold on him.

In some ways, the escalating amounts are indicative of growing public support for holding the police accountable, said Katherine Macfarlane, an associate professor of law at the University of Idaho who specializes in civil rights litigation. But it is also an issue of precedent, she said.

“I think that once you have an incrementally larger settlement, it becomes, in some way, precedent to ask for at least that,” she said. “It gives an attorney a way to say, ‘This is what’s been done before on similar facts, but this is even worse, so we should go above that.’”

Floyd’s family had sued Minneapolis in July, saying that the police had violated his rights and failed to properly train its officers or fire those who violated department policies.

Crump said on Friday that the settlement was the largest ever reached before trial in a civil rights wrongful death lawsuit involving the police. That it came in a lawsuit over the death of a Black man, he said, “sends a powerful message that Black lives do matter and police brutality against people of color must end.”