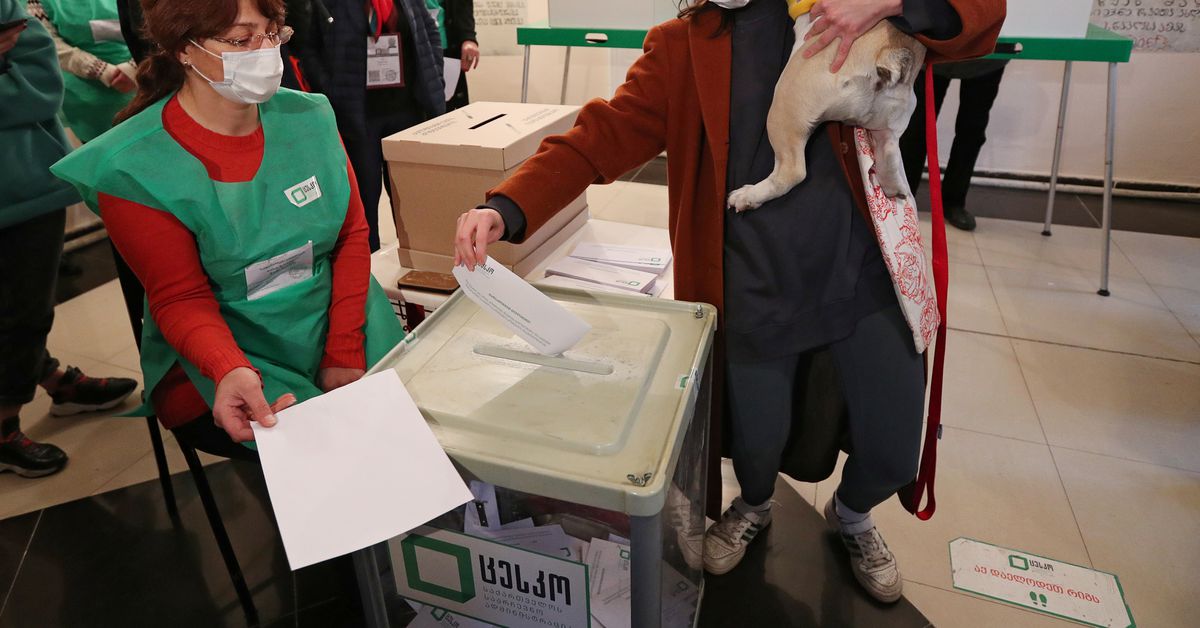 A woman holds her dog as she casts a ballot at a polling station during the second round of the municipal elections in Tbilisi, Georgia October 30, 2021. REUTERS/Irakli Gedenidze

MOSCOW, Oct 31 (Reuters) – Georgia’s ruling party, Georgian Dream, won 19 of 20 mayoral elections including in the capital Tbilisi, electoral authorities said on Sunday, as the opposition alleged that ballots had been rigged.

Denouncing the vote, the head of the United National Movement (UNM) opposition party, Nika Melia, called on supporters to gather in Tbilisi on Sunday to agree a response.

“No one should have the illusion that they can get away with rigged, violent and insulting elections,” Melia, who ran for office in the capital, was quoted as saying by the RIA news agency.

Around 2,000 to 3,000 protesters rallied in the centre of Tbilisi later on Sunday and Melia announced plans to stage a larger protest on Nov. 7, Russian new agencies reported.

There was no immediate response to Melia’s allegations from Georgian Dream, but the ruling party rejected claims of foul play at the previous local election held on Oct. 2.

Election Commission chief Kalandarishvili said several incidents at polling stations, the nature of which he did not specify, had not had an impact on the results, Interfax said.

His commission would review complaints over the voting process in coming days, he added.

The only race won by UNM was in Tsalenjikha, a small town in western Georgia, Russian news agencies cited the Election Commission as saying.

The first round of mayoral elections was held on Oct. 2 during a set of nationwide local elections that Georgian Dream also won.

Georgia, a country of around 3.9 million, has faced a political standoff since a disputed election last year, which prompted the UNM to boycott the parliament for months. read more

The party was founded by former president Mikheil Saakashvili, who was arrested in October after he flew in from exile. He declared a hunger strike on Oct. 1 that his allies have urged him to call off, fearing for his health. read more