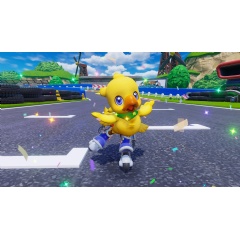 We’ve just announced a kweh-zy new racing game, based on the beloved Chocobo series. Filled with iconic FINAL FANTASY locations, it’s going to be one heck of a ride.

This exhilarating kart racing game lets you take to the road in iconic loca tions from across the Chocobo and FINAL FANTASY series.

So what exactly gets Chocobo and pals to participate in this automotive extravaganza? The answer’s revealed by the game’s story mode, which sees the gang enter a racing tournament to win a truly unbelievable reward: a wish for whatever their heart desires.

As incentives go, that’s pretty good – and the racers are out to win! Magic Eggs containing magicite are scattered across the courses – collect one of these and you’ll be imbued with magic, such as Fire or Aero, which you can use against your competitors to disrupt their race. Of course, they can do the same to you…

Fortunately, each character from the roster has access to a special ability, which can be activated under certain conditions during the race – that’ll add some drama when your rivals least expect it!

As for the courses themselves, you’ll zip through bright and vibrant scenery that takes inspiration from throughout the Chocobo and FINAL FANTASY series. We don’t want to reveal everything here, but you’ll race through Cid’s Test Track, the streets of Alexandria, Zozo and the Gold Saucer.

There are lots of different game modes included too, with select modes supporting online and local play. For example, in addition to the story mode, you’ll also be able to set up custom races, do your best to make it through survival races in a bracket-style tournament and more.

Chocobo GP is on track (heh) to launch for Nintendo Switch in 2022. We’ll have more to share in the future, so to stay up to date with news about the game, make sure you follow FINAL FANTASY on social media: