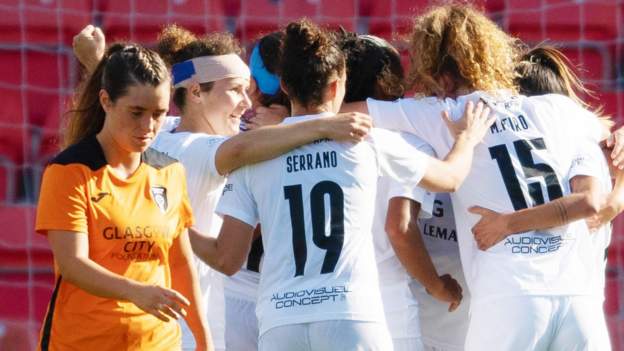 Glasgow City’s hopes of playing among Europe’s elite this season are over after Swiss champions Servette came from behind to win their Women’s Champions League second round tie.

But Jade Boho Sayo smashed home after an indirect free kick, and Sandy Maendly gave the visitors the lead.

Despite late pressure, City could not find an equaliser to force extra time.

It means Servette will be in Monday’s group-stage draw alongside the likes of Barcelona, Bayern Munich, and Chelsea, while City must now turn their focus to defending their SWPL 1 title.

Grant Scott’s side got off to a strong start when Niamh Farrelly flicked on Lee Alexander’s punt forward, and Chinchilla raced through to finish neatly and give them the lead in the tie after 14 minutes.

However, shortly after the hosts were lucky to keep 11 players on the pitch as Claire Shine – City’s goalscorer in the first leg in Switzerland – put her boot into the face of Thais Hurni as she stretched for the ball. Shine, though, escaped with a yellow card.

Undeterred by that, the Swiss champions continued to pose a threat, especially from set pieces, and Alexander was forced to make two good saves before being punished for picking up a knockdown from a team-mate in the box.

Boyo Sayo took full advantage by smashing the ball into the top corner from seven yards after a quick lay-off from the indirect free kick.

City were then punished for a slow start to the second half as they gifted possession in their own final third, and allowed a cross to the back post, where Boyo Sayo was waiting.

Alexander initially produced a terrific save to tip the midfielder’s close-range shot onto the bar, but Maendly was waiting to nod the ball over the line from one yard out.

From there, City upped the tempo, but lacked creativity in the penalty area as Servette defended bravely, with Megan Foley’s long-range effort off the bar as close as the home side came.

Instead, the visitors ought to have killed the tie with 17 minutes remaining, but Elodie Nakkach inexplicably tapped wide from six yards out after a swift counter-attack.

“They are a very strong side, technically good, physical and fast, but we knew all that and were well prepared. On the day we were a bit loose and got punished.”