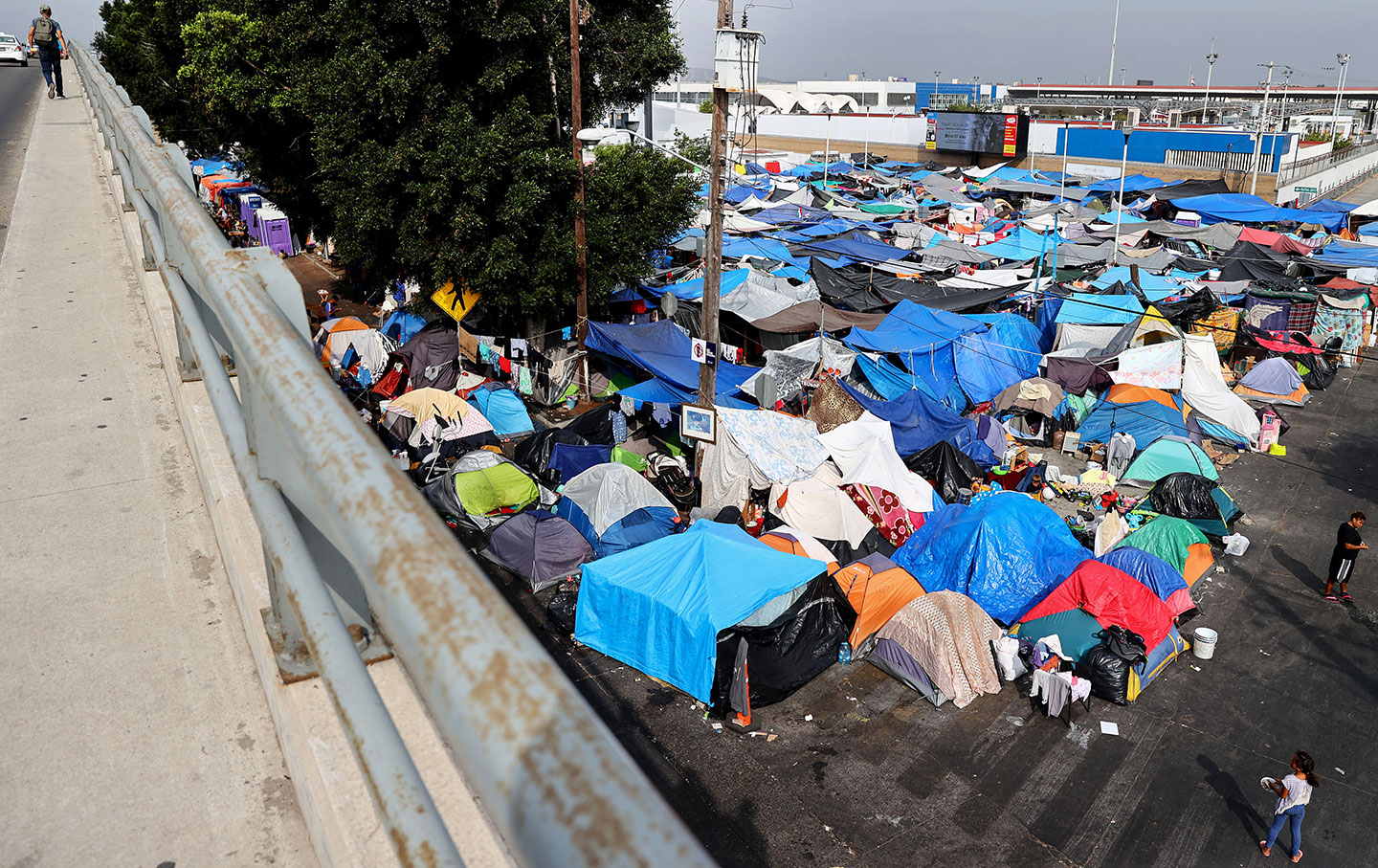 Despite the fact that the coronavirus is still rapidly spreading across the United States, a semblance of pre-pandemic life has returned. Similar scenes of everyday life can also be seen across Europe, which has caught up to the US in terms of vaccinations and has done a better job of controlling the spread of the virus. What has not returned to its (already abysmal) normal, but instead has gotten worse, are the draconian restrictions nations are imposing on migrants and refugees across the world, using the pandemic as a pretext to keep them out of new homes where they might find safety. As the West debates the merits of using vaccine passports domestically, we are overlooking the ways in which the pandemic and global vaccine inequity are further restricting the movement of migrants and asylum seekers globally.

Restrictions on migration are not new—migrants from Central America, Haiti, and countries as far as India have sought asylum at the southern US border in the past few years, driven by climate change, gang violence, political instability, among other reasons. The Trump administration responded to this with cruel and inhumane policies, from separating children at the border from their parents (some of whom continue to be separated to this day) to implementing the “Remain in Mexico” policy in 2019, which required asylum seekers to stay in Mexico until they had their court date. Recently, the Supreme Court reinstituted that policy after the Biden administration tried to end it. Migrants have also been traveling to Europe, often by sea, since 2015, many of them fleeing conflict in Syria, Libya, Somalia, Afghanistan and other nations. Like in the United States, this has become politically contentious—with far right leaders like Viktor Orban “building a wall” across Hungary and some social democratic leaders like those in Denmark, seeking to revoke residence permits for Syrian refugees.

But the pandemic has spurred the United States and European nations to become even stricter about admitting asylum-seekers. Here in the US, the Biden administration has maintained the policy, first imposed by Trump, to use Title 42 of the Public Health Service Act to expel asylum seekers at the southern border. This order applies to those arriving at formal points of entry and those who are intercepted crossing irregularly. Title 42 allows the surgeon general of the United States to “prohibit the introduction of persons and property” under the pretenses of keeping out contagious diseases. During the pandemic, Title 42 is being applied exclusively to adults and families seeking asylum at the Southern border and not to others seeking to enter the United States (though others may be subject to other, less harsh, restrictions). As of the beginning of August, the United States has expelled close to 1 million people since March 2020. A report by the nonprofit Human Rights First has documented how these expulsions of migrants have led to rapes, kidnappings, and assaults. The Biden administration has also used controversial expulsion flights to pack migrants into planes and fly them all the way down to southern Mexico, putting migrants at risk and spreading the virus to other nations.

This, of course, is not just happening in the United States. In Europe, the pandemic has been used as pretext to further an illegal and dangerous practice known as “pushbacks.” While the amount of immigrants arriving in Europe by land and sea in 2020 was the lowest it has been in recent years (95,000 compared to 170,000 in 2017) the UN High Commission for Refugees reports that European countries have increased pushback activity during this pandemic. Unlike Title 42, pushbacks aren’t necessarily a formal policy, but they have the same effect—they force migrants back over the border in which they came from—often using violence. Sometimes these practices occur at sea—which involves either ignoring the distress calls of migrants at sea, obstructing efforts to rescue them or returning them to Libya, which has been accused of running open air slave markets. The German newspaper Der Spiegel has revealed that Frontex, the European border agency, conspired with the Libyan Coast Guard to return migrants to torture camps in the country. Ultimately, in 2020, the EU pushed back 40,000 migrants—leading to at least the deaths of 2,000 according to an analysis by The Guardian. All of these actions spread the pandemic by putting people in vulnerable positions, but just beyond the borders of western nations. All of this violates Article 14 of the Universal Declaration of Human Rights, which states that people have the right to seek and enjoy asylum free from persecution.

Asylum-seekers are not the only migrants who are facing additional obstacles due to Covid-19. Currently, the United States requires all green card applicants to be vaccinated for COVID-19. (There are exceptions for those who are in a country where an approved vaccine is not available.) Some European countries require a vaccine to travel to the country, while others only require it to waive the quarantine requirement. In isolation, these requirements are not troubling—after all, vaccines for many diseases are already required before someone immigrates to the United States and vaccine requirements make sense to lower the risk of transmission as someone travels between borders.

But the vaccines have not been distributed equally. While much of the Western world has vaccinated a significant percentage of their adult population, lower income countries have been left out—about 75 percent of available vaccines have gone to just 10 countries. Only about 15.02 million doses out of 5 billion administered have been given in low income countries, even though these nations generally have less vaccine hesitancy than developed countries. Africa, for instance, has only managed to vaccinate about 3 percent of the population on the continent and its vaccine supply is projected to drop.

There is inequality not only in the amount of vaccines but the type of vaccines each country receives. Lower-income countries are more likely to use vaccines made available through the COVAX initiative which includes the Chinese Sinopharm vaccine and vaccines produced by the Serum Institute of India—while upper income countries are more likely to use Pfizer, Moderna, Jansen and AstraZeneca purchased by themselves. Countries like the US, France and other European nations usually only accept some or all of the latter vaccines for proof of vaccination. Added together, people from lower income countries face tremendous barriers in trying to travel right now.

This also raises concern as to how vaccination will be used to push out migrants and refugees in the future. Currently, countries like the United States are using broad-based travel restrictions to keep people out; in addition to imposing Title 42, the US has implemented land border closures to Canada and Mexico for non-citizens and non-essential travelers. Canadian and Mexican travelers, however, can still travel to and from the United States by air. While there is also a travel restriction for European citizens from the EU and British nationals from the UK, travelers from those nations can travel to the US after quarantining in another country for two weeks. These restrictions have caused resistance from European governments in particular, prior to the spread of the Delta variant in the US, eased restrictions on travelers from the United States, before recommending they be reinstated. Eventually, the pandemic may start to wane in Western nations and pressure will continue to grow from travelers to reduce restrictions. When that happens countries like the United States will no longer have the pretext of pandemic restrictions to keep asylum seekers and migrants out. Vaccination proof may be the next barrier.

The United States and other upper income countries have consistently shown that their priority is allowing their residents to socialize and live normal pre-pandemic lives rather than ensuring that the global population has access to vaccines and other tools to respond to the pandemic. The US, for instance, just announced a plan to provide its population with booster shots—a move that has been critiqued by the WHO and has received push back from health experts in the administration. Those booster doses could be used instead to offer crucial first doses to the elderly and healthcare workers across the world. We may see a similar prioritization in who has freedom of movement: travelers from rich nations, with access to unlimited boosters, get to travel between borders freely for leisure, while migrants are kept out under the pretext of lacking vaccination.

The solution here is not to dismiss the necessity of vaccination or to further entrench international borders—the solution is to expand global vaccine access and production. While the United States has backed a plan to waive patents for vaccines, it hasn’t done much to convince other countries (like Germany) to do the same, and so currently, all vaccine production must occur under the direction of the pharmaceutical company that owns the patent—either directly producing it themselves or signing a deal with another pharmaceutical company to produce it for them. Instead of taking these meaningful steps, the US and other Western nations have merely committed to donating vaccine doses. The US can also easily facilitate and control the transmission of the virus amongst asylum seekers by offering them vaccination, testing and comfortable quarantine housing, instead of barring and expelling them. Travel may not be essential, but migration should be.