Gold Price Forecast: XAU/USD bulls commit to the task of the 61.8% golden ratio

The gold price surged on Thursday as the US bond yields fell and the Bank of England warned the United Kingdom’s economy could be headed for a recession later this year with inflation rising as high as 13%. XAU/USD has pushed don within its weekly bullish correction to mark a high of $1,794.23. Gold for December delivery was printing above $1,800 per ounce.

Gold has been benefitting from softer US bond yields, bullish for gold since it offers no yield. The US 10-year note was last seen paying 2.699%, down 0.26% on the day. The US dollar was lower vs. most major currencies on Thursday, down some 0.5% at the time of writing as per the DXY to 105.81. The positive impact of hawkish Federal Reserve comments faded this week while investors waited for more signs on the data front. Friday’s Nonfarm Payrolls and next week’s inflation data will be critical.

The Fed hiked rates by 75 basis points at its meeting in June and July. For now, the money markets are pricing in a 50 basis point hike at the Fed’s September meeting, and a roughly 44% chance of another massive 75 bps increase. Today, Loretta J. Mester, president of the Federal Reserve Bank of Cleveland said on Thursday that the Fed should raise interest rates to above 4% in order to bring inflation back down to target.

“I would pencil in going a bit above four as appropriate,” Mester told reporters following an event held at the Economic Club of Pittsburgh, in reference to the central bank’s policy rate. “It’s not unreasonable I think to maintain that as where we’re getting to and then we’ll see.”

Analysts at TD Securities explained that ”while Fedspeak has pushed back against the market’s dovish interpretation of the FOMC, and yesterday’s data surprised to the upside, seeing rates and pricing of the September hike increase, the gold market is thus far trading with a mind of its own.”

”CTA triggers for additional short covering are coming well within reach. Indeed, we estimate prices closing above $1789/oz would catalyze enough of a shift in momentum to see trend followers target a roughly flat net position,” the analysts added. ”However, with nonfarm payrolls headlining the week tomorrow, our expectations of a stronger-than-anticipated report could quickly put a cap on the prevailing bullishness among gold bugs.”

The monthly US Nonfarm payrolls report will be closely watched on Friday after data early Thursday showed a tick up in jobless claims.

”A strong payroll print should help drive a further rebound in the market’s pricing in terminal rate pricing. This should pressure front-end rates higher, and continue to flatten the 2s10s curve. We remain short Jan 2023 Fed funds futures to position for Fed rate hikes,” the analysts at TD Securities said.

As per the prior analysis, Gold Price Forecast: XAU/USD bulls are back in play, it was explained that the price was running higher in a correction of the weekly M-formation: 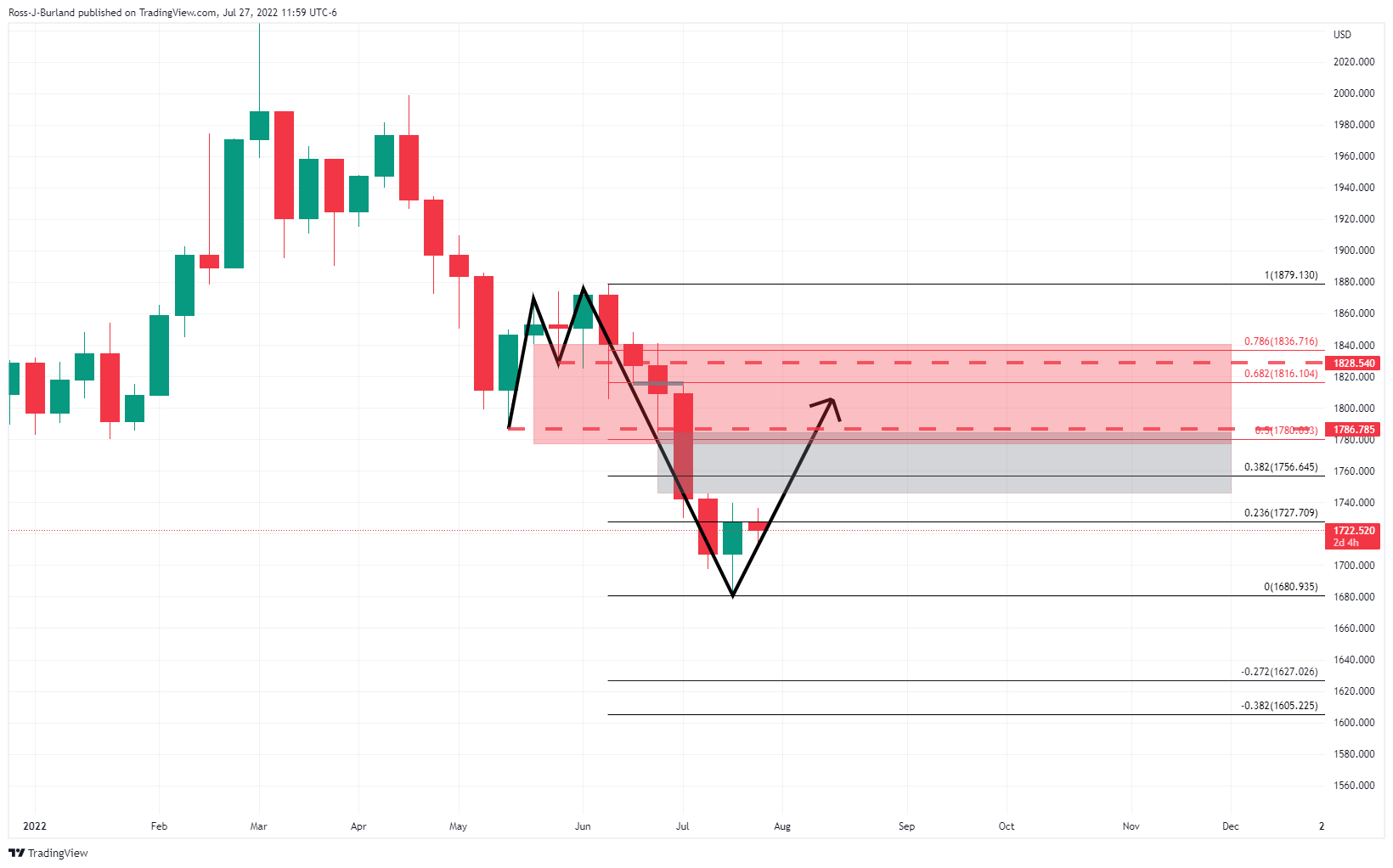 The grey area was a price imbalance that has now been mitigated by a 50% mean reversion: 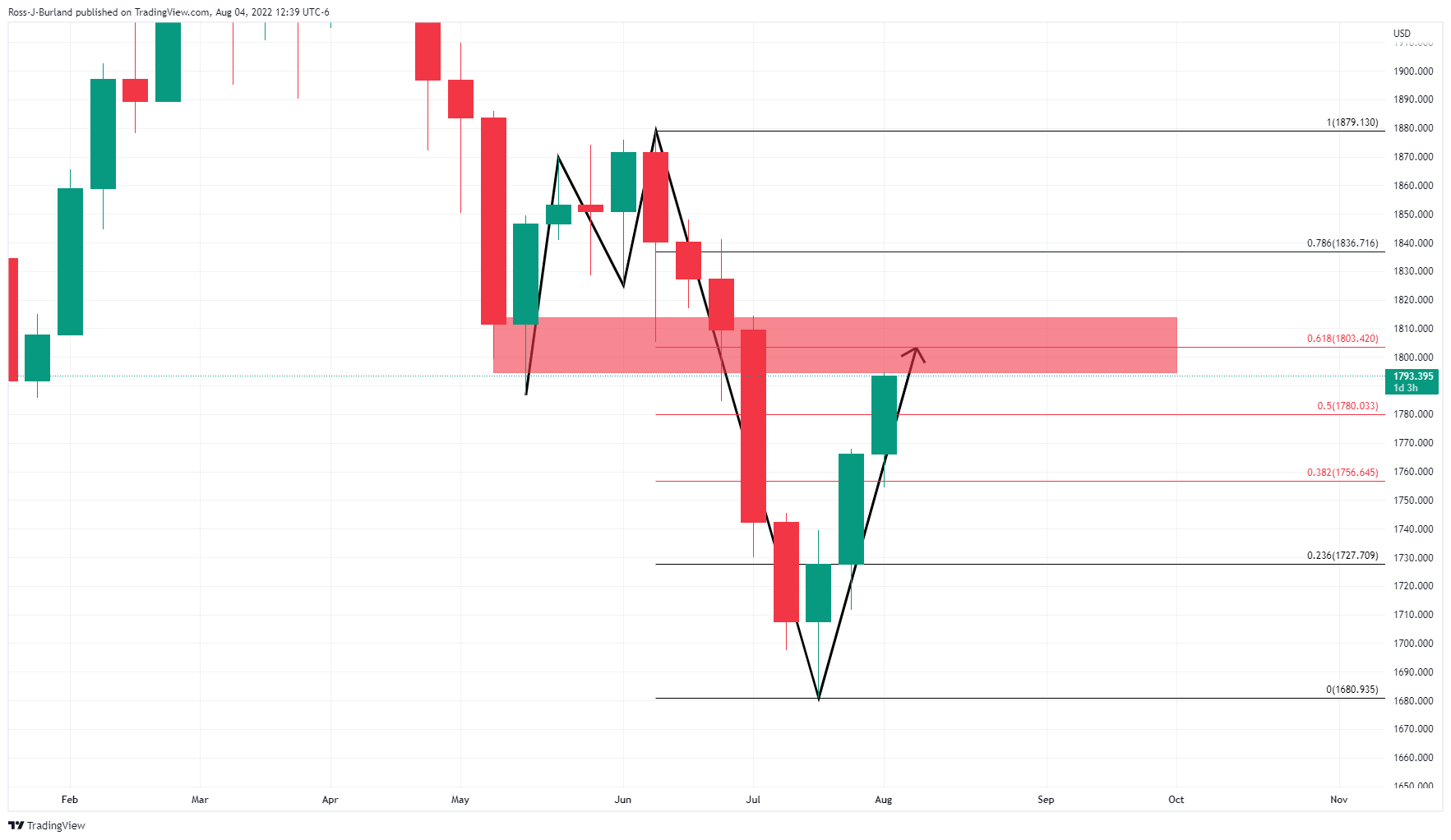 There are prospects for further upside with the 61.8% Fibonacci meeting prior structure around $1,800.

Fed’s Mester: Interest rates should continue to rise this year and through the first half of next year
GBP/USD hovers around 1.2160 post-BoE’s hike in a volatile session