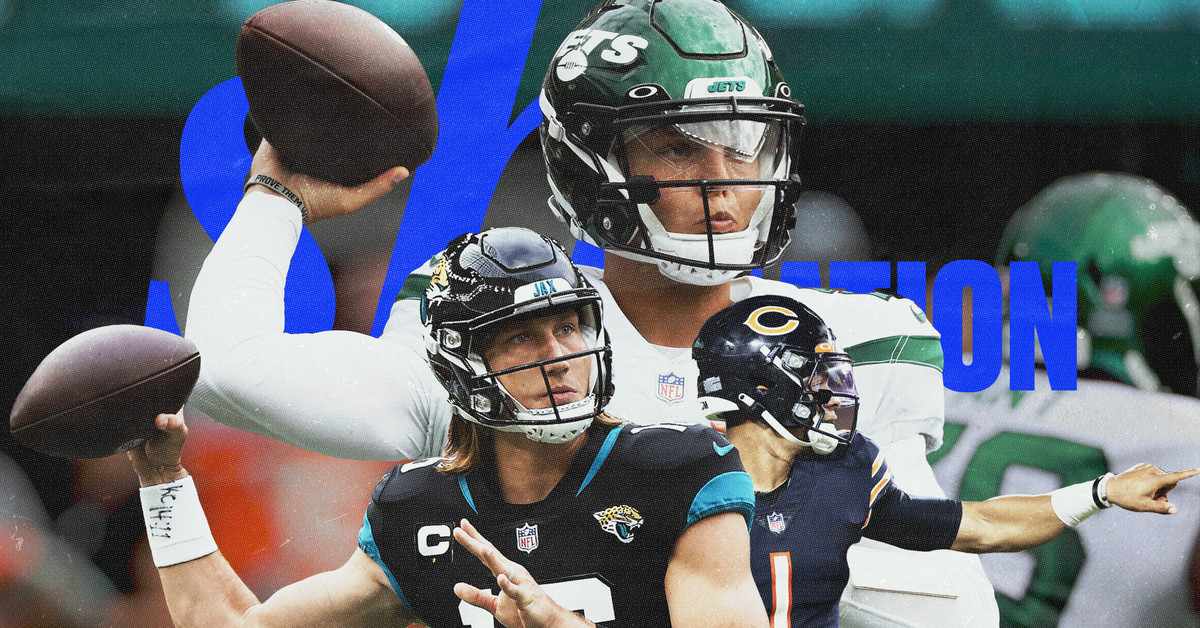 The NFL adage that has stood for decades is that it takes three years to properly evaluate a quarterback. This was steeped in the belief that players making the jump from college to the NFL needed time and grooming to learn a pro offense and adjust to the speed of the game. Now that’s all changed.

It may not be fair to make rash judgements about passers early, but teams are doing it all the time. The NFL is borrowing more and more from college principles, and players are entering the league more polished than ever. This has resulted in a record number of first year quarterbacks starting out of the gate. While struggling early doesn’t mean a quarterback will never be good, in most cases these days we can expect a player to continue on whatever trend they establish in the league — unless major personnel or coaching changes are made.

So now let’s dive into the 2021 class and see how they’ve performed so far.

Facing the most pressure of the rookie class, the expectation out of Lawrence when he was selected No. 1 overall was not just to be the Jaguars’ starting quarterback from the jump, but also change the culture. That wasn’t initially something we thought would be a problem given his history of leadership at Clemson, but thus far Urban Meyer’s disastrous first season has had a horrible effect on Lawrence.

The big thing you’re looking out of a rookie is some sort of sign they can hang in the NFL, and there have been definite flashes from Lawrence this season. A horrific start to the season has given way to three solid starts that saw him finish with a passer rating of 90.0 or above, and things are headed in the right direction. Lawrence has shown flashes of big play ability, and can hang against tough defenses.

The Jaguars have allowed Lawrence to be sacked 10 times this season so far, and while we definitely can’t blame a QB for poor protection, there are times I’d like to see him have more awareness in the pocket.

Another area that Lawrence is struggling in is key passing downs. Whether it’s 3rd down and he needs to make a play, or a shortened field in the red zone, Lawrence has to become more efficient in these areas to take the next step.

The abysmal start to the season has given way to enough recent optimism that there appears to be something to build off. I’m not completely bullish on Lawrence putting it together this season, but overall I think Jacksonville made the right call by selecting him No. 1.

The Jets fell in love with Wilson prior to the draft, and so did a lot of other people. His cannon arm and speedy footwork immediately drew comparisons with Aaron Rodgers, and with that came a lot of pressure for the No. 2 overall pick. New York wasn’t a team poised to support a rookie quarterback starting from the jump, but Wilson was thrust into the limelight early and is taking his lumps.

There’s something to be said for having the fortitude to going out every week, knowing fans will skewer you when you struggle, and keep doing it any way. It seems dumb, but I actually think it’s a credit that he’s not playing gun shy, even if he perhaps should be. Wilson is continuing to push the ball downfield and try to make plays happen, rather than wither into a checkdown passer.

I’ve been nice, so now we need to get into this. Wilson has played atrocious football since Week 1. The vast majority of his passing yards have been in garbage time when the game is far out of reach, and despite being given 181 passing attempts this year, Wilson is only averaging 6.5 yards per attempt — with no appreciable improvement.

Wilson’s worst traits of forcing passes that aren’t there and constantly going for the big play, even when he shouldn’t, have basically destroyed his season and a lot of the confidence fans had in him.

It’s impossible to say this season has been anything but an abject failure. I know the Jets are seriously lacking talent, but Wilson is not doing himself any favors with his play. His recent injury might be the best thing to happen, because it allows the team to pull him back and stop subjecting him to more ridicule until they develop him more.

The 49ers went big in the draft to move up and select Trey Lance. When San Francisco pulled the trigger everyone knew Lawrence and Wilson would go one and two, giving the team the pick of the remaining top passers. Used sparingly in a few offensive packages, Lance has shown enough that there are calls for him to start.

Lance has more of less made the most of the limited opportunities given him, and also shown an ability to be a difference maker on the ground.

The obvious is his poor completion percentage and not seeing the field as well as he should, but outside of this there’s not a lot to really dislike with how Lance has played in limited time.

It’s too early to give Lance a grade, but should he get the opportunity to start some games we’ll get a better sense of what he looks like in a rhythm, or with a full week to prepare.

Widely regarded as one of the smartest picks in the draft, Chicago managed to get Justin Fields far below where many expected he would be taken. This was a godsend for Bears fans. Taking over for a struggling Andy Dalton, Fields has not faired better with the ball in his hands as Chicago now find themselves at 3-4 and failing to put a campaign together that might take them to the playoffs.

There have been some flashes, but that’s really all we can say.

Chicago seem allergic to letting Fields run the ball, and that hasn’t helped matters — but it’s the lack of big plays that’s concerning. Fields has a cannon for an arm, but simply isn’t pushing the ball downfield effectively. When he does try to make a play his ball placement has been off, and too often he’s misjudged the defense, leading to his six interceptions.

This is how I’m grading both Fields and Wilson for very similar reasons. Neither quarterback appears ready to play right now, and we’re not seeing solid progression.

The lowest upside of any of the top quarterbacks in the draft, Mac Jones was perfect for New England because he had a very high floor the Patriots could utilize from the jump. An organization used to working around a player’s physical limitations, the rookie has quickly become comfortable in the New England offense and looks like a long-term starter for the franchise.

Jones is playing a style that very much befits a Bill Belichick football team. He’s not making a ton of mistakes and costing his team the game, and has shown an ability to move the chains and keep the team in contention. Hot off the best game of his career, in which Jones threw for 307 yards against the Jets, we could see his development hit a higher gear where he’s given more rope to play.

In order for Jones to move from “very good” to “excellent” he has to start making more plays downfield. To his credit this has improved over the last two weeks, but at some point completing a lot of passes and moving the chains isn’t good enough, and you need to have a quarterback with the ability to routinely gash defenses for 20+ yards when they make a defensive error. Thus far Jones hasn’t shown that aspect to his game.

Without questions Jones has been the best of the rookie quarterbacks so far, which isn’t necessarily a surprise given his skills and football IQ. The issue is always going to be whether he has the arm talent to burn top defenses, and while I think too much is made of his lack of downfield strength, I do think he’s good enough to win a lot of games when the Patriots allow him to attempt more risky passes.

Selected in the third round as a security blanket at a time it simply seemed like Deshaun Watson was unhappy, Mills’ rookie campaign was turned on its head following the serious allegations of sexual assault against the Texans’ franchise quarterback.

It’s led to Mills starting when nobody had him pegged to take a snap this season, and now the 2021 season has become about getting him reps and seeing what kind of potential he has.

When Mills faced the Patriots in Week 5 he not only put up the best game of his season so far, but one of the best passing games in the NFL period. Finishing with 312 yards and 3 touchdowns, Mills was a huge problem for New England and showed serious traits of a franchise QB. He’s cooled down since that time, but there’s still enough to keep working on him and see if the team found a gem.

Mills is checking down way too much. Now sure, he’s been sacked 15 times and this is preferable to just getting hit endlessly — but there’s a very real concern we could see David Carr 2.0, where Mills is so worried about being hit that he settles for short routes. At this point Houston’s season is over, so the team needs to let him try to air it out more and see if he has the potential to lead this football team.

A middling grade is a hell of a lot better than anyone would have expected if they heard Davis Mills would be starting this season. In the middle of the pack, there are some traits that could be something to build off — but I’m far from being on this bandwagon yet.