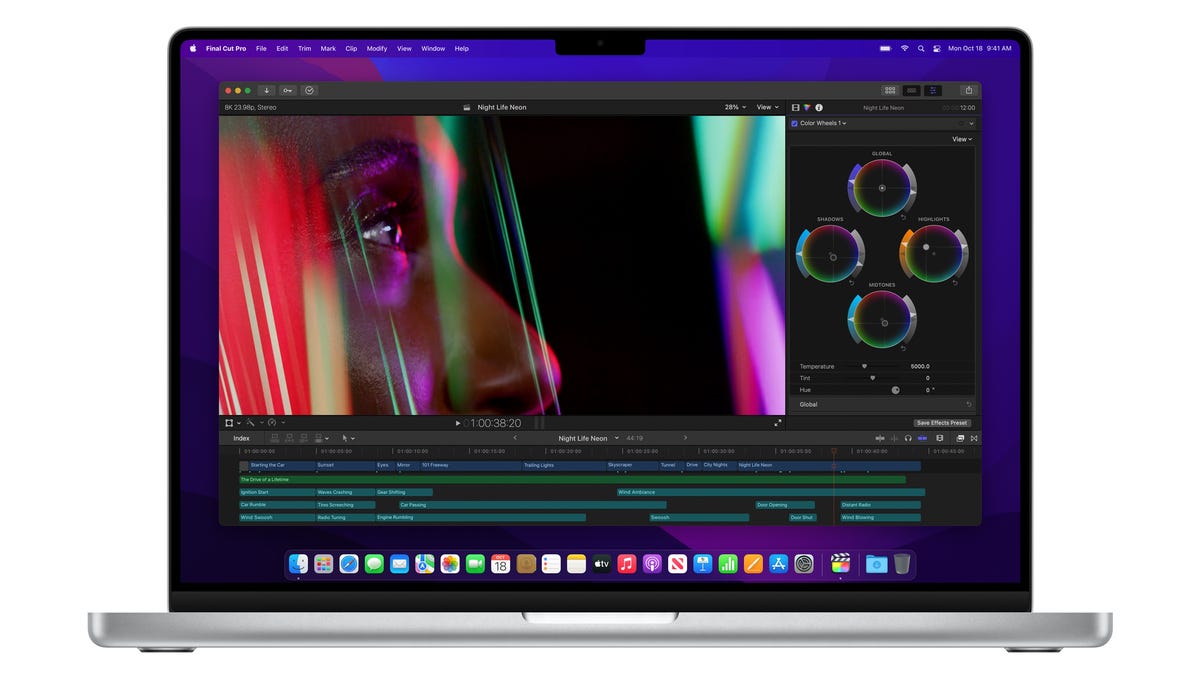 Hit play on the player above to hear the podcast and follow along with the transcript below. This transcript was automatically generated, and then edited for clarity in its current form. There may be some differences between the audio and the text.

And I’m Brett Molina. Welcome back to Talking Tech. Those shiny new Apple MacBook Pro models we talked about just more than a week ago are now becoming available. The new laptops come in two sizes: one with a 14 inch display starting at $1,999, and one with a 16 inch display starting at $2,499. You can get them with one of Apple’s new chips, the M1 Pro and the M1 Max. Apple says the M1 Pro delivers up to 70% faster processing performance than M1, available on last year’s MacBook Pro models. The M1 Pro’s graphic processor is up to two times faster than that of the M1. The M1 Max, up to four times Apple says. And the chips added memory bandwidth that lets more processes happen faster and more efficiently. So, Mike, you got a chance to test drive one of these new MacBooks, right?

That’s right. Brett, I did. Apple lent me a MacBook Pro 14 inch laptop with the M1 Pro chip, with 32 GB of memory, and a 1 TB solid state drive. So, there’s nothing not to like about this machine. I like the way it felt, the new housing. It reminded me a bit of a PowerBook, so it feels pretty sturdy. Not as heavy as that, it’s less than four pounds. The keyboard felt good. It felt sturdy. The edges of the body were not as round, so it felt like you wouldn’t drop it, for instance. The rounded edges always, while they looked good, weren’t always great user-friendly for me because I always felt like I might drop it or something.

But, what we heard in a lot of the feedback and obviously when I tested this helped out a lot too, was that these new computers have more connections than last year’s 13 inch MacBook Pro. And you mentioned that in the coverage of the Apple event also. There’s a slot for SD memory cards, which a lot of photographers need. There’s an HDMI port. There’s that magnetic charger, which just seems to be a user-friendly thing that people like. If you trip on your cord, the magnus comes off and you have a less chance of the computer flying across the table or onto the ground or whatever. There’s three Thunderbolt jacks and a headphone Jack, and Apple says these new computers have better battery life, up to 24 hours of video on a charge on the 16 inch and 17 hours on the 14 inch model.

What I found was this was more computer than someone like myself needed. These are multimedia crunching machines. The new MacBook Pros are targeting creators, people like artists, game developers, photographers, video, and music producers, who need the equivalent of a high-powered desktop or a workstation on the go. And so to show off the muscle that these machines have, Apple loaded the computer they sent me with a bunch of these creativity programs to let me try them out myself. Of course, most of them require skills far above my expertise, but I could toy with them a little bit. So, like when I called up photos and editing software, they look almost like 3D. And when I try to apply an editing function, it happens in a flash. It changes immediately. Same thing with 3D modeling software. I could never have created the artifacts and things that they had in the software, but I knew how to hit a button and change the lighting and things like that. And they just were so, it just was so smooth.

Similarly, I could see multiple 8K video windows running smoothly in video editing software. And game developers could test a video game on up to eight different platforms simultaneously. So they had a game that you could have the iPod Touch running, and several versions of iPhones running it at in time so they could see if there were any glitches.

And then there was this music software program that had more than 1500 separate instrumental tracks within an orchestra performance. Then, the flip side, you could actually just do a stripped down recording with the built-in three microphone array that’s in the MacBook Pro itself. So, all kinds of crazy things that you could do with this machine.

So, it sounds like it handles a lot of those high-end tasks really well, but for the rest of us and for those of us maybe that are just using it for web browser or email and stuff, it almost feels like you’re driving a Ferrari to the grocery store a little bit, right?

It does. And, if you want to do that, that’s great. One thing I would say is if you’re a creator, this obviously makes sense. If you’re just looking to upgrade your computer and you can afford it, this is all almost a way to future-proof yourself for a while. When I put it through my day-to-day tasks, everything worked perfectly. Web pages flow very smoothly. The display kicks into an auto 120 Hz refresh rate, so everything looks smooth as the page goes up and down. It’s like a little miniature home theater if you need a second screen in your house if the kids take over the TV. It has six speakers built in. I watched some music videos and I watched part of the new movie, Dune, and everything looked great, reproduced fine. Played some of the video game, Hades, and it was a gas. Recorded a podcast really easily. It has a new HD camera, so online chatting look good and it actually handles, it’s made to handle lower-light conditions.

My thought is that this is a boon to creators, just as Apple hopes it will be. For people who are non-power users, this might be out of your league, but the model I tested would cost about $2,900. But, if this is part of your business, this probably makes sense for you. You can spend more. You wrote a story that’s on tech.usatoday.com, a fully decked-out 16 inch MacBook Pro can cost you more than $6,000. So, you have to make some thoughts about when you want to purchase something like this, but everything I saw from the machine was that it does what it’s supposed to do.

Oh, well there you go. There you go. Listeners, let’s hear from you. Do you have any comments, questions, or show ideas? Any thoughts on the new MacBook Pros from Apple? You can find me on Twitter @BrettMolina23.

And I’m @MikeSnider. Please don’t forget to subscribe and rate us, or leave a review on Apple Podcasts, Spotify, Stitcher, anywhere you get your podcasts. You’ve been listening to Talking Tech, and we’ll be back tomorrow with another quick hit from the world of tech.