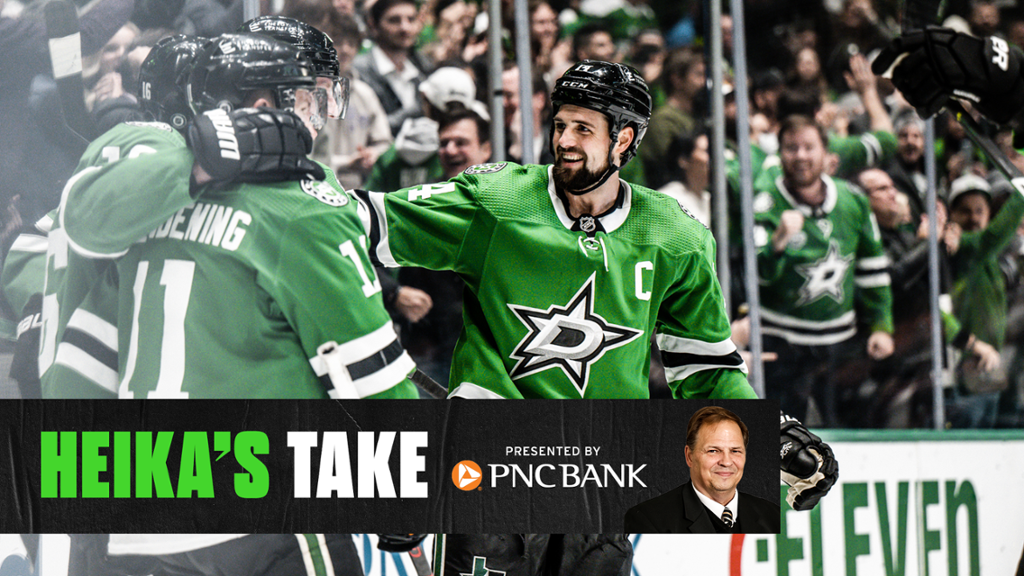 DALLAS — As time wound down Wednesday in a 5-2 Stars win over the Seattle Kraken, Stars players continually tried to feed Joe Pavelski one-timers in hopes the 37-year-old forward would be able to complete a hat trick with his third goal of the game.

Pavelski had already tallied a career-best five points – a moment that was marked by linemate Roope Hintz tracking down that souvenir puck – and his slew of hard shots left the entire arena with a smile on its face.

Video: On the opening goal: ‘It gives everyone a big boost’

Pavelski right now is averaging 1.05 points per game. That’s up from 0.91 last season. That’s right, the man who already has put 1,100 regular season games into his NHL bank might be playing the best hockey of his career.

“It was a fun night, pucks going in the net and we’re getting a lot of chances,” Pavelski said. “You know the fifth one, usually when you have a night where you put a few points on the board it’s your linemates that have been really good, which was a big part of the case here tonight.

“You get a little lucky, win a faceoff and the puck gets someone on the empty netters. Yeah, it was good, but the line was great.”

Video: Pavelski on the win: ‘It was a fun night’

Pavelski on Wednesday helped set up a Jason Robertson shot that was deflected in just 50 seconds into the game. He followed that up 10 minutes later by lurking around the net to pick up a rebound goal. The second period then had Pavelski feeding Hintz who fed Robertson for a power-play goal as well as a beautiful tap-in from Pavelski at the 18:37 mark of the period that was both incredibly valuable and incredibly smart.

After Dallas killed a key penalty while leading by one goal, Pavelski found his way to the crease, and Esa Lindell hit him with a perfect pass for goal No. 15 on the season.

It allowed the team a moment to breathe, as it’s been on a COVID roller coaster. The pandemic and the NHL postponed six games for the Stars, keeping them off the ice for 17 days. Then, after Dallas went 2-1-0 in its return, forward Denis Gurianov and Alexander Radulov, as well as goalie Braden Holtby all tested positive and had to go into the protocol and miss three games.

Wednesday was the first of those three games.

And while the Kraken is an expansion team and falls to 10-21-4 with the loss, this was a serious challenge to a Stars team that’s fighting hard to get back into the playoff picture and was coming off a disheartening loss at St. Louis.

“We kept playing how we played those last games before the break,” Lindell said. “It’s a good feeling around the team. Even though we lost the game in St. Louis, we played pretty well. A win tonight, I think everyone is feeling good. Just have to do the same on the road.”

But can they keep it up? The Stars are 5-1-0 in their past six games, but all five wins are at home. They must play at very tough venues this weekend – Florida and Tampa Bay – so the challenge is real.

What would be the best medicine? Well, to get some scoring from the other lines.

“Today we came out hard, we took the game against them and we went after them,” Lindell said. “I think that’s been a really good thing for our team. That’s something we haven’t had on the road, and that’s something everyone’s spoken about in the locker room, and the coaches have brought it up. We should be able to do the same on the road that we’ve done at home.”

Because Pavelski can tell you getting five points in a game at any age is a pretty difficult thing.

This story was not subject to the approval of the National Hockey League or Dallas Stars Hockey Club.

Mike Heika is a Senior Staff Writer for DallasStars.com and has covered the Stars since 1994. Follow him on Twitter @MikeHeika.