Here’s How Solo Poly Compares to Other Kinds of Polyamory 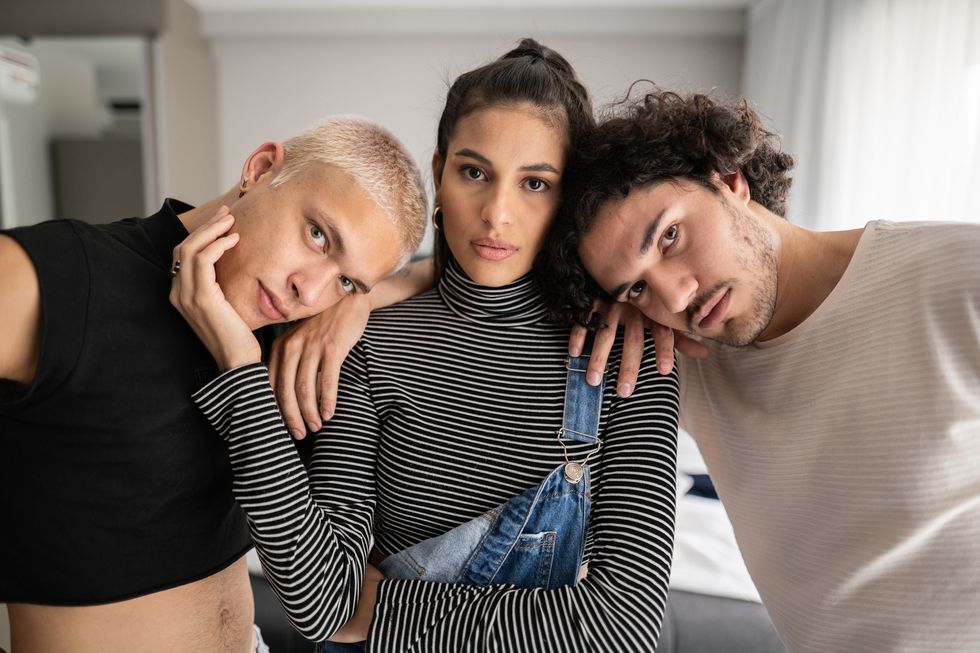 In the past few years, we’ve seen a huge increase in polyamorous visibility. Willow Smith came out as polyamorous. Just last month The Times published a special report titled, “The Rise of Polyamory: Sex Parties, Throuples and Open Relationships.” And a few weeks ago Newsweek published, “My Partner and I Became Polyamorous After 8 Years Together.”

But you can head to any major news outlet that covers sex and relationships, and they likely have multiple articles discussing polyamory.

Being polyamorous means you’re open to the idea of loving multiple people at the same time. (“Open to” is the key phrase here: You can just have one partner, and still be polyamorous. This is commonly referred to as “single poly.”) There are many styles and subsets of polyamory, including solo poly, which we’ll talk about here.

What does solo poly mean?

“Solo poly is a relationship type where a person chooses not to have any primary partners—more specifically, partners that we get on the relationship escalator with,” explains Zhana Vrangalova, PhD., a sex and relationship scientist who teaches an ethical non-monogamy course called Open Smarter. Solo poly people have no desire to “live together with a partner, get married, have kids, join finances, or form a relationship where there’s a lot of dependence and interdependence,” she adds.

People don’t simply fall into being solo poly. “It’s not a matter of circumstance, like single poly, where someone may be looking for a primary partner but does not currently have one,” adds Gabrielle Smith, a writer and non-monogamy educator. It’s also different from “dating around” the way a non-poly person might. When someone is simply “dating around,” they typically have a string of connections until they find the “one,” and proceed to settle down with them. A solo poly person has no desire to settle down with one (or multiple people) anytime soon.

To learn more about the ways people understand and practice solo polyamory, we spoke to four people who proudly identify as a solo polyamorist:

Here’s what they had to say.

How would you define solo poly?

Collin: I define solo polyamory as a relationship first with myself and then with my partners. An understanding that I’m not (currently) interested in engaging in a vast majority of the tiers of the relationship escalator, like moving in together, children, marriage, joint finances, but I am interested in building intimate and authentic relationships with other individuals.

Phoenix: Solo poly is the choice to be single and see multiple people in a way that feels open and ethical. I offer all potential partners the information that I see others, not using a hierarchical system, and not looking for a serious partnered experience that follows linear dating at this time. It doesn’t mean the connections can’t be ongoing, intimate, or deep; it just means things aren’t following the traditional escalator of progression, and all of that is communicated.

Carlos: Solo poly is identifying as single and polyamorous. It exists!

How does it differ from other forms of polyamory?

Carlos: It differs in that it is not tied to coupling but to having an interconnected network. Not that coupling in itself is not wanted or beautiful, it’s just not the route that has presented itself to me at the moment.

Why do you identify as solo poly?

Jack: I identify as solo poly because I was tired of feeling like once a relationship reached a certain step, it needed to absorb all aspects of my life, even if I could continue to date and form new relationships outside of it. I spent a lot of my youth neglecting the “real me.” I was a deeply closeted bi man well into my twenties. Once I broke out of the cycle of committing my whole self to a relationship, compromising to make things work, I was able to evaluate my needs, values, and priorities much more healthfully.

Collin: I identify as solo poly as a means of highlighting both my disinterest in hierarchies and the importance that I place on my relationship with myself as an autonomous individual.

Phoenix: After ending a monogamous long-term relationship, I decided to try different dating styles again. I reflected on previous relationship experiences and behaviors of mine. I realized I wanted to date differently and experience being single in a way that still allows for intimate connections while maintaining a single lifestyle because it’s best for me.

Carlos: It has been such a joy to identify as solo poly, particularly in the age of Covid, because it allows me to create an array of partners individually while maintaining my own space and identity outside of my love life.

“If my loyalty is to a fulfilling, safe, always-evolving, and empowering sex life, what is my partner missing out on?”

What are the perks of solo poly?

Jack: I’ve found solo poly has made the cross-pollination of partners a far lower-stress activity than other forms. Since my partners and I each practice solo, nobody seems to do the kind of scorekeeping or jockeying for the position of “primary” or whatever. Both my partners have become genuinely close friends independent of their relationships with me, and the three of us regularly engage in group sex that is always fun for everybody.

Collin: I think it provides a high degree of freedom, which is very important to me. I need to feel like my own person, one who can come together with others and share myself with them, but who ultimately prioritizes responsibility for and commitment to building and maintaining my own life.

Phoenix: I really enjoy spending my time with different energies. I never expect one person to fulfill all of my needs or I theirs. I enjoy that each person brings something different, and growing alongside others who “get it” is really a rewarding experience. Plus, lots of hot, fun sex is absolutely a possibility. At the end of the day, I have multiple intimate and meaningful connections, but don’t feel tied down.

Carlos: It is liberating to know that polyamory isn’t attached to being in a partnership—that I can be without any partners and still be polyamorous. That I take the lessons from polyamory: to be communicative, to be aware of my own emotions, to be able to create and respect boundaries, and apply them to myself and to the partners that come and go in my life. Additionally, I think it allows my partners to continue their own paths.

What are the cons?

Jack: The biggest con I’ve run into is a limited dating pool. The problem is that poly people can sometimes have an aversion to solo poly folks. It’s also tricky to navigate the amount of alone time if you’re somebody who’s accustomed to a home with other people. I grew up in a big Irish family and then spent years as a stand-up comic, so I’ve only recently been living literally solo. Learning to love the gifts of solitude and silence is tricky if you’re accustomed to chaos, but that was a con that became a huge pro after some adjustment.

Phoenix: Scheduling and remembering to take time to yourself.

Carlos: I think, akin to other types of polyamory, that it is hard to inform those that are not aware that it exists and then the emotional labor to explain it. Additionally, because it creates a moment of separation from partners, if I’m ever feeling too lonely, that dreaded notion of not having that “someONE” adds to my feeling of solitude.

What are any misconceptions about solo poly?

Jack: Misconceptions of solo poly are predicated on a misunderstanding of what makes a relationship matter and what can make for a good relationship. I get a lot of feedback from people that boils down to something of the effect of: “You’re afraid of commitment.” I think romantic commitment, or its low rent cousin, “loyalty over everything,” is misleading as a virtue. If my commitment is to my health, self-care, stability, and wellbeing, how does that detract from my relationship with a partner? If my loyalty is to a fulfilling, safe, always-evolving, and empowering sex life, what is my partner missing out on?

Collin: For me, solo poly feels like the most natural expression of polyamory. I think a better question is misconceptions about polyamory. I often feel (and perhaps mistakenly) that the default understanding of polyamory is the idea that polyamorous people are just folks who are interested in having an open relationship with their primary partner. To me, this feels like monogamy-lite, which may or may not be a fair thing to say. It seems that everyone being on equal footing and prioritizing first being in harmony with themselves would be the default, while introducing hierarchy and inevitable escalation (both completely valid concepts) would be the deviation.

Phoenix: I think some people assume it means I’m not at all open to different types of commitment or that I need to be fucking an entire basketball team worth of people at all times. It isn’t about being a selfish hedonist, so much as it is me saying, “This is where I am at right now.”

Zachary Zane
Zachary Zane is a Brooklyn-based writer, speaker, and activist whose work focuses on lifestyle, sexuality, culture, and entertainment.