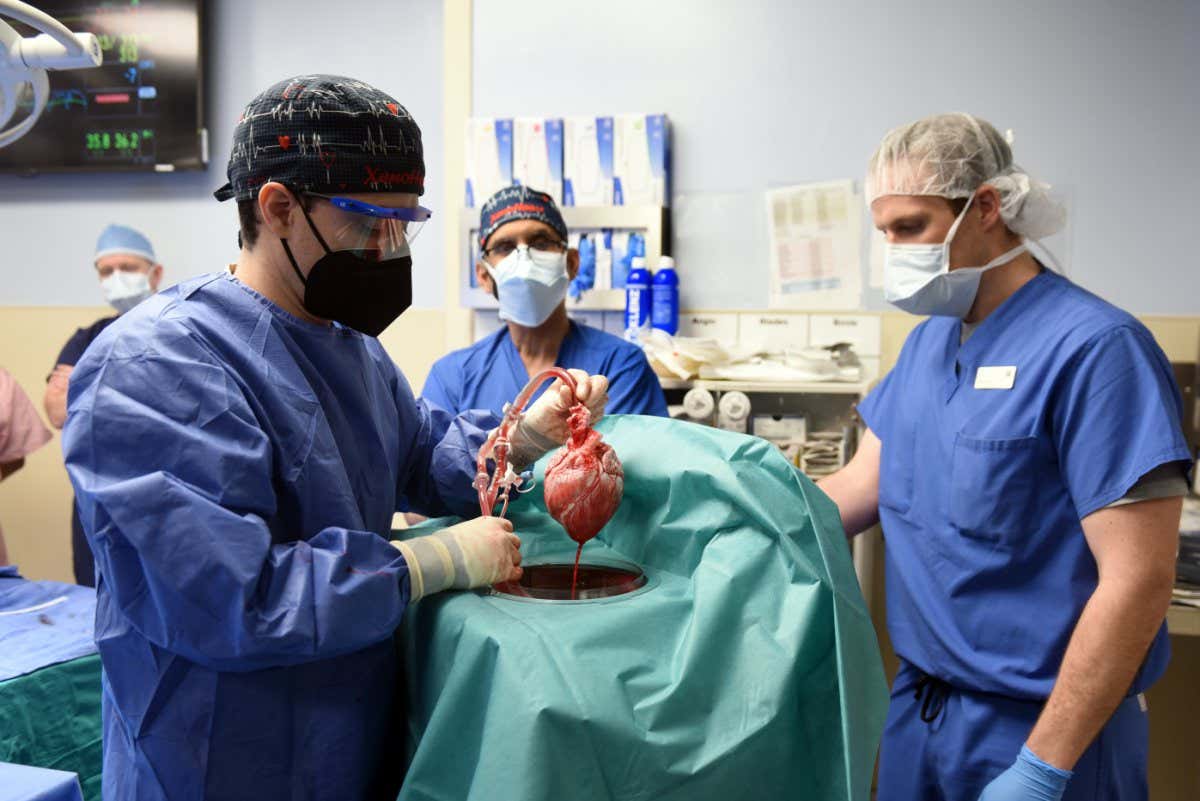 FOR the first time, a human has been given a transplant of a pig’s heart. David Bennett, 57, had the operation in Baltimore, Maryland, on 7 January using a heart that had been genetically modified to boost the chances of acceptance in a human body.

The donated heart came from a pig developed by US firm Revivicor. In total, the animal had 10 genes modified. Four of those were inactivated, including one that causes an aggressive immune response and one that would otherwise cause the pig’s heart to continue growing after transplant into a human body.

To further increase the chances of acceptance, the donor pig had six human genes inserted into its genome and Bennett is taking immune-suppressing medications. As this story went to press, Bennett was coping well with the new heart, but hadn’t yet been taken off a heart-lung bypass machine supporting its function. His medical team told The New York Times that the animal heart was doing most of the work and that, so far, the heart “looks normal”.

“This is a great step forward – you can compare it with the first landing on the moon,” says Joachim Denner at the Free University of Berlin.

Transplants from other animals, known as xenotransplantation, have long been seen as a way to save the lives of the thousands of people who die each year while waiting for an organ transplant. The chief concern is whether our immune systems will accept such transplants, as organ rejection can happen even between carefully immunologically matched human donors and recipients.

Many research groups have been trying for years to modify animals so their organs provoke less of an immune reaction, and have had success transplanting them into primates such as baboons.
These first days are a critical test, although immune rejection could take weeks or longer to develop, says Denner, who has been involved in primate research using Revivicor’s pig organs, but has no financial connection to the firm. “We have to be cautious. We have to wait and see,” he says.

Bennett was approved to have the risky procedure as he was too sick to go on the waiting list to get a human heart. If he is successfully taken off the bypass machine and continues to stay well, it could open the door to such transplants for a growing pool of other people. It could also lead to pig-to-human transplants of kidneys, livers and lungs in future.

There have been fears that virus genes naturally found in pig DNA could cross to humans, but these have faded after successful transplants of pig pancreas cells into people with diabetes. No such problems have arisen with transplants of whole pig organs into primates either. Still, it is likely that Bennett’s doctors are closely monitoring him to check for this possibility, says Anthony Warrens at Queen Mary University of London, who was not involved in the work.

“This is a very early experiment and will not translate into clinical practice within a short period of time,” he says. “If it works, it could be a small number of years away.”

If this procedure succeeds, providing the organs to offer it more widely in future shouldn’t be a major obstacle. Pigs have about eight piglets in each litter and can start breeding before they are a year old, although they would need to be farmed in special hygienic conditions.

A spokesperson for NHS Blood and Transplant in the UK said in a statement: “We have been watching this particular field of research for many years. However, there is still some way to go before transplants of this kind become an everyday reality.”