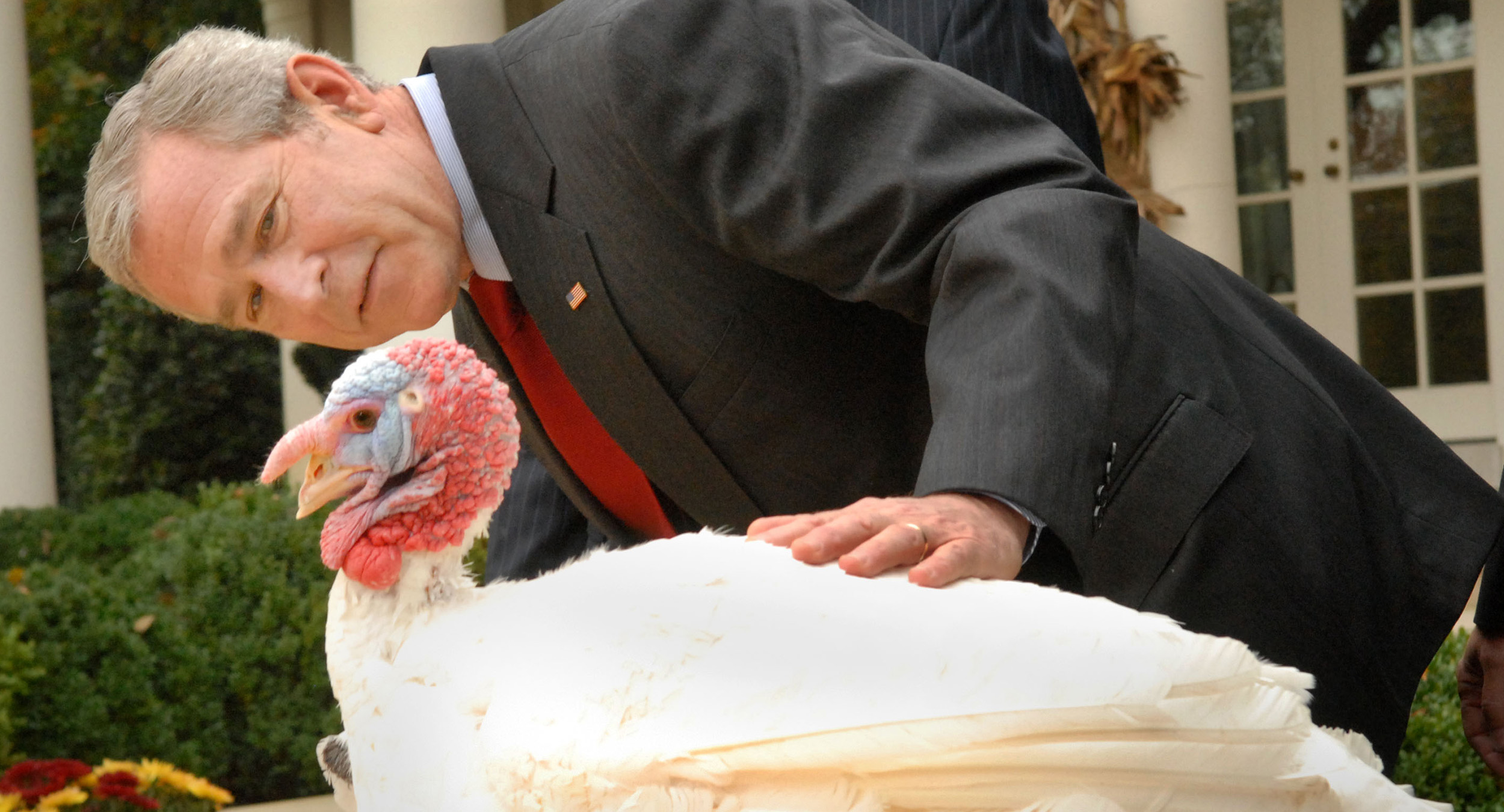 President Joe Biden on Monday fulfilled one of the presidency’s most solemn and sacred duties: saving an innocent life from certain death. Just kidding: Biden “pardoned” a pair of turkeys named Chocolate and Chip on the White House lawn in one of the goofiest traditions in American politics.

The annual “Pardoning of the National Turkey” is a rare lighthearted moment that presidents routinely get to take part in. It’s one of the the fluffier events on the presidential agenda, the ones that act as unifiers and ways to talk about the nation’s values. And, yes, a chance to toss off as many Thanksgiving-themed puns as possible.

This specific tradition, despite what coverage of it would suggest, only goes back to 1989. But we’ll start much further back than that, because I did a lot more research than I needed to, and so you’re going to sit there and read about it while you wait for the less well-connected turkey in your oven to finish cooking.

Our story begins with President Abraham Lincoln — he’s the one who first got the ball rolling on Thanksgiving being a national holiday, back during the Civil War. In a letter to Lincoln, Sarah Josepha Hale, a New Hampshire writer and editor who had been making the case for America to have more holidays, pressed him “to have the day of our annual Thanksgiving made a National and fixed Union Festival.” Lincoln agreed, declaring the final Thursday of November 1863 as a day of thanksgiving.

Woven into that story is the first unofficial presidential pardoning of a turkey. Thomas “Tad” Lincoln grew attached to a turkey that the first family had received to become their Christmas dinner that same year, naming the bird Jack. The 10-year-old was distraught that the turkey was soon to meet the business end of a roasting pan, and, according to one telling, burst into a Cabinet meeting to seek mercy for Jack. Lincoln caved and wrote out a reprieve on a card and gave it to Tad to take to the kitchens. It is unclear what replaced Jack as the main course that year.

We can fast-forward to 1947, when the National Turkey Federation, which still helps put on the pardoning to this day, gave President Harry Truman a turkey for Thanksgiving, the beginning of an annual tradition that sometimes included a photo-op. This bird was likely eaten. So too were the vast majority of the turkeys the federation provided to almost every president for the next 40 years. (John F. Kennedy casually spared the life of the turkey he received in 1963, but with nowhere near the pomp that would come later.)

At some point, it was decided that the birds would be shipped off to a petting zoo instead of eaten. (Richard Nixon seems to have been the first president to do so.) In 1987, Ronald Reagan became the first president to invoke a pardon. In typical fashion, he deflected questions about whether he’d pardon the perpetrators of the Iran-Contra scandal by joking about the turkey, Charlie, that was presented to him that year: “If they’d given me a different answer on Charlie and his future, I would have pardoned him.”

George H.W. Bush, likewise in typical fashion, latched on to that joke and made it literal. “Let me assure you, and this fine tom turkey, that he will not end up on anyone’s dinner table, not this guy,” Bush declared before signing the annual Thanksgiving proclamation. “He’s granted a presidential pardon as of right now — and allow him to live out his days on a children’s farm not far from here.”

If you’re wondering why the pardon became a thing, or why Bush even decided to kick off the tradition, your guess is as good as mine. Bush’s staff had no idea when interviewed about it in 2007. But since then, every president has done so, dropping as many dad jokes into a single event as the speechwriters could squeeze in. Even former President Donald Trump seemed to enjoy the annual ceremonies, making them some of the least weird moments of his term — relatively speaking, of course.

While we’re here, though, let’s talk a little about the presidential power that powers this running gag. I’ve written before about how important the pardoning power is, the role clemency plays in our justice system, and how ripe for abuse it is in the wrong hands. And there remains a massive backlog in pardon and clemency requests: As of May, the Justice Department was sorting through more than 17,000 applications that built up over the last two decades.

It’s definitely fun to see the president standing next to what are always freakishly large turkeys; this year, Chocolate and Chip weighed in at nearly 50 pounds each. But moving forward, let’s see if the White House can mix in some substance with the fluff. The spirit of Thanksgiving and the sparing of life would be better served if, alongside the traditional turkey pardon, the president signed a few pardon and commutation orders of real humans as well.

Hayes Brown is a writer and editor for MSNBC Daily, where he helps frame the news of the day for readers. He was previously at BuzzFeed News and holds a degree in international relations from Michigan State University.