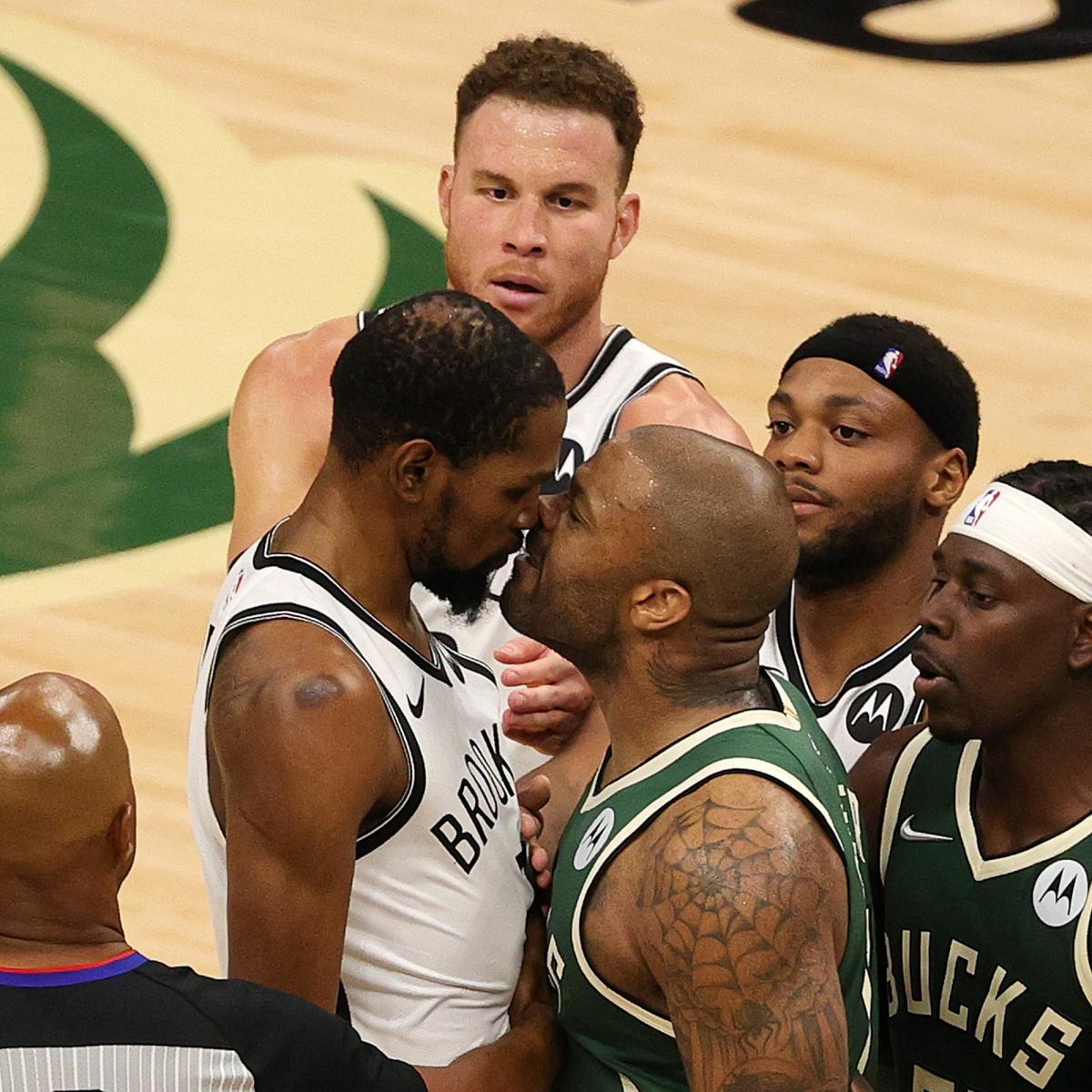 All the Milwaukee Bucks postmortems will have to remain in drafts a bit longer. After being obliterated by 39 points in Game 2, they ground out an 86-83 win on Thursday to pull within one game of the Brooklyn Nets in the Eastern Conference Semifinals.

If they can eventually complete a comeback and win the series after being down 0-2, Brooklyn will surely look back at the last few minutes of Game 3 with plenty of regret.

After falling down 30-11 after the first quarter, the Nets rallied back in the second and held steady in the third. With every Bucks player outside of Giannis Antetokounmpo and Khris Middleton flinging bricks, the fourth quarter seemed primed for a takeover from Kevin Durant or Kyrie Irving.

KD seemingly took on the challenge. When he and P.J. Tucker came nose-to-nose over some contact on a drive, Durant had 17 points on 18 shots.

Kevin Durant and PJ Tucker got right into each other’s faces. https://t.co/wB4IvtAUxv

And in the last three minutes alone, he had seven points on 3-of-4 shooting. That run included a cold-blooded three that put Brooklyn in the driver’s seat—up 83-80 with 1:23 to go—toward a 3-0 lead.

Those proved to be Brooklyn’s last three points of the game, and the play-by-play breakdown of that final minute and a half is a mess.

The team’s second-to-last shot is already drawing comparisons to an iconic moment from The Fresh Prince of Bel-Air.

Y’all used that Carlton meme on me last week. Y’all better break it out again 😂

With fewer than 10 seconds on the clock, Brown came out of a scramble with the ball near the top of the key. There was plenty of time to look for Irving or Durant, but Brown had other ideas.

Even with the massive Brook Lopez right in front of him, Brown seemingly saw nothing but the rim. He attacked, took off from outside the restricted area and hoisted a lefty layup high and to the left of the box. After rocking the backboard, the ball failed to draw iron, and the Bucks were able to put the game away at the line (although Durant probably had Bucks fans holding their collective breath on his final heave).

Some combination of two or three stops and solid offensive possessions over that last 90 seconds would’ve given the Nets a commanding 3-0 lead. Instead, Milwaukee may get to come off life support. And with a hint of confidence and another game at home, a tied series after Game 4 wouldn’t be surprising.

Brooklyn may be able to chalk up some of its issues to off shooting nights from the most important offensive weapons. The chances of KD and Kyrie combining to shoot 20-of-50 again are slim. Another 1-of-11 night from Harris is even less likely.

The Bucks deserve some credit for the defensive intensity, though. Tucker, in particular, was able to bother Durant more than he had in earlier games. KD eventually started knocking shots down, but there weren’t many wide-open looks.

Milwaukee finally played like the bigger team, too. This turned into a 90s-esque battle of the trenches, and the Bucks emerged with advantages in rebounds, blocks and free-throw attempts. Continuing to capitalize on the physical advantages could be the key to winning three more games.

Brooklyn coach Steve Nash may have another card to play there. Maybe he dusts off DeAndre Jordan for a few minutes here and there. If things get really dicey, maybe an expedited timeline for James Harden’s recovery comes into play.

However, while a 2-1 lead with Game 4 on the road certainly feels different than 3-0, talk of drastic adjustments may be a bit premature. After a disastrous first quarter, the Nets were up three with 90 seconds to go. If not for major hiccups on both ends of the floor, this article would feature a different tone.

Playing KD or Blake Griffin as a nominal 5 could cause problems for Milwaukee’s defense. And again, the chances of Brooklyn’s most dangerous scorers repeating Thursday’s shooting performance are low.

A loss is a loss, though. And when the Nets had a chance to bury a talented Bucks squad that hasn’t even gotten Holiday going, it snatched this loss from the jaws of victory.

Suddenly, Milwaukee and this Eastern Conference Semifinal have some life.