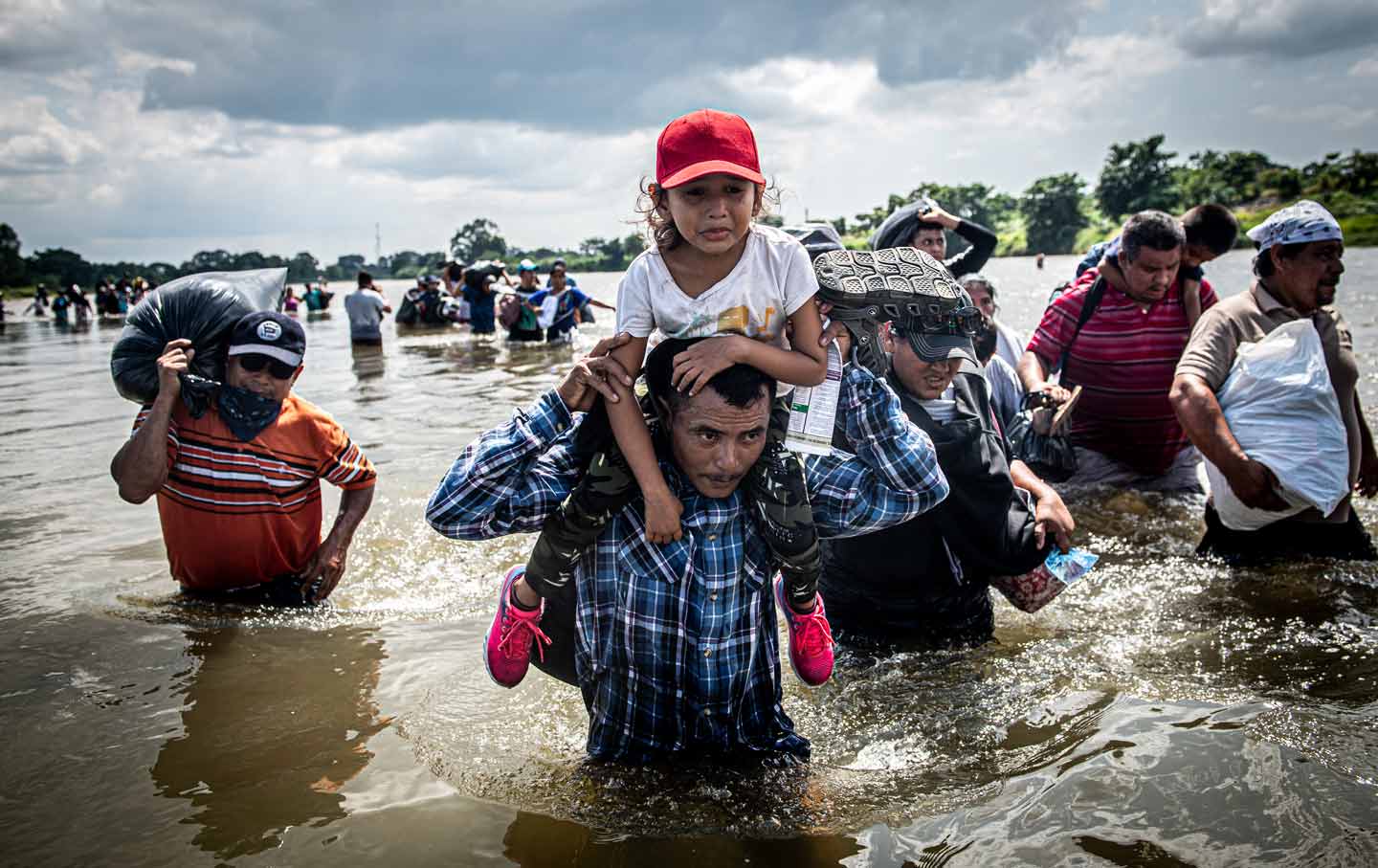 This story is part of a Covering Climate Now reporting series on climate migration called “Flight for Their Lives.” CCNow is a global journalism collaboration strengthening coverage of the climate story.

an edro ula, onduras—Last November, Sara looked at the storm-damaged wreckage of her home near San Pedro Sula in Honduras and considered quitting her job and leaving for the United States. Her boss wanted her back at work and didn’t care that her house was in ruins—or that the businesses she was supposed to shake down had been shuttered. Two Category 4 hurricanes within two weeks had devastated the country. The gang was losing money and her boss started to blame soldiers like Sara. This wasn’t the first time she’d thought about leaving MS-13, but after the hurricanes she made a plan with her husband.

The gang relied on extortion money, a “war tax.” But many businesses across the country closed because of the pandemic, and then the hurricanes took care of the rest. Their boss stopped paying them after the storms. In the following months, as the country’s economy recovered, Sara would be sent on errands to shops where all she’d have to do was drop her boss’s name to get a handful of cash and a hot meal, but none of it was for her. At home, her young child was getting hungry. Nonetheless, she kept working for seven more months—because if she stopped, they’d kill her.

“My husband decided to leave to support our child because there’s nowhere left to get money,” Sara said. “The gang doesn’t allow you to go out and look for a job at the maquilas [factories] or restaurants, nothing. And they’ll kill you if you join another gang.”

The 2020 Atlantic hurricane season had the most named storms on record, and as the world continues to warm, storms like the ones that hit Honduras last year will become more common. Hurricanes Eta and Iota dumped several months’ worth of rain over Honduras in less than two weeks, resulting in more than $10 billion dollars of damage. At least 98 people died and 175,000 more were displaced.

Honduras is getting hotter and drier. The average temperature there has increased by more than 4 degrees Celsius since 1960, and the country is caught in a severe drought cycle. Farmers in some areas have lost up to 80 percent of their crops. The World Bank estimates that Central America and Mexico could produce up to 2 million climate migrants by midcentury.

The drought has pushed many people to leave the countryside to either find work in the cities or take the dangerous migration route north to the United States, which exposes them to both organized crime and state violence. Research from Duke University found that rates of migration were higher following periods of low rainfall, and that those rates went even higher when low rainfall coincided with high murder rates.

“Most of the people in countries that are experiencing climate migration are usually moving internally into cities,” Sarah Bermeo, one of the study’s authors, said. “Many people often ask why don’t Hondurans migrate internally? If I lived in a rural area and lost my crops and all the cities around me were really violent, I wouldn’t want to migrate to those places.”

This episode of Al Jazeera’s Fault Lines, “Exit Honduras: A climate in crisis,” was produced by the author of this piece, Mark Scialla.

Sara joined MS-13 when she was a teen. That was decades ago, but she doesn’t stand much taller than she did then, when the country’s homicide rate started climbing to one of the highest in the world. Chronic poverty and government corruption allowed gang violence to continue and pushed many people to flee the country. The number of Hondurans migrating to the US. has surged in the last 10 years. And as the world heats up, more migration, and potentially more violence, is expected.

Scientists generally agree that climate change won’t cause conflicts, but it can exacerbate existing ones. Countries already mired in violence will be the least able to endure climate shocks, like droughts and hurricanes. Honduras is highly vulnerable to climate change and one of the least ready to adapt, according to the Notre Dame Global Adaptation Initiative, which ranks countries on their climate risk and resilience. The country is already among the poorest in Central America. The pandemic and the drought made the situation much worse, but it was hurricanes Eta and Iota that pushed 3 million people to the brink of a hunger crisis.

“Those countries that are in fragile situations often are most impacted by climate change,” Kayly Ober of Refugees International said. “It is the straw that breaks the camel’s back. Central America has been in drought for years, people are living precariously and then Covid-19 hit and economic opportunities dried up. You are seeing a series of layered effects.”

Becoming displaced and ending up in a new neighborhood can be a death sentence in Honduras when gangs control the streets. New faces aren’t allowed in neighborhoods—whether they belong to the gangs or not.

“They get killed because they can’t just go from one neighborhood to another one unless it belongs to the same gang where they currently live,” Sara explained. “I don’t think it is fair but that’s the law and people know it. I don’t know why they still do it. Many have been killed when they visit their own mother.”

Ingrid Garcia lived in San Pedro Sula with her partner, Jessica. But they lost their house to flooding after a nearby levee overflowed the night that Iota hit. The couple and their two kids moved in with Jessica’s relatives, 15 people sharing a two-bedroom house. Within two months, Jessica caught Covid-19 and died. Ingrid had to move again, and she ended up with her aunt in Choloma, a neighboring city with the third-highest homicide rate in Honduras last year.

An outsider might not notice the gang members around the neighborhood, since signs of affiliation are subtler these days. Instead of face tattoos representing their gang, members might shave a line in an eyebrow or wear a certain pair of shoes that others would recognize as belonging to one faction or another. They are always watching and communicating over message apps when strangers come around.

“They’re always asking, ‘Who is this person? Where is this one from? Where does this one come from?’” Ingrid said. “For me, to go back to Choloma, they have different gangs there, a change that makes you live with fear. If you go out on the street something might happen or you won’t come back, or worse. It has a greater impact on young people. Mostly men.”

Ingrid’s son just turned 16, and she worries about his safety every day. The gangs are known to recruit from around the ages of 8 and upward. The pandemic interrupted her son’s schooling, and like many Hondurans, he’s unemployed. She keeps him in the house as much as she can. But she doesn’t know how long this will keep her and her son safe. Gunfights happen often where she lives, even though there is a police station across the street.

On a clear August morning, Ingrid visited Jessica’s grave, just a few blocks from where she now lives in Choloma. She sat on the cement tomb, brushed away the leaf litter, and started to remember the moments she shared with Jessica. She was only there a few minutes when one of her friends found her and warned her to leave the graveyard. MS-13 runs this neighborhood and it wasn’t safe for Ingrid to be there. Lookouts had alerted the gang’s group chat that strangers were in the graveyard, her friend told her.

With her house gone, her partner dead, and her new reality in a dangerous neighborhood, Ingrid, too, is considering the road north. She just has to collect the money and the nerve to go. “It has crossed my mind, I won’t deny it. Maybe it gives me an opportunity and I can be in another country, elsewhere, to redo my life, to start as people say, from scratch, to see new faces; a different life from the one I led,” Ingrid said.

Sara hasn’t spoken to her husband since he went north in June. Her boss suspects that she knows where he is and took her phone. Now hiding from the gang with her child, Sara is afraid they’ll kill her if they find out where he went. She’s got no money to leave on her own, and unless her husband finds a way to contact her and send money, she’ll be stuck in one of the most violent countries in the world with her old gang hunting her. Meanwhile she waits in hiding, hoping to hear from her husband so that she can be free of the gang and start a new life.

“I’m going with him and with my kid but if they find out, we’ll see what happens,” Sara said. “We are talking about gangs, you have to have courage especially if you have kids.”

*Sara’s name has been changed to protect her identity