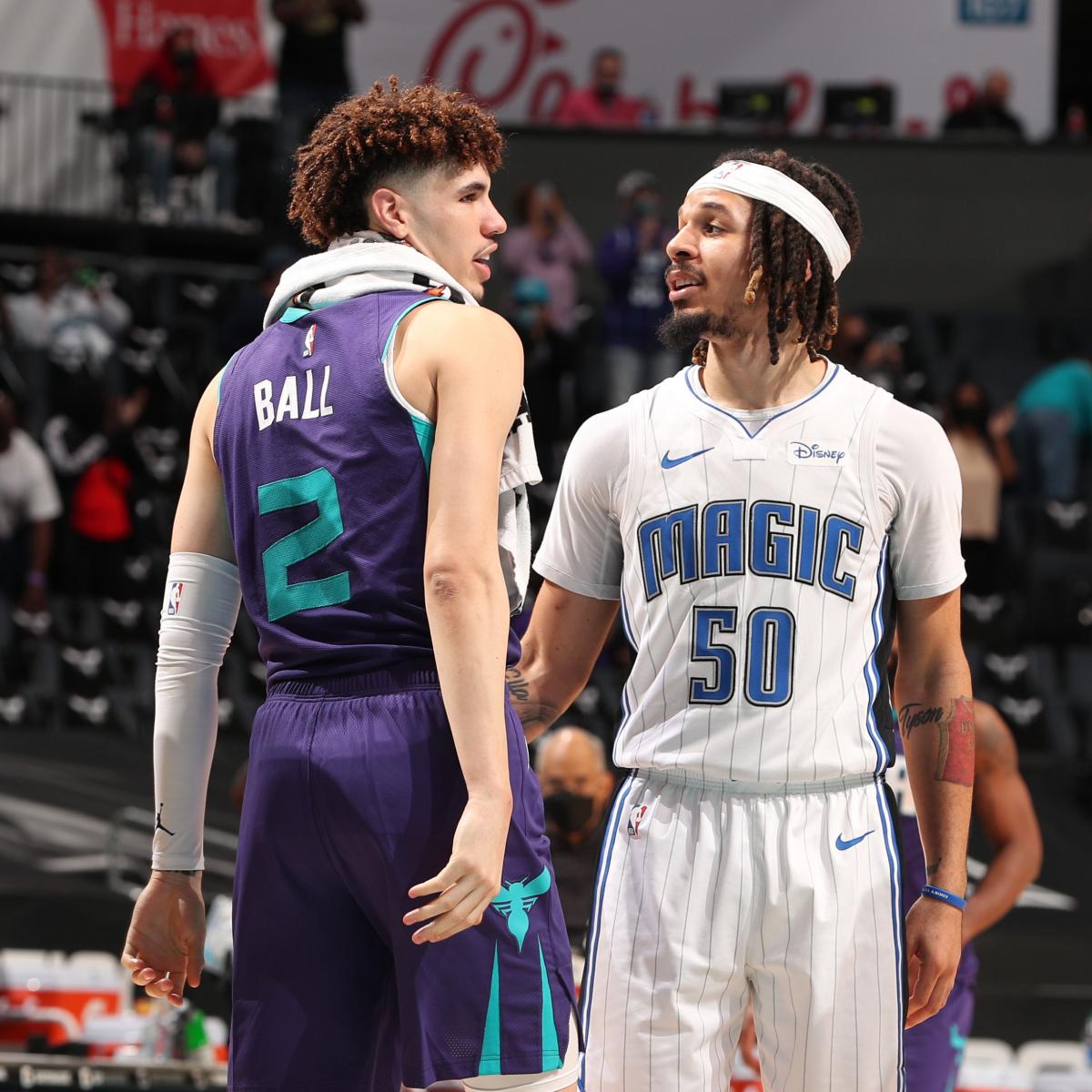 Tyler Herro’s perceived value and upside don’t appear as high now as they were after the Miami Heat’s playoff run in the bubble. Brandon Clarke may have hit a sophomore wall with the Memphis Grizzlies. Cameron Johnson failed to make much of a jump in 2020-21.

Here’s how the top rookies from the 2020 draft class can avoid slumping.

Finishing was a problem for Cole Anthony at North Carolina, and the same struggles led to a 39.7 field-goal percentage as an NBA rookie.

Improving shooting consistency and playmaking are obvious priorities as well. He’ll specifically want to raise his 32.7 percent catch-and-shoot mark with Markelle Fultz back and R.J. Hampton likely to earn minutes. Although, having covered Anthony since midway through high school, I’m not worried about his shot-making development, especially if he avoids another injury. Suffering one each of the past two seasons disrupted his rhythm.

Figuring out finishing in traffic will pose the greater challenge, and continuing to have trouble converting around the key will make it tough to take a notable sophomore leap.

Anthony shot an ugly 43.8 percent inside 10 feet, having made just 30.7 percent of his non-restricted area paint shots—the lowest mark in the NBA in that area (minimum 2.0 attempts per game).

It’s not so much poor touch as it is knowing what angles to take and when to go strong versus use a floater or finesse.

The Magic ranked No. 27 in three-point percentage, so maybe they’ll address that in the draft and free agency to create more spacing for their penetrating guards.

Emphasis for 2021-22: Improve on pick-and-roll execution

LaMelo Ball received 5.7 ball screens per game, a number that figures to go up even if the Charlotte Hornets re-sign Devonte’ Graham and keep Terry Rozier at the trade deadline. Regardless, Ball has to average more than 0.80 points per possession as a pick-and-roll ball-handler.

Generating offense at the same rate (37th percentile) in his supposed bread-and-butter set will make it difficult for Ball to build on his 15.7 points per game and efficiency. He shot just 41.0 percent and turned the ball over 17.3 percent of the time in ball-screen situations.

After making 1.8 threes in 28.8 minutes on a respectable 35.2 percent, it’s unlikely he makes too big of a jump as a shooter. And we know he’ll continue to separate himself with flashy playmaking.

Whether it’s reading the defense better—knowing when to drive, use the floater, pull up and pass—or just execute more finishes and shots on the move, Ball will want to capitalize more often in the pick-and-roll game.

The only way Desmond Bane hits a sophomore wall is if his shot uncharacteristically stops falling. He led all rookies with a 43.2 three-point percentage, the fourth consecutive season (dating back to TCU) he’s finished above 40.0 percent.

Given his track record of accuracy and immediate comfort level behind the NBA’s arc, Bane’s trajectory could carry him into a tier with the league’s most lethal shooters. The Memphis Grizzlies ranked No. 20 in three-point percentage, so they’ll really value the sophomore’s shotmaking as the team tries to advance in the playoffs. The Grizzlies’ coaches should encourage Bane to be even more aggressive moving forward.

Ideally for Memphis, some of the improved creation skills he flashed as a college senior come to life. Bane only averaged 0.7 made pull-ups (36.2 percent) and 1.7 assists last year as a rookie. To take another step forward next season, he’ll want to expand on his one-on-one game and playmaking .

Regardless, his value to the Grizzlies revolves almost entirely around shot making, floor spacing and good decision-making.

Only Damian Lillard and Donovan Mitchell made more threes as rookies than Saddiq Bey—though their rookie years were 82-game seasons compared to 72 this year—and wing shooters will always be valued. However, avoiding a limiting specialist label will require Bey to show more off the dribble next season. He shot 45.0 percent inside the arc and took roughly twice as many triples (460) than twos (231).

While it seems safe to assume Bey should be able to match last season’s 2.5 threes per game on 38.0 percent, the Pistons will be hoping for a more versatile scoring threat in 2021-22. He averaged just 0.6 pull-ups per game and shot 52.9 percent at the basket.

Bey struggled shooting off the dribble in college (29.6 percent), but he was effective getting downhill to the rim as a pick-and-roll ball-handler (88th percentile). Maybe the Pistons give him extra ball screens next season to spark more offensive development.

During the first half of Anthony Edwards’ rookie season, the predraft concerns about his game and awareness were exposed: Poor shot selection, inconsistent shooting, inefficient play. He looked like a stud No. 1 overall pick over the second half of the season, when he limited the hero jumpers, made smarter decisions and put more of an emphasis on using his powerful frame and bounce around the rim.

Since the All-Star break, he reduced his pull-up frequency by 4.8 percent while taking 2.3 more shots per game inside 10 feet.

Edwards has to resist resorting back to heavy hero ball, particularly since he’ll presumably start his sophomore season with extreme confidence.

Dribble jumpers are a huge part of what makes him so dangerous and capable of scoring on anybody. Wisely picking his spots to settle will be key for his own efficiency and the team’s offense. Edwards can’t forget about his 225-pound body and explosiveness.

Emphasis for 2021-22: Continue playing to strengths

The appeal of Tyrese Haliburton comes from the idea that he doesn’t need to consistently pour in 20 points to impact games. He shouldn’t feel a need to outscore his rookie self.

Haliburton should just continue playing to his strengths, picking his spots as a playmaker, open shooter and timely driver who can convert floaters and other finishes.

Efficiency is a huge factor behind his value. He shot 47.2 percent and 40.9 percent from three last year. The Sacramento Kings won’t want him to jeopardize that efficiency for a few extra points per game off more tough shots outside of his comfort zone.

Despite Jaden McDaniels only averaging 6.8 points, the Minnesota Timberwolves know they got a steal.

He just has to continue accepting a new identity. Viewed as a high lottery pick throughout high school and coveted for his three-level scoring skills at 6’9″, McDaniels must now embrace a three-and-D role.

He’ll still have opportunities to create for himself in certain spots. But the Timberwolves need his shooting and defense more, and both translated relatively quickly for McDaniels as an NBA rookie. He shot 36.4 percent from three while delivering flashes of exciting defensive movement.

For the league’s 28th-ranked defense, McDaniels could make himself a must-play power forward next to Karl-Anthony Towns. A lineup missing a true stopper will value his ability to contest shots inside and out, guard wings and make recovery plays.

Tough defense will lead to more minutes. Consistent shooting helps create extra opportunities to attack off the dribble. The offense should come to McDaniels once he earns a full-time role by providing reliable three-and-D.

Emphasis for 2021-22: Be aggressive (build on offensive flashes)

Even if Isaac Okoro takes another step forward toward becoming the stopper that the Cleveland Cavaliers need, expectations are bigger for the No. 5 pick.

He set the bar higher over his final 11 rookie games, when he averaged 15.8 points and erupted for 32 against the Phoenix Suns. He made a case to receive more ball screens and opportunities to play-make, having demonstrated poise off the dribble that allows for good decision-making as a driver and passer.

Still, he finished as one of six NBA players to average over 30 minutes and fewer than 10 points per game. Except for Draymond Green, the other four are role-playing specialists: Royce O’Neale, Dorian Finney-Smith, Robert Covington and Larry Nance Jr.

Given where Okoro was drafted, the Cavaliers’ front office and fans likely envisioned more offensive upside. He did show strong slashing potential with his physical frame and athleticism. And he also made 62 threes, including the occasional step-back.

Another season under 10 points per game will feel like a letdown, regardless of how much promise he shows on defense. Looking to create and find his shot more should be a focus heading into 2021-22.

Immanuel Quickley gave the New York Knicks a surprising source of instant offense this year with 11.4 points in 19.4 minutes (21.2 per 36). But even if he produces more, his sophomore season will be considered a disappointment if he doesn’t improve on his 39.5 field-goal percentage.

Quickley has to make some adjustments to his scoring inside the arc. He showed too much confidence in his floater and not enough in a balanced pull-up game off two feet. He foul-hunted often instead of focusing on separating or simply recognizing a kick-out pass would be smarter.

Quickley attempted 4.3 two-point shots per game, and 3.6 came either in the non-restricted area paint (38.3 percent FG) or mid-range (33.8 percent FG). He’ll have trouble getting all the way to the rim without explosiveness, so he’ll have to improve his shot selection and execution after beating his man off the dribble.

He should keep firing away from deep, because Quickley is a dangerous perimeter shot-maker. But he’ll want to come back with a more refined scoring package when he’s run off the three-point line.

If there was ever a season to experiment with more moves and shots, this sophomore year is it for Isaiah Stewart. The Detroit Pistons’ priority is still player development during their rebuild. After living up to his reputation as a high-effort competitor—he led all rookies in rebounds and blocked shots in just 21.4 minutes per game—he likely earned the freedom to play through mistakes.

Coaches and the front office will be eager to see just how good Stewart can be, so he should have a relatively greener light.

Billed as an energizer out of college, Stewart’s power, motor and aggression carried over to the NBA. The surprises were his flashes of shooting, face-up play and defense. At baseline, he should be able to make an impact by crashing the glass, hustling and being physical. But Stewart might as well take advantage of his playing time and the team’s low expectations to keep attacking in different ways as a scorer while embracing the role of rim protector.

Emphasis for 2021-22: Continue playing to strengths

Three-point shooting improvement would obviously elevate Jae’Sean Tate’s game. But he’ll earn plenty of minutes without a jumper just by playing to his strengths as a high-energy defender and versatile, efficient offensive player.

The Rockets should have more scoring weapons next year after the draft and free agency. Tate needs to continue embracing that Swiss-Army-Knife supporting role, which values his ability to capitalize opportunistically as a driver, passer and finisher (without shot-hunting), while causing problems for opponents with his defensive intensity.

Assuming at 26 years old that Tate doesn’t suddenly return as a shooter, he’ll want to maintain that 59.5 two-point percentage and 2.5 assists-to-1.4 turnover rate. Any extra creation or jump-shot development should be considered bonus.

It’s still all about the long-term picture for Patrick Williams, who’s only 19 years old. He played to his strengths and picked the right spots last year, resulting in an efficient rookie season shooting 48.3 percent. In 2021-22, Williams should just raise his aggressiveness to expand on each skill that drives his versatility.

Last year, we saw flashes of Williams driving past closeouts, live-dribble passing, shooting off the dribble and hitting spot-up threes. As a sophomore, the Chicago Bulls should encourage more grab-and-go ball-handling, attacking his man and attempts at turning self-creation into one-on-one shot-making.

Williams has a unique, powerful body and agility for a player with his particular skill set. He’ll be a problem for defenses once he becomes more decisive and assertive. Williams should be aggressive in season No. 2 and show more of a willingness to make mistakes.