How Roman gladiators got ready to rumble 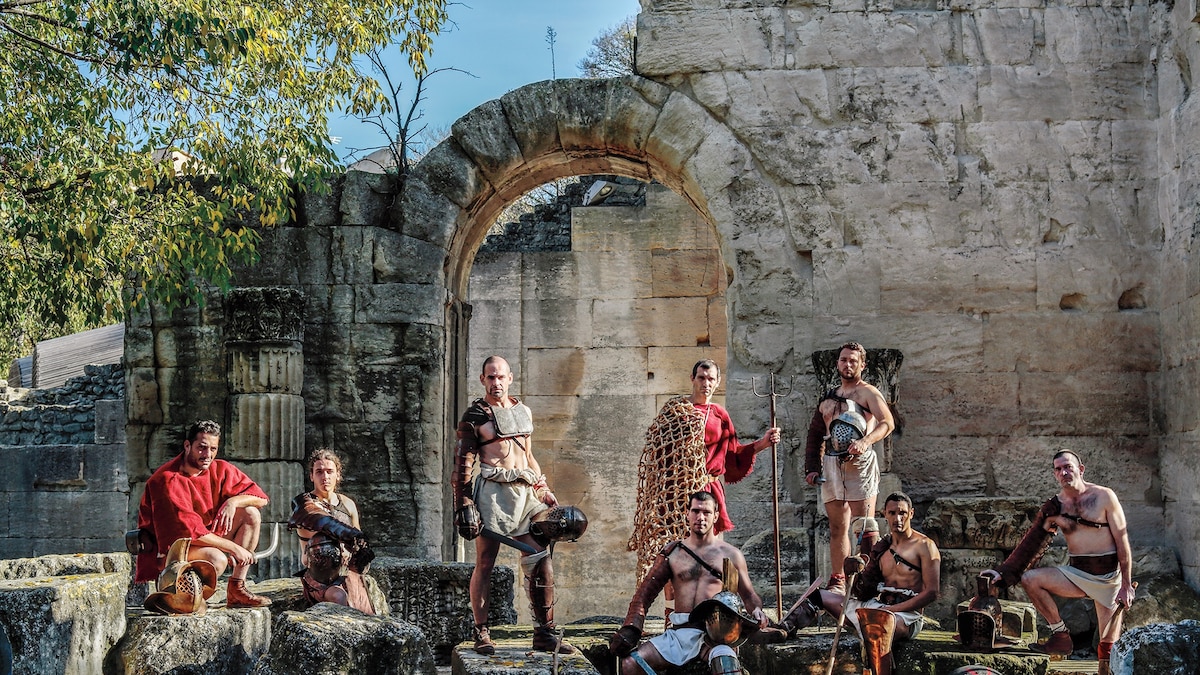 More than 2,000 years after gladiators were squaring off in Roman arenas, the world remains obsessed. Thanks to modern-day literature and films—and the fact that ancient amphitheaters remain standing throughout the former Roman Empire, notably the Colosseum in Rome—warring gladiators are one of the most familiar aspects of Roman culture.

But new archaeological studies have determined gladiator spectacles were not bloody free-for-alls among men who fought to kill. Instead, they were highly regimented and systematized performances executed by expertly trained athletes, choreographed to create maximum suspense for audiences. Here’s what the ancient gladiators really faced.

In the early days of the Roman Empire, gladiators were enslaved peoples, criminals, or prisoners of war brought to the arena in chains. But by the first century A.D., being a gladiator had become a lucrative position, and literary sources suggest for some it was even a career choice. Some aspiring freeborn fighters signed away their rights and became enslaved as a high-risk way to pay off debts or escape a life of poverty. Others were criminals sentenced to serve as gladiators—a lighter punishment than execution, because there was a chance of being free someday. Most were professional fighters; some even had families waiting for them outside the ring.

Nevertheless, all gladiators ranked at the bottom of ancient Rome’s rigidly hierarchical society, along with sex workers and actors. By law, gladiators were considered property, not people.

(The Appian Way was Rome’s superhighway. How is it being preserved today?)

Gladiators each had their own specialty type of fighting, known as their armatura—the “social media persona” of ancient Rome. Based on their specialty, skill level, and experience, they were paired off in the arena to match strengths with weaknesses to ensure exciting contests.

A nimble, near-naked fighter known as a retiarius, armed with only a net, trident, and small knife, for example, might face off against a lumbering murmillo warrior wearing over 45 pounds of protective gear. The thraex had a distinctive crested bronze and curved sword, while secutors wore a helmet with just two eyeholes and carried a shield and sword resembling those used by Roman legionary soldiers.

Despite these fan favorites that appeared at every match, crowds always loved a surprise. Literary sources and tombstones include references to a variety of more exotic gladiator types deployed to add a splash of excitement to the familiar lineup. Some included the essedarius, who thundered into the ring in a horse-drawn chariot; the scissor, who wielded a curved, half-moon-shaped knife per­fect for cutting the retiarius’s net; and the laquearius, equipped with a long lasso to snare his foe.

Fighters who could switch back and forth between two fighting styles were remarkable enough that this skill was some­times mentioned on their tombstones.

(Dinner with the gladiators wasn’t fancy: expect beans and ashes.)

Professional fighters needed professional training. Scholars have found evidence of dozens of gladiator schools across the Roman Empire, where gladiators trained year-round for fights that occurred only a few times a year. A gladiator training complex in Rome had at least four facilities in the shadow of the Colosseum, one with a tunnel leading directly into its lower levels—along with a medical facility, warehouses for sets and props, and a rehab center for wounded fighters.

A spectator area at one of the Rome facilities suggests workouts might have been an attraction on their own. Gamblers looking to check out fighters in per­son or fans eager to watch the rippling, bulging muscles of their favorite gladiators might have even paid to watch training sessions.

(Take a step inside a gladiator’s arena.)

Gladiator barracks were expensive to run, and many belonged to the emperor or rich Romans. Managed by impresarios called lanistae, typically ex-gladiators who had won their freedom in combat, the barracks employed a range of specialists. Staff included doc­tors charged with giving fighters the best medical care, unctores, or “ointment men,” responsible for oiling and massaging gladiators after workouts, and a complement of cooks, armorers, and other staff.

Brave performances in the arena could transform gladiators into popular heroes and even earn prisoners their freedom. The contradiction the gladiators represented—people of lower status and possibly enslaved, yet popular performers—may have contributed to the adulation from fans: Watching and getting up close to them offered rulebound Romans a thrill of the forbidden. “They were like sexy rock stars,” says art historian Katherine Welch. Roman writers rolled their eyes at wealthy women who swooned over gladiators, but the attraction seems to have been more or less universal. Take Celadus the Thracian—a promising newcomer to Pompeii with three wins under his helmet who was “the sigh of the girls,” according to an admiring graffito; or his trident-wielding compatriot Crescens, “netter of girls by night.”

(Chariot racing was the Formula 1 of ancient Rome.)

Most gladiators didn’t fight to the death. For every 10 gladiators who entered the ring, scholars estimate nine lived to see another day. However, occasionally death was the inevitable outcome, notably if the sponsor—the rich patron paying for the spectacle—demanded it. If the loser wasn’t to be spared, the winner was expected to deliver the final sword cut, typically a swift stab down through the neck to the heart. If neither figure was capable at the end of a particularly bloody bout, a masked executioner, carrying a heavy hammer, was on hand to deliver the death blows.

“Killing gladiators is done quickly and cleanly,” says John Coulston, an archaeologist at the University of St. Andrews in Scotland. “It’s a professional courtesy between gladiators—if somebody is going to die, make it as painless as possible, and absolutely deadly.”

Women in the ring

Some historical accounts and a handful of surviving stone carvings record the rare appearance of sword-wielding women, a shocking thrill for ancient Romans who thought most women belonged at home. Scholars debate as to whether women actually fought as gladiators or not. A carving found at Halicar­nassus, in what is today Turkey, depicts two armed women in gladiator gear. Their stage names, Amazon and Achillia, are accompanied by the result of their fight: a draw. This carving corroborates a handful of ancient accounts of women fighting in the arena.

A few ancient authors made clear that women occasionally appeared in the arena, notable because it was so rare. Romans asso­ciated women with the home; women fighters, meanwhile, were connected with legendary, far-off tribes like the Amazons. “When­ever the audience of an amphithe­ater saw a woman appearing in the arena with arms, and using them skillfully,” writes University of Granada historian Alfonso Manas, “they regarded it as the epitome of exoticism and luxury.” Women fighters were scandalous enough that the emperor Septimius Severus banned them in A.D. 200.

Although the carving of Achil­lia and Amazon confirms female gladiators competed in the arena, other evidence is more controversial. A little-known bronze statue at the Hamburg Museum of Arts and Crafts depicts a woman naked from the waist up, raising what looks like a curved sword or dagger in her left hand and gazing down, as if at a defeated opponent. Her leg is wrapped in leather or fabric straps known as fasciae, typical gladiator gear. In a 2011 paper, Manas argued the statue rep­resents a female gladiator—only the second known piece of visual evidence for women in the arena.

But others say the statue is more likely an athlete, holding aloft a strigil—a scraper Romans used to remove sweat, oil, and dirt. The lack of a helmet and armor suggests she wasn’t a fighter. “No gladiator is depicted with so little protective clothing,” says historian Kathleen Coleman.

(Vestal Virgins were some of ancient Rome’s most influential women.)

Elaborately decorated with storks fighting snakes, this leg protector was part of a pair worn by a thraex-style gladiator in Pompeii.

Elaborately decorated with storks fighting snakes, this leg protector was part of a pair worn by a thraex-style gladiator in Pompeii.

Kenya wants its stolen treasures back. Replicas could spur their return
Florida’s largest-ever python has been found. Here’s the untold story of its discovery.