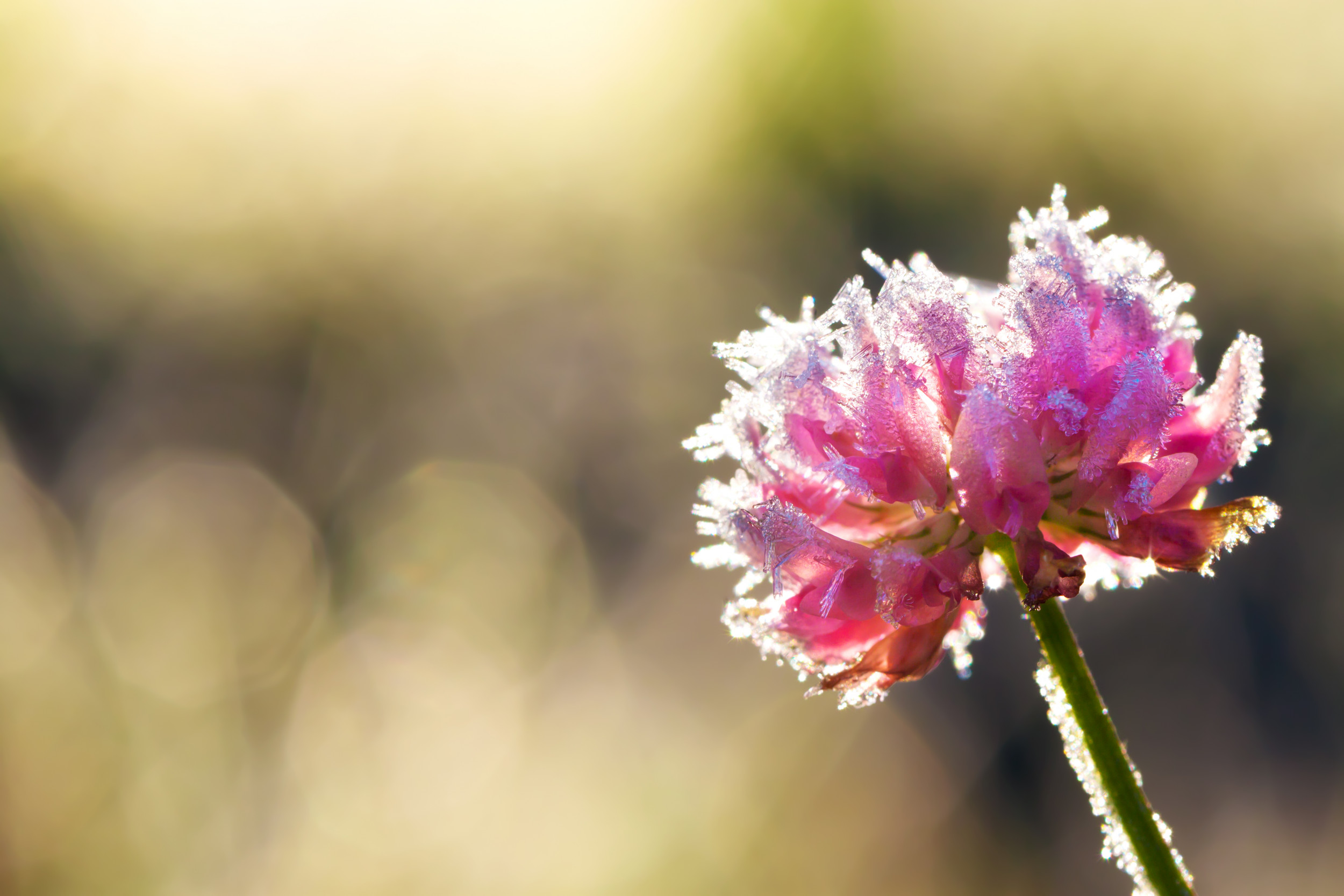 Keeping your plants alive and thriving in cold weather—and preventing damage from frost—is not impossible if you prepare enough in advance, so timing is key.

Frost is forecast when temperatures get closer to 32°F. But as it’s always colder closer to the ground, frost can happen even when air temperatures are still just above freezing.

There are three varying degrees of frost and each causes different levels of damage:

Some plants are more susceptible to frost than others. Fully established plants are less prone to damage from frost than newly planted, young ones.

Those with maroon or bronze leaves have a higher tolerance for frost, as these leaves absorb and retain heat, as do hairy-leaved plants, according to The Old Farmer’s Almanac.

Plants that are compact are naturally less susceptible to frost since they have a smaller proportion of their leaves exposed to cold and drying winds. Similarly, closely spaced plants also help protect each other.

Here we look at some basic steps for protecting plants from frost and cold weather conditions.

The U.S. National Weather Service issues frost advisories and freeze warnings, which allows you to plan how to protect your plants at the beginning or near the end of the growing season. But these advisories/warnings are only useful so long as a hard freeze or killing freeze has yet to take place, the NWS says.

To start preparing your plant for cold weather conditions, you should find out the predicted frost date (the average date of the last light freeze in spring or the first light freeze in fall) in your area, which varies across the country.

Frost dates, which are calculated using data from the U.S. NOAA (National Oceanic and Atmospheric Administration) National Centers for Environmental Information, are only estimates based on historical climate data and not set in stone, The Old Farmer’s Almanac advises.

But these dates are useful to know to get a head start on winter preparations for your plants.

It’s important for plants newly planted in the autumn to be well-watered going into the winter before the ground freezes.

Speaking to Newsweek, author and house plant expert Lisa Eldred Steinkopf explained: “This is especially important for evergreen plants. Whatever water they have stored is all they have to get them through the winter as they cannot take up water after the ground is frozen. Early spring is also important for watering.”

If the ground is no longer frozen, and there hasn’t had any significant rainfall, your plants need to be watered. Plants, especially evergreen ones, are photosynthesizing when the ground is thawed and they require water to do this. So it’s imperative that your plants are watered if the ground has thawed, Eldred Steinkopf advised.

It’s crucial to water well before a frost because moist soil can hold up to four times more heat than soil that’s dry. This allows heat to be conducted faster to the surface of the soil and keep the air above it around five degrees (Fahrenheit) warmer.

Another way to retain heat using water is leaving milk jugs, painted black, full of water in the garden. These jugs will absorb heat during the day and release it at night, the almanac advises.

It’s also important to choose the right spot for your plant before the onset of cold weather conditions. For example, plants that require protection from drying winter winds should not be placed on the west side of the house, Eldred Steinkopf said.

A strong wind can make frost even more damaging, once the temperature has dropped to a below freezing level, warns the U.K.’s Royal Horticultural Society (RHS).

Cold winds strip moisture from evergreen plants quicker than it can be replenished, which can lead to leaf browning at their tips and margins.

Tender plants survive the winter better when planted in a sheltered sunny spot because “new wood [stems that develop in the current season] is ripened by the sun accumulating more carbohydrates during the growing season,” which makes it more resistant to frost, the RHS explains.

You’ll want to avoid planting tender plants in open, exposed areas or in low spots where cold air settles. It’s better to put tender plant species near a wall facing south or west, which absorbs heat during the day and radiates it at night.

It’s also worth noting that your plant will warm up more if it “slopes toward the sun,” according to the almanac. “Cold air, which is dense and heavy, will flow away from plants growing on a slope—what the experts call ‘drainage.'”

One of the most common ways to protect plants is to cover them with a row cover or a blanket, which traps heat and keeps your crops warmer.

Made of non-woven polyester, row covers are sold in different thickness levels or weights. Bed sheets, drop cloths or another medium-weight fabric can also be used for covering plants but do not use plastic.

Eldred Steinkopf warns plants should never be wrapped in burlap, which is a woven fabric typically made from skin of the jute plant or in combination with vegetable fibers.

“Only use a burlap screen if it is a windy spot or salt will get on your plants. If they are well watered until the ground freezes they won’t need to be wrapped. Never let burlap touch the plants,” she said.

The cover should be placed draped loosely to allow air to circulate and the material should not be resting on the plant. It should also be secured to the ground, using rocks, bricks or stakes, to keep it from touching the foliage beneath it.

Lightly water your plants before setting the covers over them during the late afternoon or early evening. It’s best to have the covers in place a good amount before sunset.

Around mid-morning the next day, when the temperature rises, remove the covers so the plants get full exposure to sun.

Sometimes there can be an unexpected early freeze, so it’s worth covering your plants to be prepared for this “freak incident,” the almanac warns.

For smaller plants, you can create “hot caps” by cutting the top half of empty milk cartons or soda bottles or using paper bags or newspapers.

Plants grown in containers should be brought to a sheltered area in cold weather and the pot can be wrapped in bubble wrap for added protection.

“In winter the biggest enemy of crops in pots is persistently wet potting soil. Make sure there is adequate drainage by placing containers onto pot feet (or improvise with small rocks),” the almanac explains.

You’ll also want to cover your soil to protect soil life, such as worms, bugs and fungi, which are beneficial to plants. Add a thick layer of organic matter to the surface of the soil to protect it from erosion and also to keep soil life well-fed, The Old Farmer’s Almanac notes.

The type of soil you’ve got can affect the chances of your plants being damaged by frost. More moisture is released into the air by deep, loose, heavy soil than thin, sandy, nutrient-poor soil. You want to keep the air humid because the more humid the air, the higher the dew point will be, which reduces the chances of frost forming on your plants.

Do not add fertilizers rich in nitrogen late in the season as they “stimulate soft, sappy growth,” which makes plants especially prone to frost damage, says the RHS.