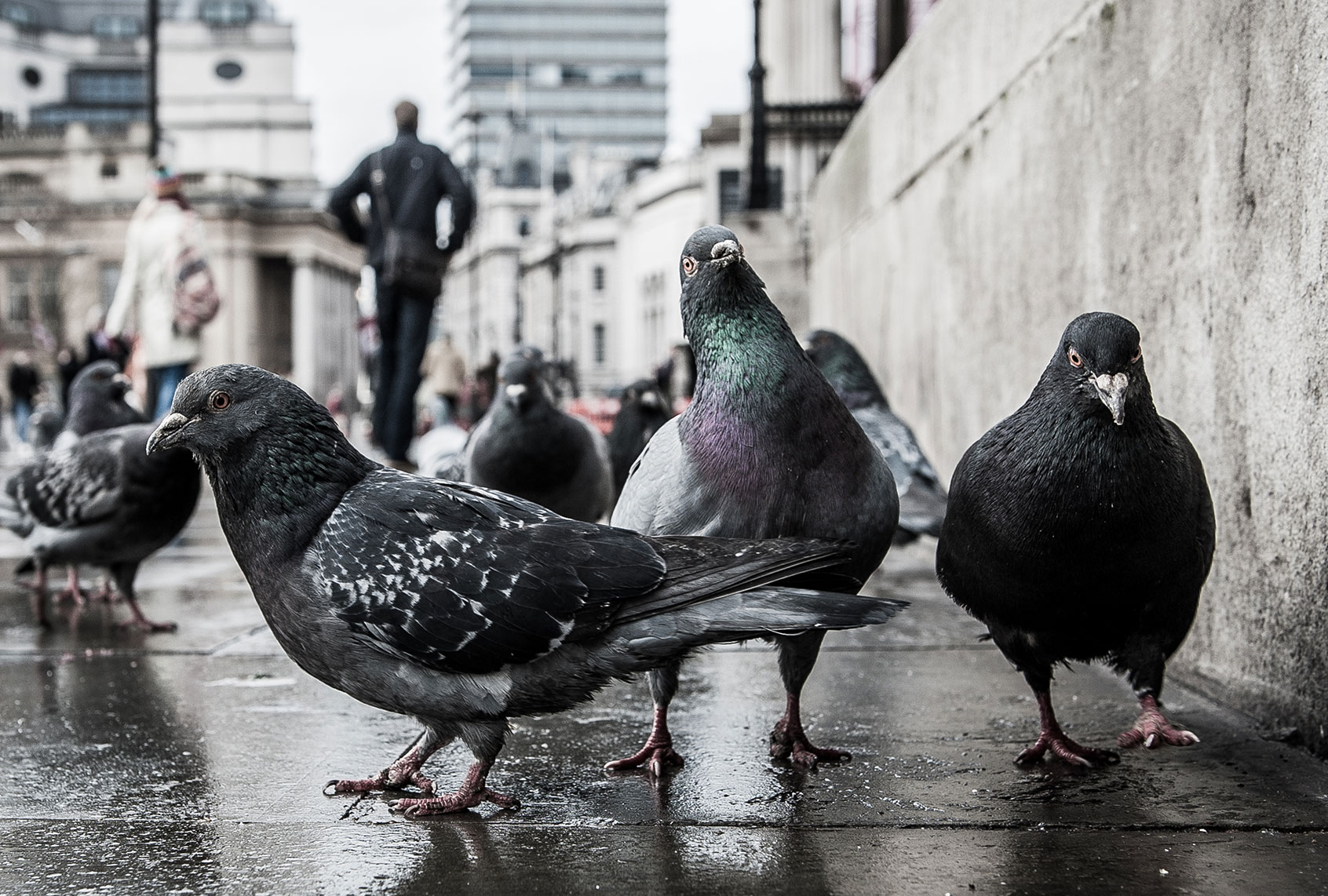 What words come to mind when you think about pigeons? Nasty, dirty, gross — maybe just plain “ew“? Pigeons are ubiquitous to urban life, but humans are not generally fond of them. And while they may have a reputation for being the rats of the sky, author Rosemary Mosco is here to change that.

In her new book, “A Pocket Guide to Pigeon Watching: Getting to Know the World’s Most Misunderstood Bird,” Mosco, a bird-watcher and science communicator, argues that our ignorant assumptions about pigeons are all wrong. They are not the “rats of birds,” as some say. Rather, they are unique and intelligent dinosaur descendants that have been abandoned by today’s humans. Despite their tendencies to use their sharp beaks and claws to tear their way through human trash, the societal hatred toward pigeons is unwarranted. In fact, if only people really understood how special these birds are, perhaps we’d treat them better — or at the very least, give them the respect they deserve.

But Mosco isn’t painting these urban cooers as saviors to whom we should build shrines, either. Rather, she argues that we should seek to enjoy them instead of hating them. For instance, pigeon-watching could be a relaxing and entertaining activity for city dwellers, if not for our stigmas towards pigeons. Though it may sound like the realm of bird nerds, Mosco makes the case that pigeon-watching can be just as thrilling as traveling to your nearest national park to watch hawks.

Salon chatted with Mosco to learn more about why pigeons are so misunderstood, how to see beauty in them, and how people can enjoy the presence of pigeons instead of loathing them. This interview has been condensed and edited for print.

I’m curious about why you decided to write a book about pigeons, of all birds.

Well, I’ve been a bird watcher for most of my life. I really like how birds are pretty much everywhere. That means that anytime you’re bored, you just look around, and you’re going to be amused and pulled into [bird] drama — you’re going to see beautiful things.

I’ve also lived in all sorts of different cities, my whole life. So, pigeons are kind of a natural thing to start watching when you live in cities — and then the more you look at them, the more amazing they get.

Part of the book is about how pigeons are misunderstood. And I’m curious if you’ve come across someone in public who perhaps saw a pigeon and was like, “Ew, I hate pigeons.” What might you tell this person?

That did actually happen to me once. And it sort of triggered the idea for the book, or at least got the idea cooking.

I was waiting to catch the subway, and there was a woman waiting. She looked about my age, she was sort of frustrated and she took, like, a kick at a pigeon. She didn’t kick it, but did kind of threaten it. I was really shocked, and I said “Oh, don’t kick them,” and she just turned on me and said, “You know, they’re garbage, they’re trash, they shouldn’t be alive.”

Yeah. And I thought, “what is it about pigeons that engenders that kind of intensity?” I’m really hoping that this book will help people understand why they’re here, and why they like to hang out on roofs, and maybe why we should be a little more understanding.

Can you summarize why people should be more understanding and kinder towards pigeons?

The wildest thing to me about pigeons, at least the city pigeons around us — there are different kinds of pigeons — that they are feral domesticated animals. They’re just like a dog, a cat, or a feral horse or a feral goat. They were domesticated by humans a really long time ago, thousands of years ago. But the difference with pigeons is that we’ve sort of forgotten that we domesticated them.

So we brought them from their homes in parts of Europe, Asia and North Africa, and then forgot why we did it. And now we’re sort of angry that these animals are in our space. And I think that that’s kind of a real shame, because you learn more about nature when you understand the history and the context of why they’re here.

When you put it into perspective like that, it’s really a sad story about humans abandoning these birds.

Right? And they were really bred to be good at living near us. And then, we forgot, and now they keep hanging around us. And we’re like, “why are they here?” Well, that’s why.

In the book you compare pigeons to dinosaurs and puppies, which I thought was really clever. Could you explain to our readers that connection?

A few different things happened. Probably the first is that they went feral, which would have happened pretty much around when we domesticated them; some of them would have gotten out. And then all of the reasons that we domesticated them became obsolete. So, I think of them as kind of like a fax machine. It used to be really useful to use pigeons for meat, and later they were useful for carrying messages, and to use them for their poop — which is an excellent fertilizer — and a whole bunch of other reasons, all of which have been replaced by technology, pretty much. Or in the case of meat, you know, we have factory farms with chickens now.

So they became obsolete. And then in New York in the 1960s, we started to blame them for a bunch of illnesses, in particular a meningitis outbreak. So then people started to think, ew, not only are they these sort of useless stray things, but also they’re getting sick. And up until then, for the most part people had pretty much held them in either neutral or really high esteem.

I was really surprised to hear the super-rich, back in the day, really valued pigeons. Or, how you said that pigeons were like, the original internet. Is there a way to reintegrate these uses back into our society?

Well, there are definitely places in the world where people still eat them, or still breed fancy pigeons So partly what’s going on is just that, where we live, people sort of got less into pigeons for this part. And there are even pigeon clubs in America — there are pigeon shows, like dog shows. I’ve never been to one, because I wrote this book mostly during the pandemic, but I really want to go to one.

But people are definitely being innovative with pigeons. There’s an artist who was attaching LED lights to pigeons and having them fly around, doing an organic drone show. And more and more, people are keeping them as pets, which I think is really interesting. You can carry them around on your shoulder and have them run around your house and you buy pigeon pants for them, which are basically diapers. There is this huge community of people online who have pet pigeons, they share cute photos . . . they definitely have a role to play.

I’m curious what surprised you the most about pigeons while you were reporting on this subject?

I think the most surprising fact about pigeons might be that they feed their babies milk. Both male and female pigeons are able to produce milk in this area of the digestive system called their crop.  It’s really amazing. It’s stimulated by prolactin, which is the same hormone that stimulates breast milk in human women. It’s got proteins and fats and it helps boost the immune system. It’s so wild to me that they’ve independently evolved this way to support their babies, and it’s really interesting that both the males and the females can do it.

So that’s why it’s hard to raise pigeons in a factory farm setting, because they have to feed their children milk for the first few days, which is wild to me.

Then some of the wilder notes from history, like Nikola Tesla falling in love with a pigeon. She was the only love of his life; that blew me away.

For people who don’t really live near nature, do you think that pigeon watching can provide readers with a nature fix?

Yeah, for sure. There’s so much nature in our cities, and so much of it is connected with human culture and human history. And I feel like for a long time, people have written off urban nature, because they see it as not, like, “real” nature. But there’s so much cool stuff that you can see in cities, and you can really just immerse yourself in nature, even in the depths of the city. And pigeons can be a gateway for that.

Do you have any tips for people who are interested in getting into pigeon watching?

Yes, keep your eyes open and when you see some pigeons, give them a second look. Start to notice the different colors and patterns. If you see pigeons, maybe two pigeons near each other, ask yourself: “Are they a romantic mating-for-life pigeon pair?” They might very well be. Then look at their behavior. If they suddenly take off in the air, look for a falcon.

That’s kind of how you pigeon-watch, it’s pretty easy. You can do it when you’re commuting or when you’re grabbing lunch. Just give them a second look.