Skip to content
Latest News:
Amazon’s upgraded Kindle Paperwhite lineup makes the best e-reader even better
HP welcomes Windows 11 with a new Spectre, an Arm laptop, and a tablet with a swiveling camera
How to buy the perfect PC case 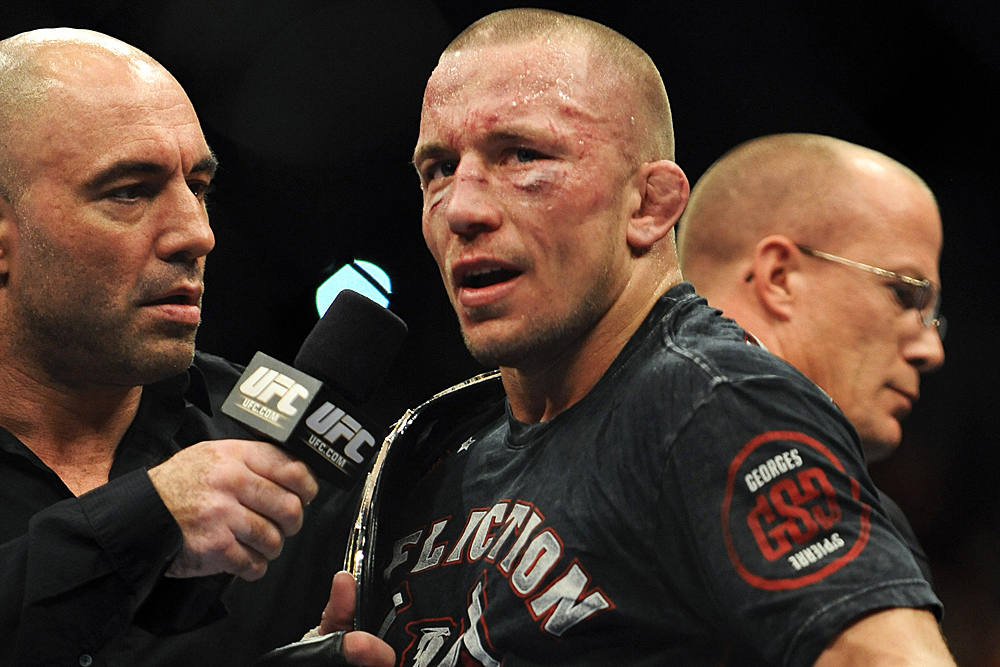 Georges St-Pierre shocked the masses when he decided to walk away from MMA in 2013, but he had his reasons.

One of the most dominant champions in UFC history, St-Pierre (26-2 MMA, 20-2 UFC) vacated his welterweight belt after he edged out Johny Hendricks for his ninth consecutive title defense at UFC 167. Although he was still in the prime of his career, St-Pierre explained how several underlying issues led to his decision.

“I had a lot of issues with the UFC because of performance-enhancing drugs,” St-Pierre told Burt Watson in the latest “Legend 2 Legend” episode. “We were talking behind closed doors, and I know they know that a lot of their athletes were using performance-enhancing drugs. But I’m not stupid. I know how business works. They didn’t want to test them because they know a lot of their champions would fall. I think I carried too much pressure for too long. I was champion for a long time, and it’s hard to become champion, but it’s even harder to stay champion because you have a lot of pressure on yourself.”

St-Pierre’s retirement was lengthy but turned out to not be permanent, as he returned in 2017 to defeat Michael Bisping for the middleweight title at UFC 217.

“I think I just needed vacation, and I was in some kind of depression at the time,” St-Pierre said. “I was ashamed to admit it because I had a dream life. I have a lot of money, I’m healthy, and I was ashamed to admit that I was going towards depression, because I didn’t know how people would think about me. They would be like, ‘Oh, what does he have to complain for? He’s champion of the world, he’s rich, what the hell is he complaining for?’ So I was ashamed, but I was going through mental depression and on top of that I was fighting in the UFC against performance-enhancing drugs, and I had a lot of personal issues. I just needed a break.”

St-Pierre’s split decision win over Hendricks was viewed as controversial by many who believed Hendricks won after he pushed the champion to the limit like never before during his title reign. Looking back, St-Pierre admits he should have walked away a little sooner.

“I think I should have retired after the Nick Diaz fight (in March 2013),” St-Pierre said. “I should have taken a break. If I would have done that, perhaps I would have come back earlier in my career, but I did not because I felt the need to always fight the next guy because there was always a next guy, and that’s how I realized as soon as you finish a fight, there’s a next one and a next one, because the sport of mixed martial arts is promoted about what’s next. It’s not promoted about what happened in the past. What’s next, what’s next, sell, sell, sell. We need to sell the next one, build up who’s the next big thing that can beat the champion.”

During St-Pierre’s long-tenured championship reign, the U.S. Anti-Doping Agency drug testing program had not been implemented by the UFC. A strong advocate for drug testing, St-Pierre said he requested that Hendricks get tested prior to the fight, but when the UFC didn’t grant his wish, he was no longer interested in competing if he wasn’t guaranteed a level playing field.

“On top of the mental and emotional struggle, I had a sh*tty training camp,” St-Pierre said. “I was tired, like mentally burned out. So I was training for the fight and trying to make it in a way that – because in the interview I was telling Johny Hendricks, ‘OK, let’s do drug testing before the fight,’ and he agreed in the beginning but (later) said no. He didn’t want to do it, and I learned after that the UFC told him not to do it because they didn’t want to start a trend that people start doing it.

“Because I know there are a lot of good fighters that are honest and don’t cheat, and it would have made a lot of guys that are honest who think that their opponent might be cheating, to do the same trend and they didn’t want that to start. So they told Johny Hendricks to not do it because I wanted to do it with VADA (Voluntary Anti-Doping Association) at the time. So after the fight with Johny Hendricks, right after the press conference, I went in a room with Lorenzo (Fertitta) and Dana (White), and I told them what I think of this whole thing. … I thought it was corrupted, and I left.”

Check out the video above to hear GSP speak more about what prompted his decision to walk away. The full episode of “Legend 2 Legend” can be seen below.