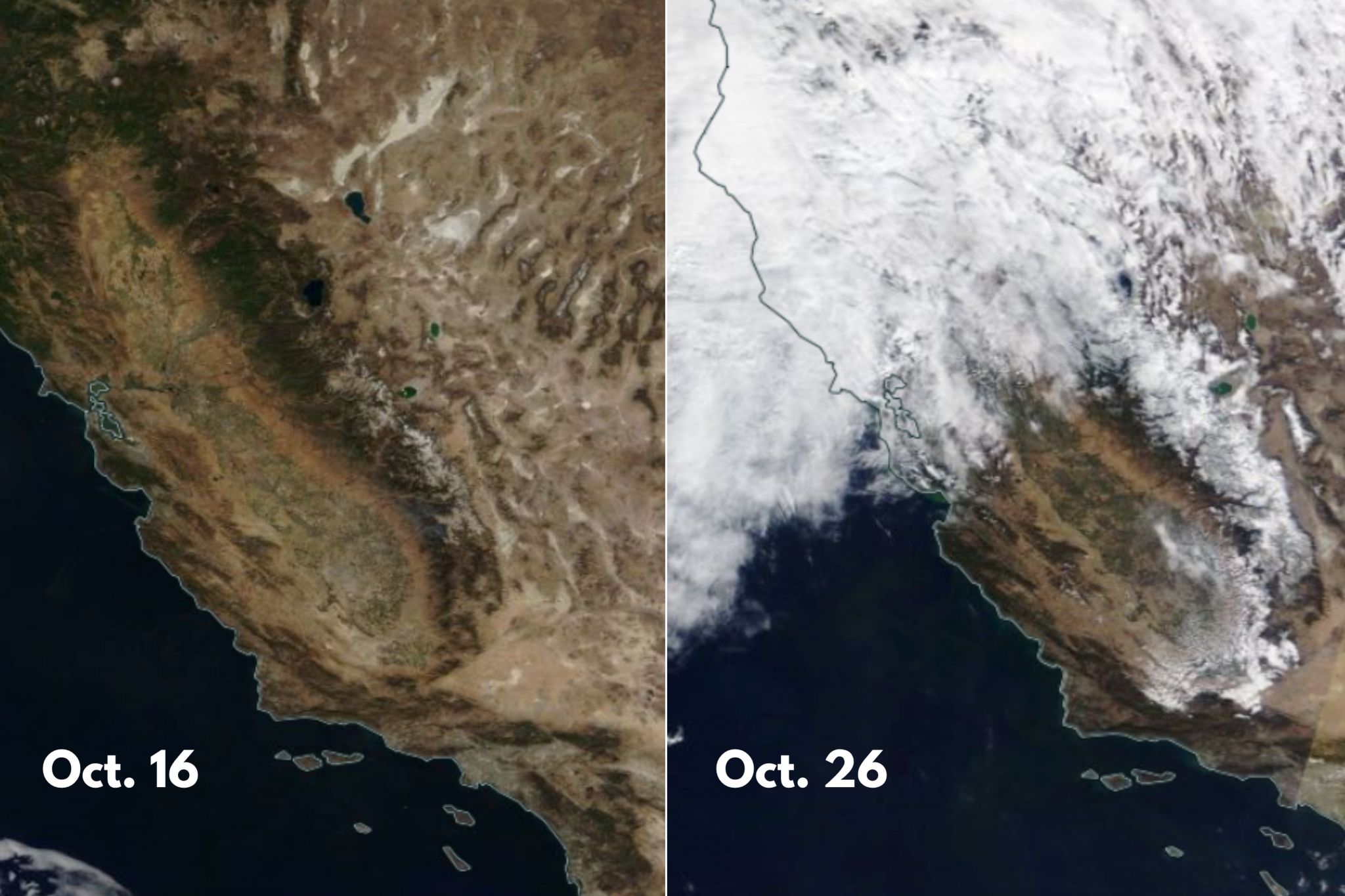 In a photo from NASA’s Worldview tool on Oct. 16, the Sierra is a stretch of brown straddling California and Nevada. On Oct. 26, the mountains are blanketed in snow.

Winter arrived early in California’s mountains when a potent storm barreled across the region Sunday into Monday, delivering  significant snow fall  — nearly three feet to higher elevations above 7,000 feet above sea level — across portions of the northern and central Sierra.

“Definitely impressive snowfall for late October,” said Hannah Chandler-Cooley, a forecaster with the National Weather Service’s Sacramento office. “It really doesn’t tell us much about how the rest of winter will go.”

Here are some snow totals for the recent storm over the northern Sierra. Snowfall amounts up to 3 feet were reported. #cawx #snow pic.twitter.com/azV2znpYTZ

The California Department of Water Resources uses the Northern Sierra 8-Station Precipitation Index to help measure the size of the snowpack and determine the status of water supply. The index pulls data from eight locations spread across the northern part of the mountain range. State climatologist Mike Anderson said the October precipitation (rain and snow) ” makes up about 20% of a water year’s expected total” — that is about 20% of the total precipitation that the region gets on average across an entire water year that runs across 12 months from Oct. 1 to Sept. 30.

“While this is a great start to the water year and much needed, it is a reminder that our wettest months (historically) are still ahead and are crucial that we get rain and snow in those months and throughout the year to really help end the drought,” Anderson wrote in an email.

During normal years, the winter snowpack in the Sierra Nevada supplies about 30% of water statewide when the spring melt comes and water runs off to be captured in the state’s system of reservoirs.

Winters, however, have not been normal lately.

On April 1, the date when the snowpack is typically at its deepest and contains the greatest amount of water, the state Department of Water Resources’ system of electronic monitors found it was only 59% of average.

Then, in a stunning development, about 80% of the predicted runoff never appeared. Soils were so dry and temperatures were so warm that the water instead was soaked up or evaporated, and reservoir water storage fell to shocking levels.

One of those huge reservoirs, Lake Oroville, has risen more than 20 feet since the series of storms began last week, but the Department of Water Resources website showed it was at just 27% of capacity Tuesday.

The early season storms were beneficial but officials say much more rain is needed.

“We have much less accumulated precipitation over the past few years than we should normally receive and the soils are particularly dry — we cannot fix this condition with one storm,” Anderson said.

With the storm, the northern Sierra generally received two to 20 inches of snow, with a few sites reporting more. Snow depth actually dropped to one to two inches in the central Sierra and just a trace fell in the southern end of the range, the department said.

The Associated Press contributed to this story.