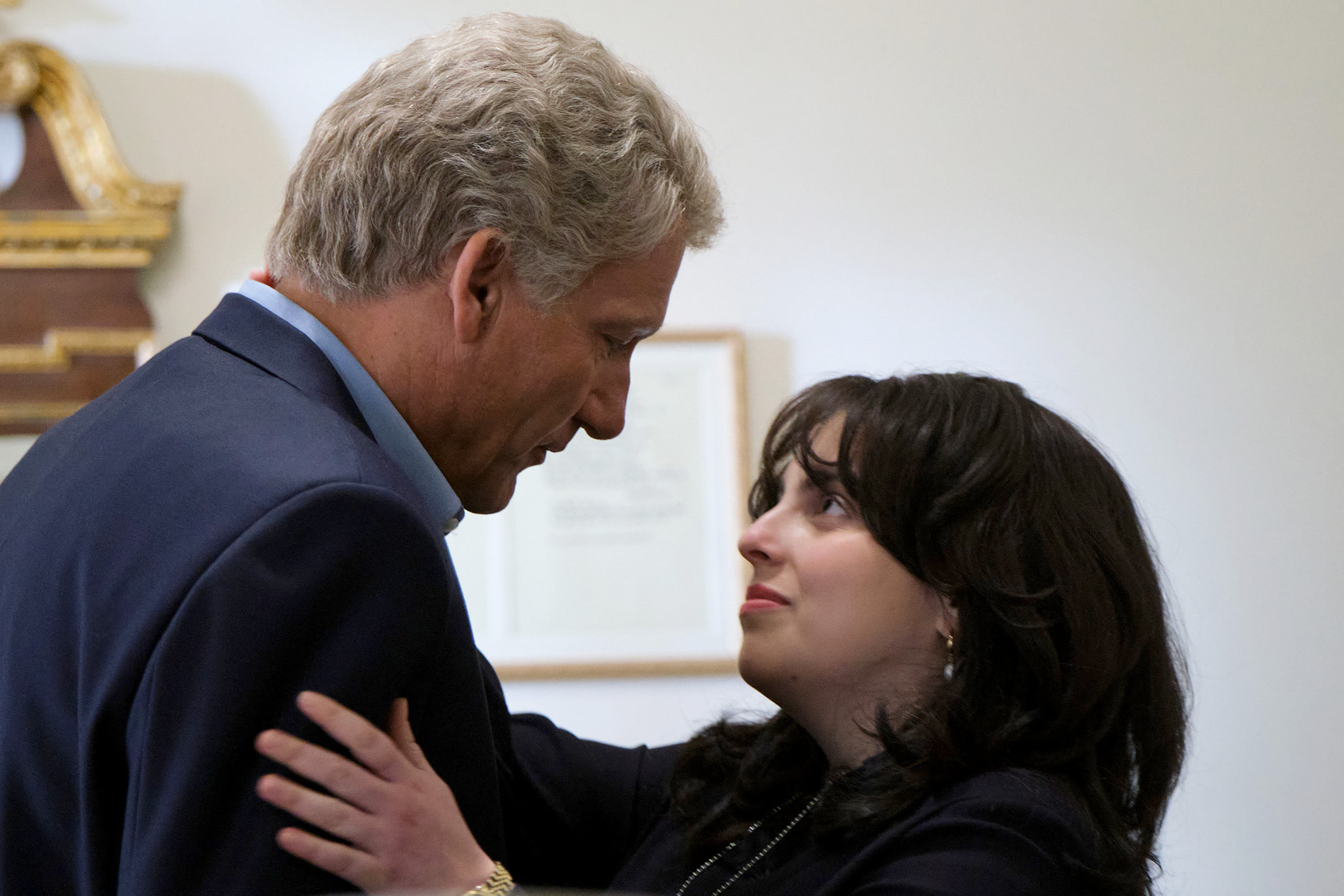 Episode 2 of Impeachment: American Crime Story, titled “The President Kissed Me,” brings President Bill Clinton (played by Clive Owen) into the story as he embarks on a relationship with intern Monica Lewinsky (Beanie Feldstein).

As usual with shows based on true stories, some of the most outlandish moments in the episode are the most true.

The FX series is based on the book A Vast Conspiracy by Jeffrey Toobin, which also reveals even more details about that time in the Clinton presidency that did not make it into Impeachment.

Read on for our breakdown of what is fact and what is fiction in American Crime Story Season 3, Episode 2.

Between November 14 and November 19, 1995, and from December 16, 1995 to January 6, 1996, the federal government was shut down after Clinton vetoed the spending bill sent to him by a Republican-controlled Congress.

During this time, 90 of the 430 White House employees were furloughed, meaning that the office was relying on interns – interns like Monica Lewinsky, who was working for Chief of Staff, Leon Panetta.

Though Impeachment shows this later in the episode, it was on the second day of the shutdown (November 15) when Lewinsky flashed Clinton the top of her thong in an attempt to make good on what she later called “intense flirting” eye contact.

“A licking in the midterms”

Clinton cites this as one of his presidential problems in his meeting with Lewinsky. In 1994, the Republicans won 10 governorships, 8 Senate seats and 54 in the House, allowing them to take both houses from the Democrats. This was the first time the party had control of both houses of Congress since 1952.

When first talking to Monica, Clinton discusses his first trip to the White House, where he shook hands with John F. Kennedy as part of a trip organized by the Boys Nation group.

This meeting took place on July 24, 1963 when Clinton was 16. The moment was even captured on film.

“I have a huge crush on you”

This is something Lewinsky says in her first private encounter with the President in the show. This really happened, but for some reason the show has slightly changed what she said. In reality, Lewinsky later claimed she said, “you know, I have a really big crush on you.”

“The President kissed me”

The episode gets its title from this quote, said to Lewinsky to her mother. This kiss happened shortly after Lewinsky’s “really big crush line,” after which Clinton invited her into his private study and kissed her for the first time.

Though it is not shown in the episode, the pair also had a second meeting that night. An FBI summary of their interview with Lewinsky said that Clinton, “put his hand down into her pants. The President received a phone call from a Congressman or Senator. While talking on the telephone, the President kept “his hand in Lewinsky’s pants to stimulate her, thereby causing her to have an orgasm or two.”

Monica kicked out of the White House

On April 5, 1996, Lewinsky was moved from the White House to the Pentagon. Per Toobin’s book, she was let go because she was spending too much time trying to be around the President, but also because she was not very good at her job of making sure mail from Capitol House made it to the right White House department.

Who knew about Monica and the President?

Asked how many people knew about the affair in the show by Linda Tripp (Sarah Paulson), Lewinsky hints that only a handful of her friends knew.

In reality, at that point, 11 people had been told by Lewinsky about her about the affair – those friends, plus her mother, aunt and therapist.

Impeachment shows Lewinsky and Tripp going antiquing, where Tripp talks about her love of Christmas. This seems to be a reference to what Tripp did after leaving the Pentagon: She moved to Virginia and opened a year-round Christmas store, the website of which still offers copies of her book about her time in the White House, Basket of Deplorables.

The scene where Lewinsky waits in a crowd to see Clinton the day after he was re-elected is based on the following real event, where Lewinsky can be seen in a beret:

Clinton asks Lewinsky to speak to “Betty” to arrange their meetings, in reference to Betty Currie, the President’s personal secretary.

Here’s an explanation for that joke about Bork finally getting to be a Supreme Court justice, if it has confused you in the same way that it confused Paula Jones (Annaleigh Ashford) in this episode. Bork was nominated for a place on the Supreme Court in 1987 by President Ronald Reagan. His appointment, however, was rejected by the Senate.

As the show correctly states, by 1997 Coulter had been fired by MSNBC twice. The first came when she insulted the late US Ambassador to France Pamela Harriman during coverage of her memorial service.

She was then rehired and fired again after a debate with anti-landmines advocate and Vietnam veteran Robert “Bobby” Muller. In Impeachment, Coulter says that she said “people like you are the reason we lost the war.”

This, however, is based on a misquote of Coulter, first reported in Time shortly after the event. In reality, she said “no wonder you guys lost.”

The video where Jones talks about her alleged sexual harassment at the hands of President Clinton is based on real video The Clinton Chronicles, a VHS sold by the organization run by evangelist Jerry Falwell. The video is the source of many Clinton conspiracy theories that continue to this day.

Lewinsky is shown gifting Clinton a model frog. In real life, Clinton collects frogs. One of the numerous sources we have for this is actor Rob Lowe’s book Stories I Only Tell My Friends, in which Lowe tells a story of meeting the President with his son, who was carrying a toy frog. Lowe says Cliton said, “Well, thank you, young man. I bet you didn’t know, but I collect frogs.”

In August 1996, Clinton turned 50 at a lavish Radio City Music Hall. Though American Crime Story does not mention this, Lewinsky claims that she grabbed Clinton’s penis during their meeting at this event.

It was for his 50th anniversary that Lewinsky gave Clinton the tie that is mentioned a few times in this episode: A tie that later becomes part of the trial.

Hat pin and Leaves of Grass

Two real gifts that Clinton gave Lewinsky. We previously saw that copy of Walt Whitman’s Leaves of Grass at the start of Episode 1.

Lewinsky was invited to see Clinton give his weekly radio address on February 28, 1997. It was shortly after this that Clinton ejaculated onto one of Lewinsky’s dresses – a dress that would become a vital exhibit in proving the pair’s affair. After that encounter, the pair would only have sex one more time.