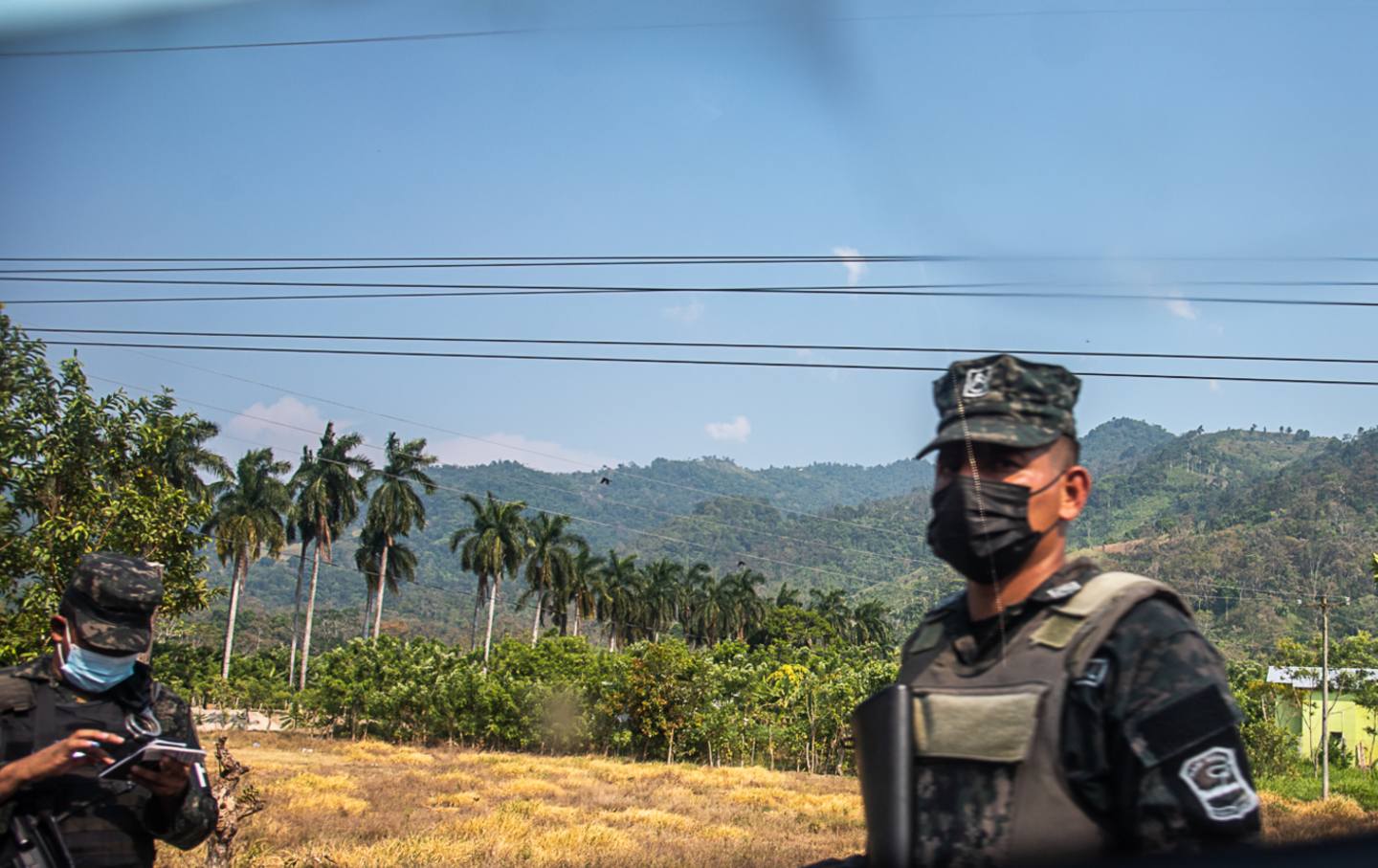 an edro ula, onduras—Above a steaming hot floodplain at the edge of gang territory, a ragged group of tents lays sprawled beneath the highway.

It’s been over six months since back-to-back hurricanes ravaged Honduras. But even now, people displaced by the floodwaters are still living here: over a dozen malnourished families in dark, humid tents in the cavernous space beneath the CA4 highway. Living conditions are less than idyllic: Skeletal dogs prance around burning mounds of trash, while a constant flow of traffic echoes past on the bridge overhead. Places like this encampment have become ground zero for undocumented migrants who’ve traveled to the United States and are facing a climate catastrophe that washed away their homes, an utter lack of employment, and unceasing violence from both the government and gangs. But the Biden administration—selling its immigration policies as a departure from Trump’s cruel racism even as it seeks to stem migrant flows—has different plans in mind.

“We’ve secured agreements for [these countries] to put more troops on their own border,” Tyler Moran, Biden’s special assistant for immigration said on MSNBC on April 12, announcing plans to stop irregular migration by having the Honduran military, among others, deploy 1,500 troops to the country’s US-facing Guatemalan border. “Mexico, Honduras, and Guatemala have all agreed to do this. That not only is going to prevent the traffickers, and the smugglers, and cartels that take advantage of the kids on their way here, but also to protect those children.”

However, critics fear that further militarization of the border will in fact produce the opposite effect. As long as the structural violence forcing people to flee continues, migration out of Honduras won’t stop—but it will, they contend, become far more dangerous.

Bartolo Fuentes, a longtime migrants rights activist, radio journalist, and congressional candidate for the opposition Liberty and Refoundation (Libre) party, sees the new announcement as a way for the Honduran military to make more under-the-table money while putting migrants in greater danger.

“Militarization is a business, nothing more,” he says. Pointing out that Honduran soldiers already patrolling the border are known to ‘“shake down” apprehended migrants to allow them to pass, he says that adding to their ranks will give these troops leverage to demand higher amounts of cash for passage. “Because the more soldiers they put on the border, the more bribes they can charge. That’s the only difference.”

Fuentes, who had to flee Honduras after being targeted by Honduran military intelligence for his work assisting the 2018 caravan, isn’t alone in his suspicion. Amelia Frank-Vitale, an anthropologist with years of experience studying migration in Honduras and Mexico, argues that having more soldiers patrolling the border between Honduras and Guatemala comes with a macabre caveat: More difficult passage means a more lucrative market, and greater control for criminal groups.

The new plan, she says, “will make it harder, it will push people into more remote, difficult topographical parts of the Isthmus. It will also push migration even further into the hands of illicit actors who are very good at both bribing officials and getting through inhospitable terrain, which makes migration both more expensive and more dangerous.… [These types of plans] have never worked to stop migration.”

(The fact that Honduran security forces are already accused of complicity with criminal groups doesn’t inspire confidence either).

The structural reasons forcing people to flee Honduras run deep. Long exploited for its cheap resources and labor—maquiladoras, or low-wage factories, here are popular attractions for foreign investors—Honduras has been convulsed by crisis ever since a US-backed military coup in 2009 overthrew Manuel Zelaya, the democratically elected left-leaning president. Since then, an environment of impunity has unleashed skyrocketing levels of violence, while increasing evidence suggests far-right President Juan Orlando Hernández’s government is controlled by drug traffickers. (The murderous squelching of mass protests following the 2017 presidential election, which both the Organization of American States and the European Union suggested was stolen by the current president, has caused ever more Hondurans to refer to the government as a narcodictadura, or ‘narco-dictatorship’). But the country’s status as a longtime US ally in the region means a steady stream of financial and military aid has remained flowing over the years with few substantial interruptions.

It’s not hard to imagine why the government is so widely loathed.

“What Juan Orlando wants is to just have slaves here in Honduras, working for him,” says Hector Medina, a man living under the bridge in Chamelecon ever since he was displaced by the hurricanes. “He’s a narcotraficante who just wants his slaves here, who doesn’t want people to leave.”

Franklin Otoniel, who’s been living with his partner and their three young children under the bridge ever since the hurricanes swept away the roof of their home, in the adjacent barrio of Chamelecón, says that assistance from the Honduran government has been all but nonexistent: “Here, the government hasn’t helped us in any way,” he said. “Absolutely nothing.”

The newest round of militarization is part of a well-established pattern of ‘externalizing’ the US border, one that can be traced back to Plan Frontera Sur, in 2014, when Mexico, urged by Barack Obama, sent troops to its border with Guatemala to stop US-bound migrants before they reached the Rio Grande. The United States has been active in training other nations to stop migrants, particularly through BORTAC, an elite special forces wing of the Border Patrol.

According to a Honduran border police officer at the Corinto border crossing—who’d been in the force for five years but wished to remain anonymous—BORTAC regularly comes to do training for Hondurans. At the same time, he said, the number of people leaving has risen steadily: “Migration is way more frequent now,” they said. “I remember when I started, there would be one, two, maybe three buses of deportees from Mexico each day. Now there are six.”

The officer showed The Nation a WhatsApp message from a colleague saying that on the single day we spoke, 242 migrants—212 men and 30 women—had been deported and brought through that crossing via bus from Mexico.

For many migrants, the emotional exhaustion of being caught in the deportation machine—the archipelago of detention centers and militarized border lines that expand by the year—is a deterrent in its own right.

At a drop-off point not far from the Guatemalan border, where those buses dump the migrants apprehended in Mexico, returning deportees are greeted with a sign that reads elcome back to your homeland!

Across the street, a group of exhausted-looking, recently deported young men—their backpacks stuffed with clothes, phone chargers slung around their necks—hid from the sweltering heat at a shaded bus stop, their heads hung in dejection and defeat. One man, sitting exhausted next to his duffel bag and wishing not to be named, explained how he was detained and held for months by US border patrol the first time he went. This time—his second attempt to get to the United States—he was captured and deported by Mexican security forces before he ever got there. “I don’t want to go anymore,” he said, shaking his head, before describing the abysmal wages he gets at his job harvesting palm oil with a machete.

One Honduran official working in the migration office at the Guatemalan border indicated that efforts to better equip border police forces have, in one sense, been working: “There’ve been caravans,” they told The Nation inside the immigration office, having requested anonymity to be able to comment. “But they aren’t succeeding. The border police on both sides have been increasingly capable of stopping them. There hasn’t even been one since January.”

In a country already militarized to the hilt, security forces still show an outsized presence near the northwestern, US-facing border. At a highway checkpoint close to the Guatemalan border manned by the PMOP—Policía Militar del Órden Público, an elite military police unit notorious for accusations of extrajudicial killings—four lean, hard-faced men, M-16s slung over their shoulders, randomly stopped vehicles passing by on the road. When The Nation approached them, the soldier speaking was reluctant to say much about their job, answering in short, one-word responses. According to an indictment issued by US prosecutors in New York in March 2021, President Hernández offered to deploy Honduran troops to protect a cocaine lab close to Puerto Cortes, a city 10 minutes by car from where The Nation spoke to the soldiers.

“We’re here for drugs,” he said—not migrants. Backing away uneasily, he rejoined his comrades as they forced several young men out of a sedan pulled over on the roadside and proceeded to search their car.

The Biden administration’s broader push to stem migrant flows isn’t just military: Since January, the US government has played over 28,000 radio messages in multiple languages throughout the region seeking to dissuade migrants from coming to the United States. “Don’t put your kids’ lives at risk,” a sober Spanish voice says on an audio clip, as sad piano music plays in the background.

“There’s a lot of risk here on the street,” Otoniel says, his wife leaning on the filthy blue stroller for their youngest, 3-year-old daughter. Chamelecón, the poor neighborhood where they lived before the storms, just 50 yards below the bridge, is one of the most violent and insecure in San Pedro Sula, where police conduct bloody raids and gangs battle with military-grade weapons. “Anything can happen on the streets.”

“Our kids are out there and could get influenced by the gangs,” Medina adds angrily.

“Hondurans pay [too] little attention to the geopolitics of immigration to care what the government is doing,” Frank-Vitale says. The real reason they leave is utter deprivation.

Otoniel and his partner, for now, are too afraid to try taking their kids north. “It’s really difficult to get out,” he says, “and we don’t think we’d be able to make it. We don’t have much money, and it’s too dangerous. The gangs kill you on the way.” The weight of his predicament contorts his face with worry, and he furrows his brow, resting his jaw into one of his palms as the jerk-and-pull of traffic heaves past. He looks out at the dimming, blue evening landscape of San Pedro Sula, a city touted for years as one of the most violent in the world. “We’re in God’s hands now,” he says.