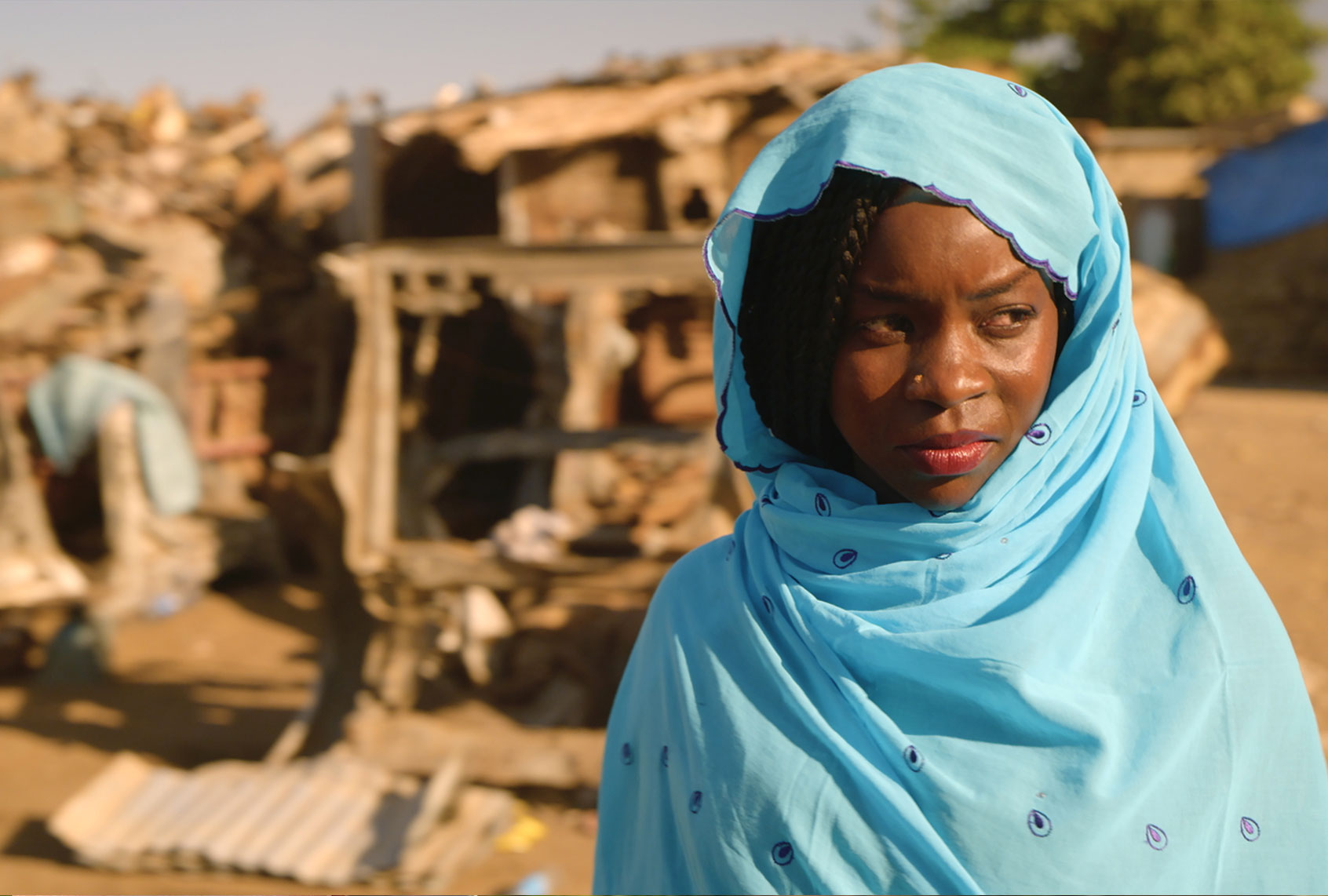 Mahamat-Saleh Haroun is a Chadian writer/director who makes exceptional dramas. They may be deceptively simple stories, but the emotions run deep. His latest film, “Lingui,” which premiered at Cannes and next screens at the Toronto International Film Festival, is his first feature with a female protagonist. Amina (Achouackh Abakar, who appeared in Haroun’s “Grigris”) is a single mother whose 15-year-old daughter, Maria (Rihane Khalil Alio), is pregnant and wants an abortion. Amina, who is a devout Muslim, is shocked by this double reveal, however, she proceeds to investigate Maria’s options to help her daughter.

“Lingui” never plays Amina and Maria’s story for melodrama; it is quietly empowering as the women find ways of circumnavigating the patriarchy. (A subplot involves the topic of female genital mutilation). Haroun’s talent as a filmmaker — he makes documentaries in addition to features — is to present life simply. His images are spare, artfully composed frames; he uses color, light, and shadow to create emotion. Among the many striking and hypnotic sequences in “Lingui” include a scene of Maria, dressed in white, entering a lake, or Amina and Maria racing through a maze of walls and buildings after an angry confrontation.

The filmmaker spoke via Whatsapp with Salon about “Lingui,” women’s rights in Chad, and his distinctive style of cinema.

This is your first feature film with a female protagonist. What prompted you to tell a “woman’s story” or work from a woman’s point of view?

When I was a kid, I grew up with my grandmother. I was the eldest in the family and I was always with my mother. I have a lot of aunts and I have four sisters. I am used to being around women, so I understand their problems well. I’m sensitive to their conditions. When I started to tell this story, I read a lot of articles in local newspapers about abandoned newborn babies — sometimes killed or thrown in toilets — and it becomes commonplace. Even 10 days ago, we had an article in the paper about this. I started thinking about this situation, and I had to tell this story.

“Lingui” addresses topics ranging from abortion to female genital mutilation, and rape. What can you say about the attitudes in Chad regarding these issues, and what risks you take as a filmmaker to present them?

As a filmmaker — and maybe the only one in Chad — you have to face this problem. I became, step by step, a spokesman. I have to talk about these stories, even if it is difficult or dangerous. It’s a kind of a duty. I made “Lingui” because in Chad, rape is very common, and people always say it’s the woman’s fault. Everywhere in the world people say that if a woman had been raped, it is her problem. If you are a victim of rape, it’s your fault. It’s a common way to talk about this problem. You have to be educated about it. I tried to reveal these problems to Chadian people. I’m happy that after the screening in Cannes we had a lot of debate on social media about this subject. It’s huge, because they know the problem is there. I had to make the film.

The solution to female circumcision that I am providing in the film — women can organize something like that. They can organize the circumcision without doing it. It is a way of resistance without the shouting. There is a sorority. This film is a tribute to all these women in Chad. They really try to resolve problems without saying anything because they are dominated by the patriarchy. I discussed these subjects with many women. They know about it and cannot speak about it. If you say you are a victim of rape or something like that, you get blacklisted as a “bad woman.” I’m happy that I had a lot of reaction from women’s associations in Chad. They are very happy that someone talked about these topics, which are a daily problem for them. I am happy to be on the side of these women.

What decisions did you make in terms of creating the characters and their arcs?

Amina belonged to a middle class, well-educated family, but they threw her out when she got pregnant. Her father banished her, and she has been marginalized. She lives in a poor corner [of the city], and she tries to get Maria a good education. That’s her challenge, and the duty of her life. In contrast, Amina’s sister Fanta (Briya Gomdigue) is married and well educated. I [deleted] scenes of Fanta showing her wealth. If Amina had not [become pregnant] she could be in the same situation. This injustice is against women, always. They become a pariah, and victims of predators.

I don’t have the means to organize casting of 100 people. I see people in the street or my neighbors, and people I know. It if works, that’s good. I have to find the right person without having really a lot of people to choose from. It is difficult. When you are in my situation, working with non-professional actors, you have to rely only on your feelings. I see people, and it’s just a question of feeling. You feel them, or you don’t feel them. Achouackh Abakar, who played Amina, convinced me. She is a mother with two kids. I believe that if she had not been a mother, it wouldn’t have been possible for me to cast her in this role. It was just that she was the right person for me. We did some rehearsals. For Maria, Rihane Khalil Alio was the only person saw. I said let’s do it. I felt something. I discovered we have the same birthday. She is so intelligent. I think that you can’t have good actors if they are not intelligent. She understood the subject. I just had to manage and direct them the right way.

Your film is squarely on the side of these women. This story could be played as melodrama, but it is really empowering. What observations do you have about the patriarchal culture in Chad that has men dictating what women should do with their bodies?

I didn’t want to make a melodrama or show the women as victims. I wanted to build a story around two women heroes of daily life in Chad. They live this situation; they know it. They face these problems every day and they know people who face this same situation. It’s their reality. I started thinking and working with them and talking with women and seeing examples that helped us to make the film this way. I’m happy the film works well for audiences. We had an 18-minute standing ovation in Cannes and received great reviews. This is the situation in Chad. I want to stop it. If cinema can stop this situation, that would be great. I made the film so the problem can be discussed and solved.

The film’s depiction of religion is really interesting. Amina’s relationship with her Imam shows her loyalties. There is a discussion of prayer erasing sin. Do you think your film has the power to change how folks think about religion?

Religion in the film is a dominating way of telling people what they have to do. Amina makes a choice of love to save her daughter without stopping her religious beliefs. She stops believing that she has to respect everything religion dictates, or that she has to give religion up completely. She develops free thought. It’s a journey to the light. The story starts in a tunnel and she tries finds the light. It’s a trip to emancipation. She becomes responsible, and religion is not going to be responsible. If she wants to resolve her problem, she had to take her own responsibility. “Lingui” means this precept of “leave it together.” If you belong to community, you need to help each other.

Your films have a wonderful economy of style. Can you describe your visual approach to storytelling?

The form dictates the style. You can’t have the form if you don’t have content. I wanted to convey that time is always running. They have to get this abortion before it is too late. There was an urgency. In her head, time was always running, and I wanted to be in her head all the time. She is trying to find a way.

You had hoped to start a film school in Chad. What observations do you have about African cinema these days?

I would like to see more filmmakers, but we need a big group of 10 or 15 people and really strong filmmakers to change the history of African cinema. I’m always expecting the upcoming filmmakers. We have the Kenyan woman, [Wanuri Kahiu] who made “Rafiki,” and Mati Diop. I hope we see more young filmmakers. We start making features when we are 35, 40, and it’s difficult. I want them to start make features when they are 25, because when you start young, you can build an oevre and career. I’m optimistic. I believe that something is coming.