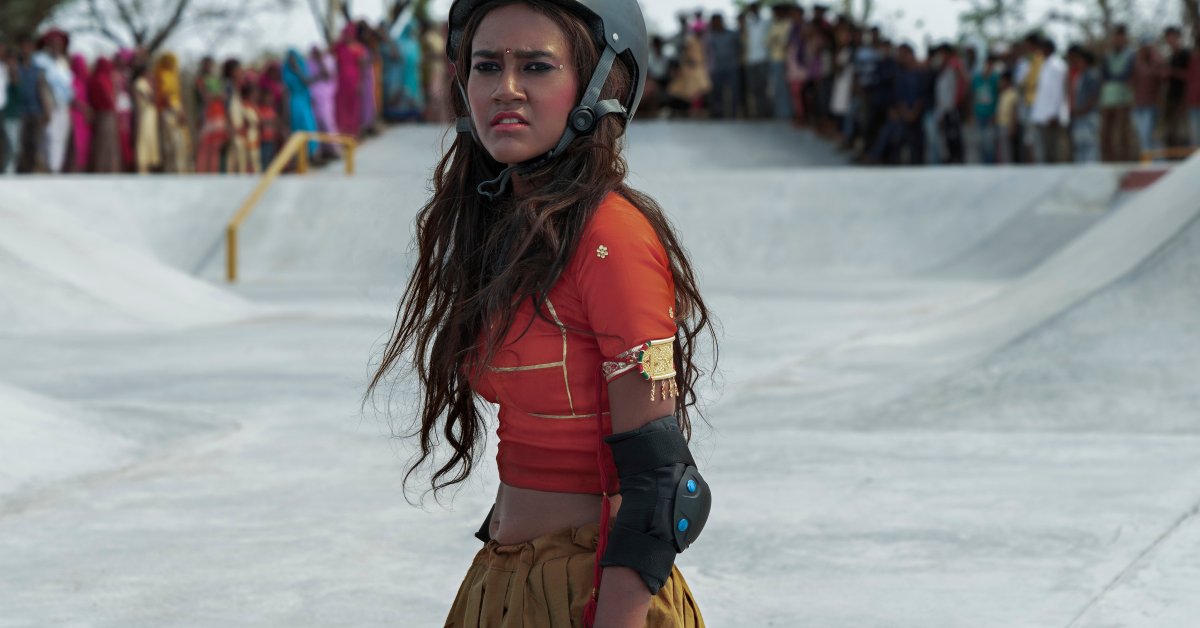 The assumption we should all live by, even if it’s sustainable only in a perfect world, is that women everywhere want the best for women everywhere. We want to be free to love or marry whomever we choose, to be educated and to pursue any career we wish, to be able to move about as freely as men do. But there are women in the world who, for reasons of culture, religion or tradition, don’t have those freedoms available to them—or don’t want them. Is it wrong for an outsider to point them toward another possible path? Or is it a moral duty?

Those are questions that writer-director Manjari Makijany weaves deftly into her tender and exhilarating debut feature Skater Girl, set in a rural village in Rajasthan where boys, it seems, have all the advantages. In the movie’s gorgeously shot, wordless opening, a teenage girl escorts her little brother to school by pulling him along on a rough wooden board fitted with wheels. It’s what he calls a “bearing cart,” and he loves it—like so many little boys everywhere, he adores anything with wheels. Though it’s clear that the girl adores her brother, we can also see the disappointment on her face, clouding it like a sunset shadow, when she drops him off at the schoolhouse. He’s going inside, but she isn’t; she’s needed to help her father, who’s struggling to support his family, bring peanuts to market. When she’s not doing that, she’s helping her mother at home.

This girl, Prerna (played by marvelous newcomer Rachel Saanchita Gupta), does get to return to school—but it’s been so long that the uniform she’s required to wear no longer fits her, and she can’t afford to buy the required textbook. Her future seems foreordained. We’ll learn that her father hopes to marry her off soon, even though she can’t be more than 14 or 15, and at one point she mentions a friend her age who already has a child. But something shifts for Prerna when she meets Jessica (Amy Maghera), a poised and sophisticated young advertising executive who’s visiting the village from London. Jessica’s late father was born in the village; she’s hoping to forge some connection with him by seeing his birthplace. Prerna meets Jessica when her little brother, Ankush (played by a little firecracker of an actor, Shafin Patel), accidentally pelts the young woman with a clot of mud during a fight with one of his classmates. Prerna steps in to help Jessica clean up, leading her to the water pump she’s allowed to use (the first one they pass is reserved for members of the higher castes). Jessica, responding to Prerna’s shy eagerness, begins to ask, in Hindi, questions the girl can’t, or won’t, answer: How old is she? What grade is she in? Before long, she learns that Prerna can’t go to school because she doesn’t have the proper uniform.

Jessica is elegant and worldly, but she’s also conscientious and kind, and she forges a friendship with Prerna and the other village kids, who cluster around her with clamorous curiosity. Then she reconnects with an old friend who happens to be teaching in the village, a skateboard-riding hippie guy from California named Erick (Jonathan Readwin). The kids—mostly the boys, because, well, boys and wheels—are captivated by his skateboard. But even though Prerna is at first too nervous even to step on it, she almost immediately falls in love with the gliding rush of freedom it affords her. Jessica sees what’s happening and impulsively outfits all of the kids, including Prerna, with skateboards. Eventually, after the village authorities start complaining loudly about children zipping around everywhere willy-nilly, she and Erick undertake the arduous task of building them a skatepark, the first anywhere in the area.

Though Skater Girl may give the illusion of telling one seemingly simple story, Makijany—who cowrote the script with her sister, Vinati Makijany—is really weaving many stories into one. The village grownups are used to doing things a certain way, and skateboarding—kids having fun!—hardly figures in their rigid plan of how life should be lived. (At one point they institute a 500-rupee fine for anyone caught skateboarding; the kids take a page from their school lessons and stage a Gandhi-style nonviolent protest.) The town authorities remind Jessica sternly that, even though she has Indian parentage herself, she’s still an outsider—and they’re not wrong. Is she right to impose her values on these kids, and to nurture hopes in them that may ultimately have no outlet? Skater Girl is very clear about that conflict: any outsider’s desire to help, no matter how well meaning, can also be a form of condescension.

Should girls go to school when their families have other plans for them? How much does the caste system matter in the modern age, especially when it lives on through unspoken rules? When mothers want more for their daughters, are they always able to push back against husbands who might be domineering or controlling? Makijany, who is from Mumbai, at least touches on all of these questions, even as she seems to know it’s not for her to provide hard and fast answers. (It’s worth noting that the skate park constructed for the film is a real one, built by a team of Indian and international volunteers, and it remains free for the public to use.)

Sign up for More to the Story, TIME’s weekly entertainment newsletter, to get the context you need for the pop culture you love.

But if Makijany can’t give us answers, she does give us Prerna and her unspoken wishes—her longing to go to school, her crush on a sweet classmate who is above her caste and thus out of her league, and, most significantly, her love for the freedom of the skateboard, a metaphor that almost literally takes flight. Skater Girl belongs to Rachel Saanchita Gupta—her face is the movie’s heartbeat. Prerna almost doesn’t step onto that skateboard in the first place: Gupta’s face shows us dozens of criss-crossing emotions, from fear of humiliation to a vague certainty that just isn’t the sort of thing a girl should be doing. But by the movie’s end, she has become a master of the board’s secrets, and she’s vibrating with so much joy that it’s visible right to the very ends of her hair, streaming and swirling around her. Skater Girl doesn’t give Prerna a definitive happy ending, but the movie ends on a note of wary optimism. That’s only fitting, because ultimately, Prerna and girls like her will need to write the story of their lives for themselves. But that doesn’t preclude the option of accepting some help, when it’s offered, along the way.

Contact us at Skater Girl, a Shy Indian Teenager Takes Flight on a Board with Wheels&body=https%3A%2F%2Ftime.com%2F6072805%2Fskater-girl-review-netflix%2F” rel=”noopener noreferrer” target=”_self”>letters@time.com.