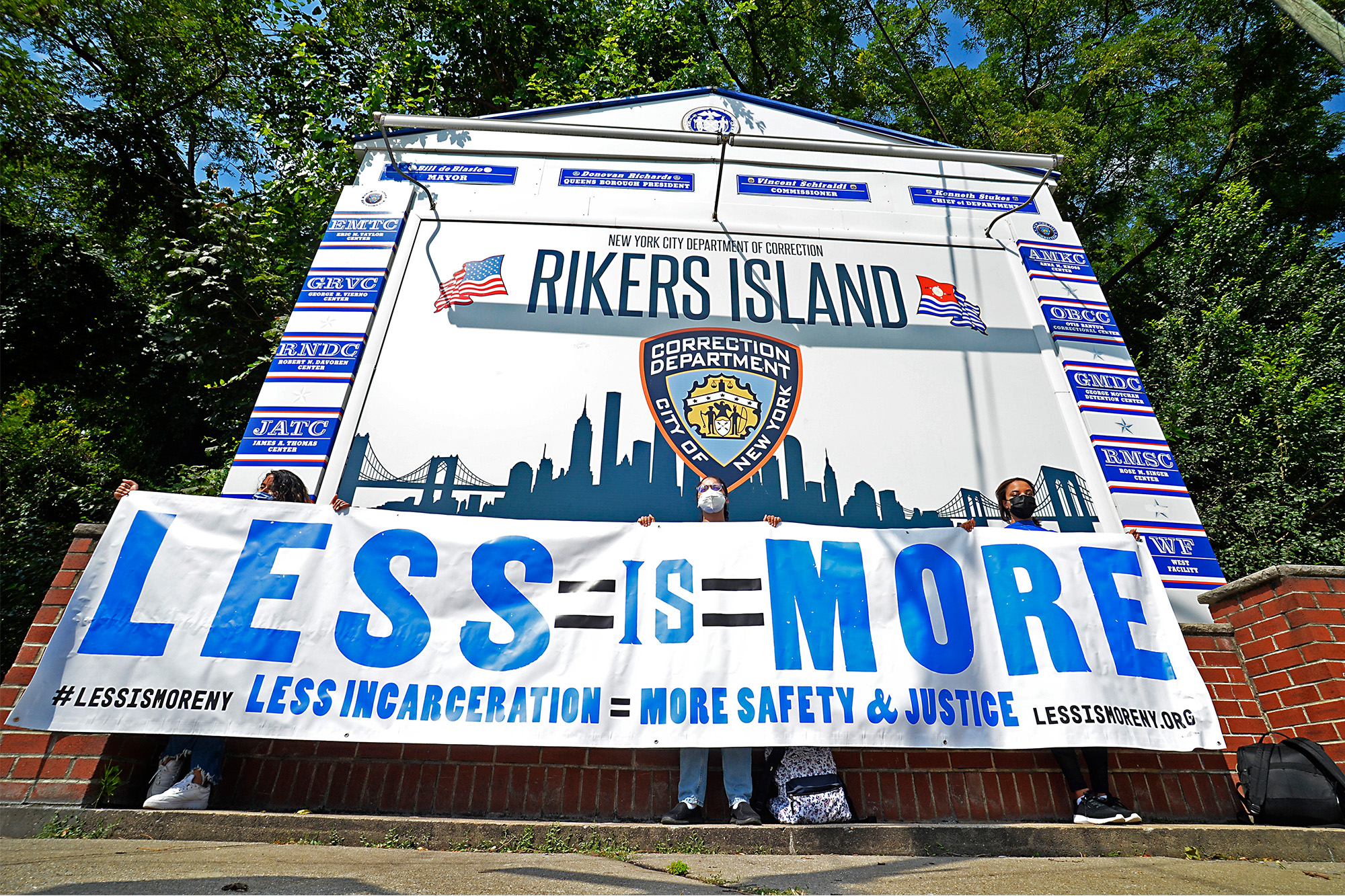 A Rikers Island inmate attempted to hang himself in front of two state Assembly members Monday during a chaotic tour of the out-of-control lockup.

Assemblymember Jessica Gonzalez-Rojas (D-Queens), who visited Rikers Island Monday morning alongside more than a dozen state and local elected officials, was inside the punitive segregation unit at the packed Otis Bantum Correctional Center when a man attempted to hang himself in front of her and state Senator Jessica Ramos (D-Queens).

“We were in the intake area, which is completely overrun and completely crowded, stepping over pools of piss,” Gonzalez-Rojas recalled after the visit.

“A man called me over and pointed to someone who jumped up on the bars and tried to use a bedsheet to kill themselves … I called a guard over. I think [the inmate] was OK.”

It the inmate’s identity and severity of any injury from the hanging incident were not immediately known.

Following a series of news reports exposing dangerous and chaotic conditions inside of the jail, four state senators, seven assembly members, Public Advocate Jumaane Williams and Councilmember Brad Lander showed up at the jail Monday to see Rikers for themselves.

The politicians are fighting for inmates to be freed from the “inhumane,” “dangerous and illegal conditions” plaguing Rikers Island that uniformed officers maintain wouldn’t exist if the lockup was better staffed.

The elected officials described putrid conditions where feces and rotting food carpet the floors, a dozen men are packed into a single cell and inmates with chronic health conditions are not seen by doctors.

Following the tour, State Senator Alessandra Biaggi (D-Bronx) said there are people covered in Clorox bleach confined to small spaces without windows, inmates coughing up blood inside their cells and an HIV-positive charge who has not been given his medication for days.

“It was hellish,” she said.

“Control matters in a jail, but there is no control. There’s no safety.

“There were people being kept in showers instead of cells because a lot of the cells are broken.”

The elected official said at one point, she feared for her safety when she was mobbed by a horde of inmates desperate for better living standards.

“Inmates were coming from both sides and at first they approached one by one but then the screaming started, they came closer and everyone’s upset because they don’t have enough food and the water is served in a 2.5 ounce cup of water,” she recalled.

Ramos called the conditions “deplorable” and said charges are being “denied food for days” and some have gone more than a week without medical attention.

“These men are desperate for simple medical attention, as simple as measuring their sugar to figure out whether their diabetes is under control or not…. those who need to access the methadone clinic haven’t been able to do so,” she said.

“There is all sorts of gunk on the floors everywhere from dead cockroaches to fecal matter to food sitting there rotting for a long time.

“It’s all because the incarcerated men and women on that island are being treated unfairly and the corrections officers are working under very deplorable conditions themselves.”

She said “we must be kidding ourselves” if the public expects inmates to endure such conditions on Rikers Island and then “reintegrate themselves into society in a productive way.”

“Starvation, torture, violence, no medical treatment for physical or mental health, is not a recipe for rehabilitation or safety. It is a recipe for violence and continued violence on our streets,” Ramos said.

“We are never going to get crime under wraps out here if we don’t control what’s going on in there.”

The politicians went to Rikers to demand newly-minted Gov. Kathy Hochul sign the “Less Is More Act” to free inmates who are behind bars for technical parole violations like being late to an appointment with a parole officer or eating at a restaurant that serves alcohol. The bill passed both the assembly and the senate before the close of the legislative session but still needs Hochul’s signature.

Following speeches from more than a dozen elected officials outside the jail’s gates, the president of the Correction Officers’ Benevolent Association Benny Boscio Jr. interrupted the press conference to demand more officers, not fewer inmates.

“Eleven shootings a day, babies getting shot in Times Square, and they want to release more prisoners?”

Boscio said the staffing crisis at the jail is allowing inmates to go unsupervised for hours on end and creating a dangerous situation for officers because they are frequently outnumbered with little back-up.

“If we don’t have the resources we need here, that’s why everyone behind the gates is suffering,” Boscio said.

“Yes inmates are suffering, because corrections officers are suffering through 25-hour straight shifts with no meal breaks…. Assaults on my members are through the roof,” he continued.

“There hasn’t been a corrections officer hired in close to three years and since January 2019, there has been more than 1,300 resignations not accounting for retirees.”

The Department of Corrections didn’t immediately return a request for comment.