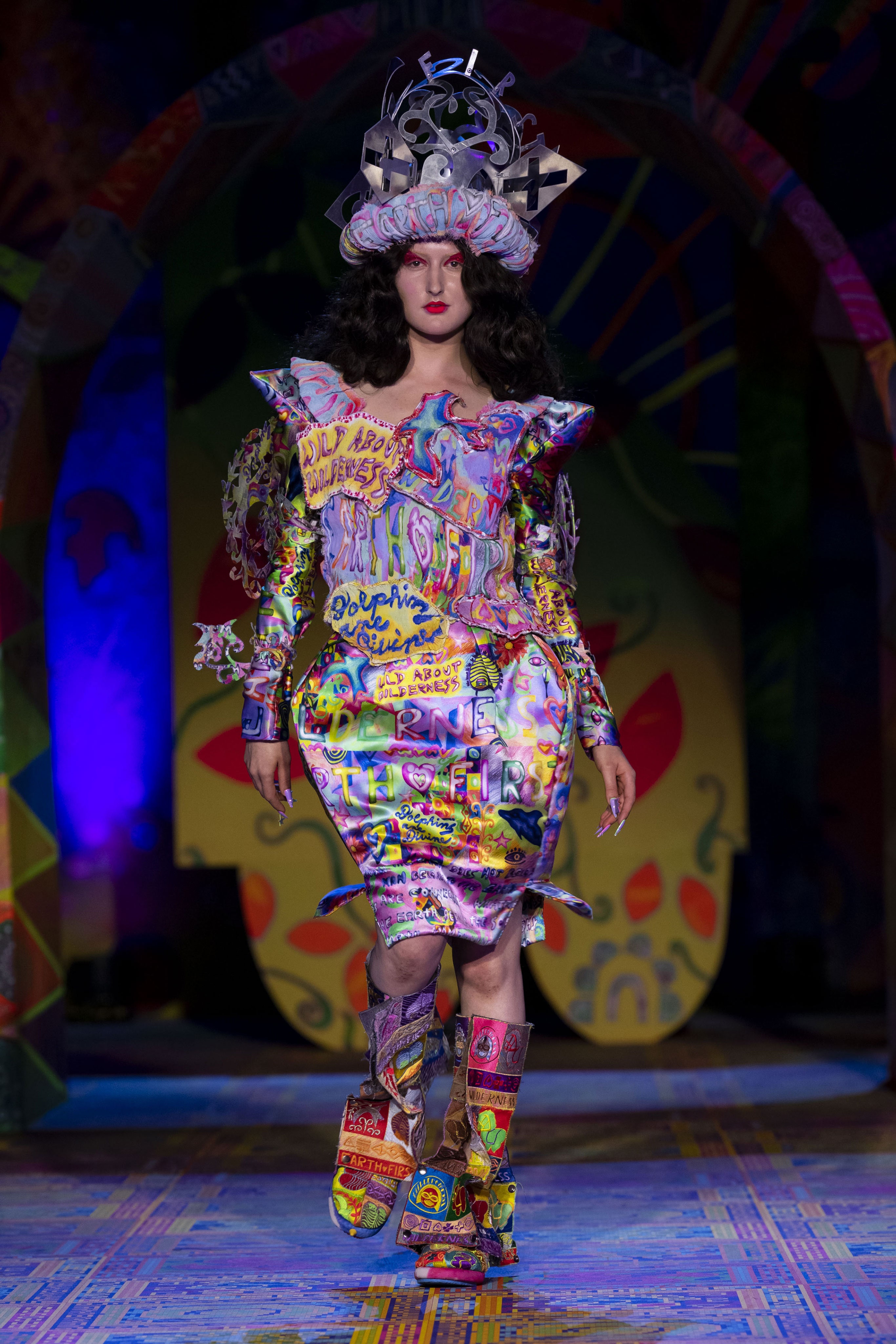 Jordan Gogos’s cacophonous, technicolor runway-as-party was as good an introduction to the designer’s world as possible. The Parson’s graduate’s sophomore presentation took his work up several notches, with production values to match. A set of monumental proportions, every inch covered in dayglo art, and a high BPM soundtrack backed the procession of wildly imaginative forms, or ‘wearables’ as he calls his clothes, on a melting pot of personalities. Friends and collaborators and Australian fashion icons were enlisted as models. Artist and designer Jenny Kee of Flamingo Park fame walked in reworked versions of her own creations.

With the backing of one of Sydney’s major museums, the Powerhouse, Gogos has been able to polish his raw talent. Chosen for the Powerhouse’s designer residency program, he finds himself at the center of a cultural institution without having commercialized his first collection. “I can’t believe in less than a year, we’re in a museum,” he said, alluding to his circumventing of the traditional fashion path and his break, Trojan horse-like, into the industry. His message: in a year he is inside the castle. “We’ve overtaken,” he said.

That horse has become a motif, appearing here on prints, bags, and resin coins the size of dinner plates made by local creative Anna Pogossova. In a lineup of inventive silhouettes, including petal-like peplums framing hips, panniers in fabric felted from scratch, virago sleeves, elaborate millinery, and one confection that served as a wearable vase for live and faux flowers, each creation outdid the next. Though there’s a craft feel, jaw-dropping amounts of work and detail go into each piece. One patchworked hat alone has 1.8 million stitches in it, taking weeks to sew. “We went through 85 needles in one day,” Gogos said.

The layers here are dizzying, and to achieve them he racked up 60 collaborators, among them the indigenous art center Pormpuraaw. It’s entirely intentional on Gogos’s part. “I do want people to start being a bit more critically engaged in what’s existing around us. I don’t want them to look at a piece straightaway and go, ‘I absolutely understand that piece of art.’”

It’s part of an agitation for a renewal of Australian creativity, one based on communal creation, not competition, and questioning ideas around authorship in the pursuit of making something original. Inviting established labels like Albus Lumen or Youkhana to take part in this collection, he sees himself as the person who unpicks existing ideas, rethreading them into his brand to unleash a new feeling. In the Iliad, a gargantuan horse was offered to bypass the gatekeepers. Here the subterfuge is unapologetic, a dazzling phantasmagoria forged through connection. To the whoops and cheers of showgoers enjoying the spectacle, he’s rushed the walls and getting comfortable.