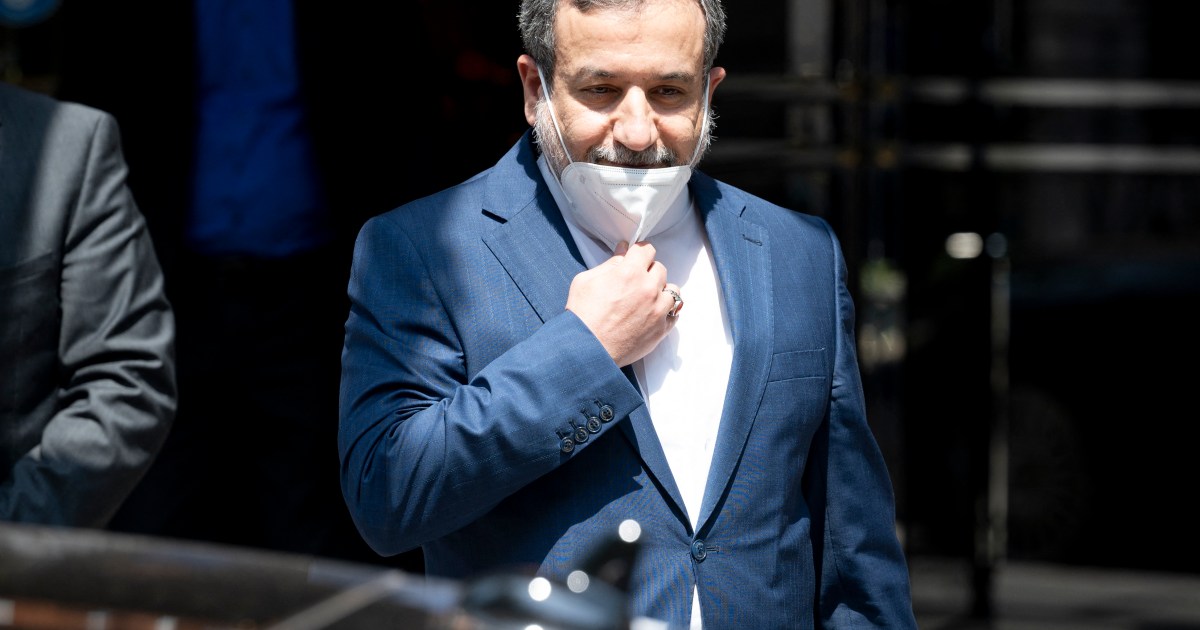 Tehran says it wants to agree prisoner exchange but the US and UK are linking it to talks on Iran’s nuclear programme.

Tehran, Iran – Iran’s top nuclear negotiator has accused the United States and the United Kingdom of holding prisoner exchange talks “hostage” after Iran said nuclear talks should be delayed until after its new government comes into office.

Deputy foreign minister Abbas Araghchi said Iran is preparing for a transfer of power to the incoming administration of Ebrahim Raisi in early August, and therefore months-long talks in Vienna to restore the country’s 2015 nuclear deal with world powers must wait.

“US and UK need to understand this and stop linking a humanitarian exchange – ready to be implemented – with the JCPOA,” he tweeted on Saturday, using the formal name of the landmark accord, the Joint Comprehensive Plan of Action.

“Keeping such an exchange hostage to political alms achieves neither,” he said, adding that 10 prisoners on all sides could be released tomorrow if the other parties do their part.

US State Department spokesman Ned Price said later on Saturday that the comments were “an outrageous effort to deflect blame from the current impasse”.

“We stand ready to return to Vienna to complete work on a mutual return to the JCPOA once Iran has made the necessary decisions,” Price said, as reported by the Reuters news agency.

“With respect to the comments on the Americans whom Iran has unjustly held against their will, we see just another cruel effort to raise the hopes of their families … There is no agreed deal yet,” he said.

There was no immediate comment from the UK government.

Iran and the US have acknowledged for months that they are engaging in indirect talks – facilitated by Switzerland – to finalise an exchange of prisoners. Both sides said last week the talks have progressed.

The two countries have conducted prisoner exchanges twice in the past, once in January 2016 when the nuclear deal was implemented, and once in December 2019.

Like the nuclear talks, it appears now that the prisoner exchange is also being deferred until after the ultraconservative Raisi assumes office.

While diplomats had initially expressed hope that the JCPOA could be restored by the sixth anniversary of its signing on July 14, a report Iranian Foreign Minister Mohammad Javad Zarif wrote to parliament last week confirmed that Raisi is hoped to “complete” the process that started in May.

Zarif said most of the sanctions the US has imposed on Iran since 2018 – when it unilaterally abandoned the JCPOA – will be lifted if an agreement is reached in Vienna. But steps Iran has taken to advance its nuclear programme, including enriching uranium to higher than 60 percent and producing uranium metal, have also complicated the negotiations.

The Vienna talks are likely to be continued in the second half of August, but it remains to be seen how political differences in Tehran evolve until then. In addition to affecting the timeline, Raisi’s team has already had a direct effect on the progression of the talks as he has appointed two members to a newly-formed “adaptation committee” that is tasked with reviewing progress.

Those members are security official Ali Hosseini-Tash and former nuclear negotiator Ali Bagheri Kani, both of whom are thought to be potential candidates for replacing veteran diplomat Zarif as foreign minister.

The committee is also reportedly comprised of Araghchi; Ali Shamkhani, the secretary of Iran’s Supreme National Security Council; Ali Salehi, the head of the Atomic Energy Organization of Iran; and two legislators.