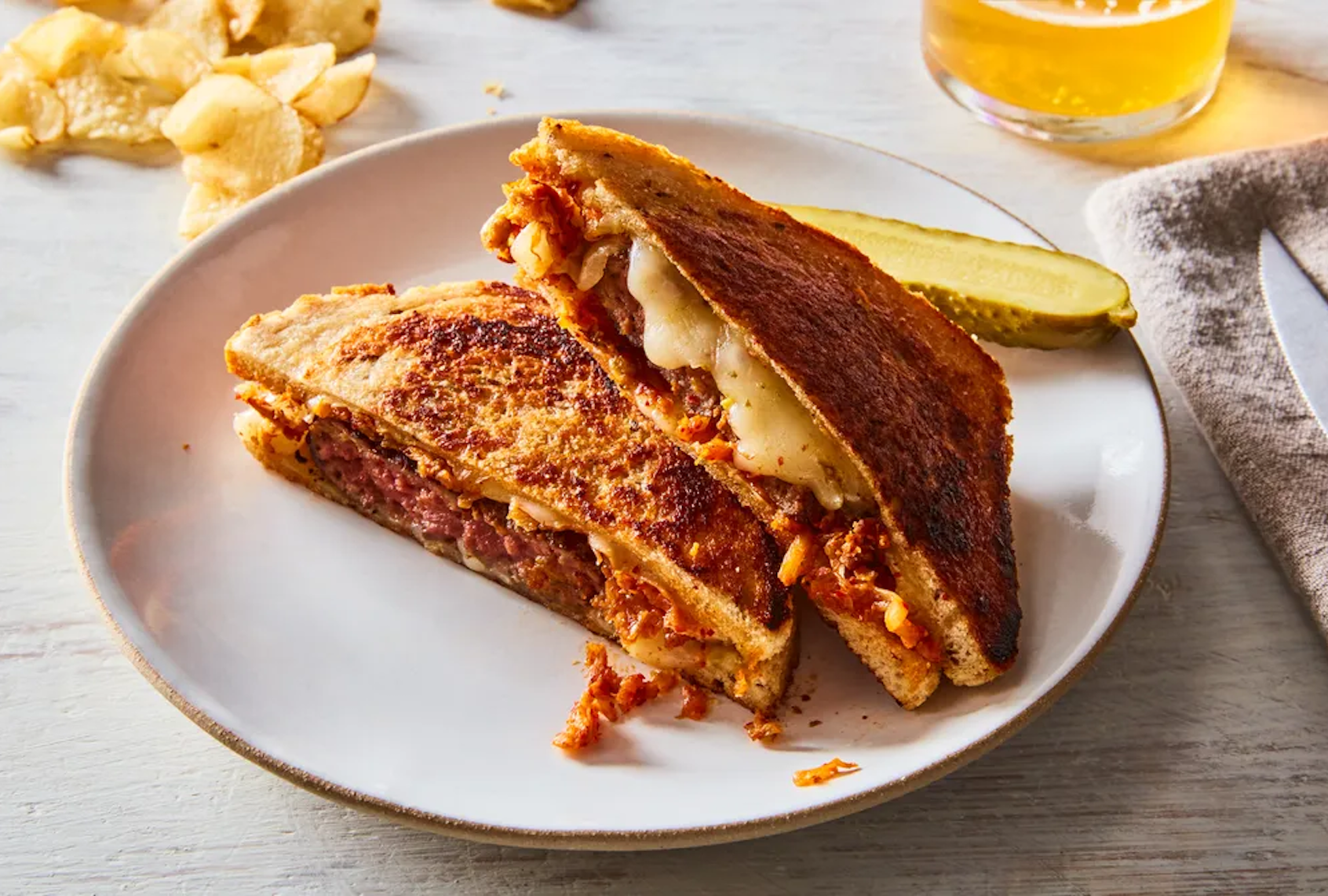 I’ve realized that the population of my Brooklyn neighborhood, where I’ve lived for a decade, can be divided into buffalo chicken salad people and patty melt people. I put myself in the latter category. One of my favorites was the patty melt they served at beloved local spot MeMe’s Diner, which closed its doors in 2020 but has been reborn as K.I.T., a natural-wine spot that also sells excellent baked goods.

But here’s the question: Is the patty melt a sandwich or a hamburger? Because if it’s a burger, then we enter a minefield of issues that people just love to debate when it comes to things you can grill in the summertime and put between a bun.

“I’m not a philosopher,” Libby Willis, owner of K.I.T., says when I ask her how she’d categorize the melt. “And I do think it’s a philosophy question.”

While I don’t disagree with Willis, I feel confident saying that, yes, a patty melt is a sandwich. It comes between two slices of bread and not a bun. In my opinion, it’s a sandwich in the same way a grilled cheese or a tuna melt is a sandwich. The hamburger patty is invited to the bread’s party, and thus gives up any right to be defined as anything other than a sandwich.

Yet there was something about the patty melt Willis served at MeMe’s (and that she sometimes brings back for the die-hards at K.I.T.) that really got me thinking deeper about the patty melt and why it stands out as a perfect beef sandwich to me, a person who is super picky about a slab of red meat between bread. If you’re going to recommend a Reuben or corned beef sandwich to me somewhere, you’d best hope it stands up. I’ve had more than my share of bad smoked-meat sandwiches, and I just don’t have the cholesterol to spare.

The patty melt, on the other hand, is a little less difficult to screw up. Why? You take the bread and “fry it in butter and put American cheese on it,” just like Willis says. Add your beef and some caramelized onions, and that’s pretty much it. Super simple. Beyond the beef, it has three things that bring most everybody joy: fried, butter-soaked carbs; onions that look like they stayed on the beach too long; and beautiful, processed-to-the-moon-and-back yellow American cheese. It’s the most “If this is wrong, I don’t want to be right” type of meal there is. Willis puts comeback sauce on hers, but if you want just ketchup or just mayo or ketchup and mayo, you do you. I personally don’t think it needs any of that, but to each their own.

There is also something undeniably classic about the patty melt, which supposedly originated at the California-based chain Tiny Naylor’s at some point in the middle of the 20th century. It has the feel of a big American idea, born out of earnest ambition. It was a way to stand out, but also something Tiny Naylor’s wanted people to enjoy. And there seems to be some thought put into the sandwich — not just a bunch of things plopped together.

Willis certainly believed in it. When she was opening MeMe’s with her old partners, there was a lot of testing, going to diners, and finally making her own. “There was a lot of trial and error, like, how do we put the condiments on it, and what are the condiments? And it was clear that it was all of the condiments mixed into one.” She also knew what she didn’t want: lettuce and tomato. “I don’t want those anywhere near my patty melt. The bread is hot. You’re not supposed to put cold things on it.”

It all comes back to the bread. Maybe that’s what drew me to the MeMe’s patty melt in the first place. This will probably upend my argument that the patty melt is a sandwich, but the first time I tried it, I was instantly brought back to a place we used to go to on special occasions when I was a kid, called Hackney’s. Known for two things, its French-fried onion loaf and its Chicagoland-famous Hackneyburger, Hackney’s was always ahead of the fancy-burger curve. It was a nice burger restaurant in a sea of fast food choices, and the only place I remember as a kid where you sat down to order a burger with a white napkin in your lap. Today, that’s normal, but in 1989? I don’t think it was as much of a thing. And while the patty held its own, the thing that really wowed people in those more innocent times was that they served it between two slices of rye bread.

Now, bringing it all back to the sandwich vs. burger debate, I’ll conclude that I believe it’s all about intention. If you make a patty with the intention of serving it like a burger, with tomato and sliced onions and lettuce, then it’s a burger. But the patty melt is not that. And the one Willis makes is extra special because she goes out of her way to locate seedless (very important since the bread is fried) marbled rye, and there aren’t many places that do that for some reason or another. So on the rare occasion K.I.T. brings this famous sandwich out of retirement, it’s a real event for me and the other patty-meltheads in my part of Brooklyn. It’s a special occasion patty melt. And, really, while I’m a fan of nearly anything between two slices of bread, nothing beats a special occasion sandwich.