Is Blue Balls Real? Kinda, But You’ll Be Okay. We Promise. 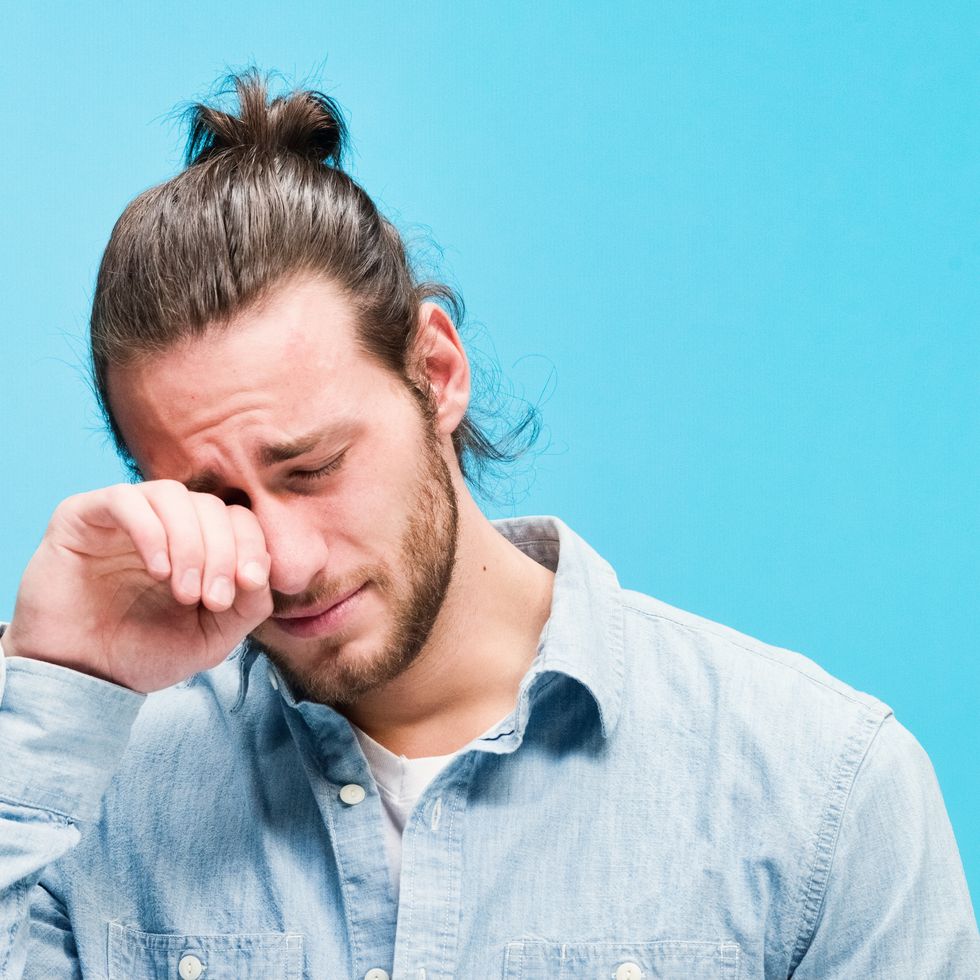 Since the dawn of time, men have used the term “blue balls” as a euphemism for general sexual frustration. But if you’ve ever felt an aching sensation down there—or even noticed your testicles turning a darker shade—you know it’s not just an excuse to get off. Blue balls can be something that actually affects you physically, too—and it (sorta) hurts.

Anecdotal symptoms of blue balls include testicular pain, an aching sensation at the base of your penis, heaviness, and a faint blue tint to your testicles. But is “blue balls” actually real, or are those symptoms psychosomatic? And for that matter, is it harmful?

“Neither blue balls nor pink pelvis (the female-bodied equivalent) is dangerous or bad for you,” says Gigi Engle, ACS, certified sexologist and author of All The F*cking Mistakes: a guide to sex, love, and life. “The myth that blue balls is somehow dangerous or super painful is born out of the idea that men need to ‘release their ejaculate, which is a myth designed to pressure women into sex.'”

Historically, society has talked about blue balls in a problematic way.

You might have heard it in a movie or from a buddy at some point: “She gave me blue balls!” Men have long complained about blue balls as a means of pressuring women into sex, Engle explains. “A guy will pretend he’s in pain and appeal to a woman’s sympathy in order to get what they want,” she says. “It’s manipulative, wrong, and it’s definitely a form of coercive assault to use blue balls to pressure someone to perform a sexual act they don’t want to do.”

Remember, you need enthusiastic consent—i.e., a “HELL YES!”—to proceed with any sexual interaction. Guilting someone into a hookup by telling them you have blue balls, as though it’s some kind of dangerous medical condition? Nope. Not gonna cut it.

So is blue balls real or what?

Let’s get one thing clear right off the bat: While “blue balls” is a relatively common phenomenon, that fleeting testicular pain is not going to do any long-term damage. If you’re having sex and your orgasm is interrupted, you might be uncomfortable for a few minutes (or even hours), but that’s pretty much the whole extent of it.

Initially, there wasn’t a whole lot of research available on blue balls. We dug up one early case report published in the journal Pediatrics back in 2000, which detailed a 14-year-old boy who ended up in the ER with severe scrotal pain after “messing around” with his girlfriend without ejaculating. But the scientists admitted they weren’t quite sure what was responsible for causing the pain. That’s because, after reviewing the available literature in emergency medicine, urology textbooks, and medical libraries, the scientists were unable to find any mention of or official medical term for “blue balls.”

Now, we do have an official medical term for the unpleasant experience: epididymal hypertension.

“The condition is caused by excess blood remaining in the testicles from a wave of erections not followed by ejaculation,” explains Jamin Brahmbhatt, M.D., a urologist at Orlando Health. “During arousal blood starts to flow into the penis (ie: erection), testicles, and surrounding areas. When a man achieves orgasm/ejaculation the blood returns back to the body.”

Symptoms of epididymal hypertension “include pain, discomfort, aches, or a heavy sensation in or around the testicles,” Brahmbhatt says.

There’s also some evidence that prolonged sexual attraction, leading to a stiffy that won’t go down, can cause some of the oxygen in your blood to be absorbed by the tissue in your genitals. This can leave the blood with a blue-ish hue, says urologist Richard K. Lee, M.D., of Weill Cornell Medical College.

But Lee says this usually only happens when there’s some type of blockage. “Erectile dysfunction drugs or blood flow-constricting devices like a penis ring could cause this, but it’s not likely to occur naturally,” he adds. So unless you’ve been using Cialis or a new sex toy in the bedroom, your balls likely won’t actually become blue—you might just experience some mild discomfort.

Is there a cure for blue balls?

There is no research-based treatment for this condition, says Brahmbhatt. “Anecdotally, the quickest way to recovery appears to be ejaculation. Other ways discussed in forums include ice packs, avoiding erections, and then exercise of some sort.”

Only having an orgasm can relieve this pressure, says urologist Darius Paduch, M.D. (Note that he does not say “partnered” orgasm—if you want to finish, and your partner isn’t on board for whatever reason, go be a man and find a bathroom stall and a wad of Kleenex and take care of it yourself. Your partner doesn’t owe you anything—period.)

Some people have suggested that applying ice or cold water (hello, cold showers!) or working out can help relieve the pressure, but there isn’t a ton of research to support that. So for now, just stick to the old-fashioned way.

Should I ever see a doctor about blue balls?

If you’re experiencing blue balls for a prolonged period of time, odds are, it’s not blue balls, but a far more serious condition, Brahmbhatt says. The sensation (and associated pain) from blue balls is typically short-lived, and of course, should go away once you ejaculate.

Brahmbhatt has seen his fair share of men that come to the ER with testicular pain that has no clear etiology, and they think it’s likely blue balls. Some guys can easily admit to the problem, whereas others are in denial. “Regardless, these patients always get ruled out for more acute problems including epididymitis (infection or inflammation of the epididymal tubules), orchitis (infection or inflammation of the testicle), testicular torsion, referred pain from kidney stones, testicular cancer, or testicular trauma/injury.”