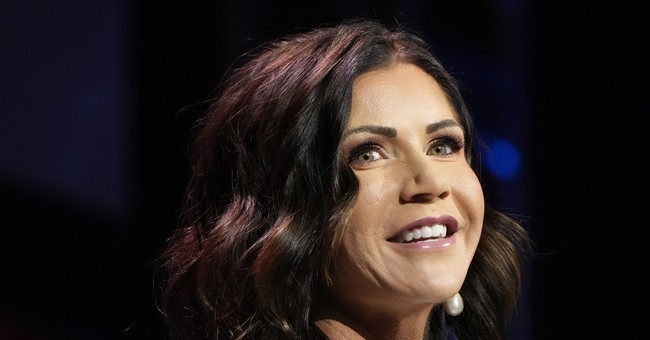 We pray for strength, wisdom, and courage and ask God to put a shroud of protection over the people of Florida and my good friend @RonDeSantisFL. Remember Psalm 55:22.

Noem’s Scriptural choice is interesting, not for any clumsy misinterpretation but rather the Psalm from which it comes. The verse she quoted reads as follows:

Give your burdens to the Lord,
and he will take care of you.
He will not permit the godly to slip and fall.

Appropriate, given the burdens of rescue and rebuilding DeSantis faces once Ian leaves the area. However, the Psalm itself is void of any warm fuzzies. Some highlights:

Listen to my prayer, O God.
Do not ignore my cry for help!
Please listen and answer me,
for I am overwhelmed by my troubles.
My enemies shout at me,
making loud and wicked threats.
They bring trouble on me
and angrily hunt me down.

Yes, but enough about the media.

Confuse them, Lord, and frustrate their plans,
for I see violence and conflict in the city.
Its walls are patrolled day and night against invaders,
but the real danger is wickedness within the city.
Everything is falling apart;
threats and cheating are rampant in the streets.

Yes, but enough about Washington DC.

Here’s where it gets most interesting.

It is not an enemy who taunts me—
I could bear that.
It is not my foes who so arrogantly insult me—
I could have hidden from them.
Instead, it is you—my equal,
my companion and close friend.
What good fellowship we once enjoyed
as we walked together to the house of God.

Now, if Noem had no intentions aside from the single verse she referenced, this means nothing. However, Noem is one sharp cookie. She could have selected any number of verses telling DeSantis to keep his chin up. Instead, she picked one from a Psalm in which the author (King David) finds himself surrounded by ne’er do-wells, including one who was formerly a close, supportive friend, leading to speculation regarding who this would be in relation to DeSantis. Hmm …

Former President Donald Trump and presidential hopeful Ron DeSantis are widely seen within the Republican Party as potential rivals for the 2024 presidential nomination. Obvious public contrasts exist, yet both men have kept their powder dry, but behind-the-scenes tensions have reportedly already erupted.

Trump has all but announced his candidacy while DeSantis remains noncommittal — publicly, at least.

As I suggested in a June Article titled, Trump Plays Nice About Potential 2024 Showdown With DeSantis, but How Long Will the Geniality Last?, “Let’s just hope those wheels don’t fall off before it’s over.” While we’re far from the race officially beginning, no wheels have fallen off, yet, but they’re already wobbling.

While there have been hints along the way, according to sources familiar with both camps, “stuff” just got real. And by “real,” I mean in Trump’s mind, his former “great friend” and “tough, brilliant cookie” is now an unappreciative, “ungrateful” self-serving politician, about whom Trump reportedly grouses: “I made him.”

Back to the Psalm. It’s 23 verses long. The final verse? Gentle, meek, and mild it is not.

But you, O God, will send the wicked
down to the pit of destruction.
Murderers and liars will die young,
but I am trusting you to save me.

As earlier noted, this could all be nothing intentional. That said, somehow, I doubt it. The media will doubtless hound DeSantis in Ian’s wake, looking for any shortcoming real or imaginary in his response to label him even more extreme and unclean than they already have. One suspects Noem would not be averse to a DeSantis/Noem ticket in 2024. If so, Psalm 55 definitely does not hurt her cause.

WATCH: Wild Video From the Surging Storm in Florida
Air Force ‘Hurricane Hunters’ Fly Through Ian, Pilot Describes ‘the Strongest Storm I’ve Ever Been In’