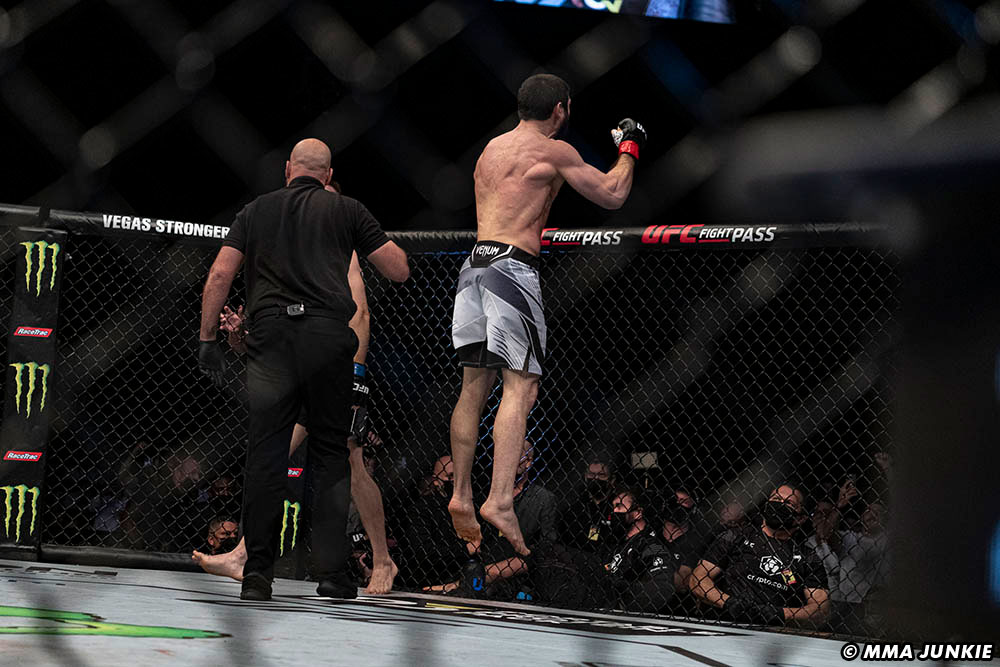 Islam Makhachev doesn’t see any option but a lightweight title fight after another dominant victory at UFC 267.

Makhachev (21-1 MMA, 10-1 UFC) extended his winning streak to nine fights on Saturday when he submitted Dan Hooker (21-11 MMA, 11-7 UFC) with a Kimura in the first round of their featured bout at Etihad Arena on Yas Island in Abu Dhabi. Many considered it to be the toughest matchup of his career, but Makhachev had little problem getting his hand raised.

With his teammate and coach Khabib Nurmagomedov now more than a year removed from giving up the belt for retirement, Makhachev said he has to be next to fight for the title against the winner of champ Charles Oliveira (31-8 MMA, 19-8 UFC) and Dustin Poirier (28-6 MMA, 20-5 UFC), who meet Dec. 11 in the UFC 269 main event.

“I feel good because I show my level – I don’t know how many minutes (it took),” Makhachev said at the UFC 267 post-fight news conference. “Now everybody going to talk like Hooker is an easy opponent, he don’t have grappling or wrestling. Hooker is tough. He beat a lot of wrestling, grappling guy took. He beat Gilbert Burns, many guys. I think I deserve now. When (Michael) Chandler beat Hooker they give him title fight. Why not (me)? I am ready, too. I’m here not to beat 15 people and fight. I have nine fights (in a row now).”

Makhachev said coming in that he knew he needed to do something impressive against Hooker. He did just that by becoming the first to submit the New Zealander since 2012, and now he’s demanding the UFC gives him the opportunity.

A key 155-pound bout between Chandler and Justin Gaethje next Saturday at UFC 268 is sure to play a key factor in how the division plays out. Makhachev thinks he should be in front of the line no matter what happens, though, and he expects Poirier to be the man standing across from him.

“I think Poirier is gonna beat Oliveira,” Makhachev said. “Many things going to change in next couple months. That’s why I’m going to wait.”