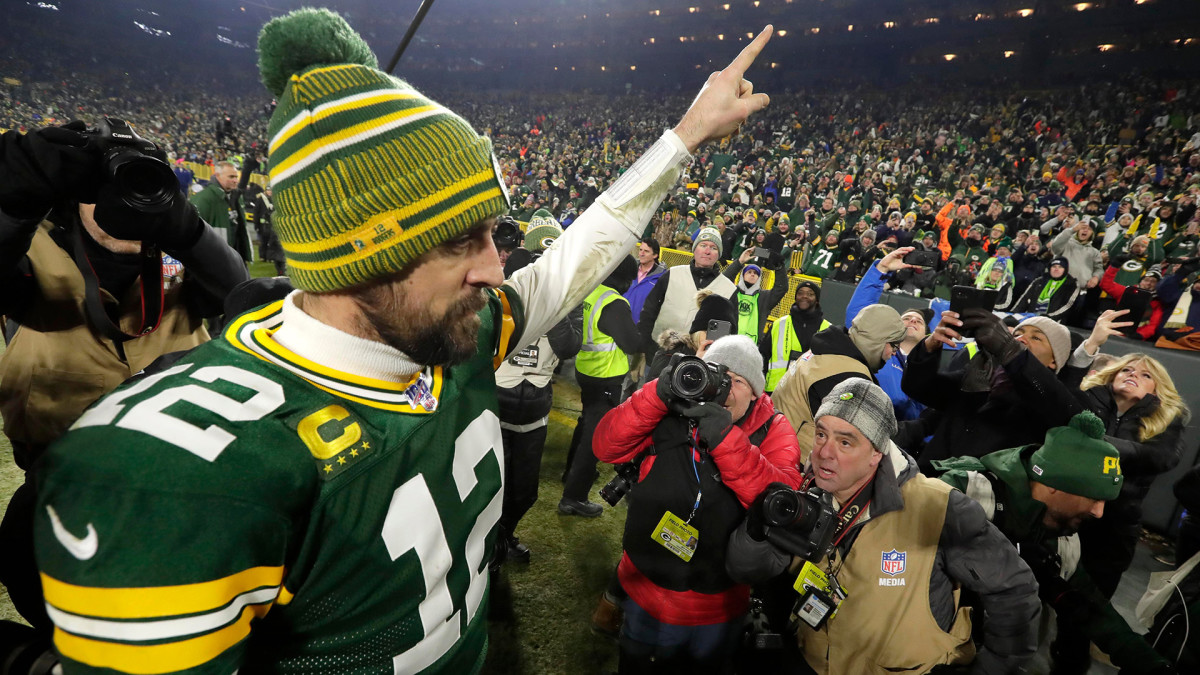 The quarterback and team are still dancing around the issues, as another leak hints this really is the end.

Because professional football contract negotiations must follow a complicated dance played through anonymous national media leaks—rather than having both sides publicly explain what it is they’d like from all of this, allow us to translate Tuesday’s updated news item (via Adam Schefter) that Aaron Rodgers turned down a “a two-year contract extension that would have tied him to Green Bay for five more seasons and made him the highest-paid QB and player in football”:

Of course, we don’t know what that extension looked like (while Rodgers turning down a contract extension was known, the news itself provided more detail on the length and supposed heft of the pact that was rejected but not its substance). It could have been the contractual equivalent of a cardboard-bottomed boat, which may be why Rodgers’s agent recommended he toss it out the window while driving down Washington boulevard in Culver City. An offer is one thing. An ironclad declaration that they would keep him here for half a decade more with no escape hatch is another. Maybe Rodgers prefers this kind of stranglehold.

Or, maybe Tuesday’s news means what we knew it could all along but never thought possible; that we should actually, possibly, quite seriously prepare for a season that does not include Rodgers at all. While the anonymous media dance is sometimes hard to follow, even for those wrapped up in the tango, a white flag being raised a week before the start of training camp says all it needs to say.

Time to throw organizational weight behind the Jordan Love hype train, organizational dirt on the player who isn’t showing up and pray fans still show up to shovel them out of the stadium on cold, snowy days. Tuesday’s move had its intended effect, with multiple popular web sites gleefully characterizing the tidbit in headlines as Rodgers turning down a contract that would make him the highest paid player in NFL history without knowing exactly what that might mean, or how the Packers intended on doing so. This posits him as greedy to the fan base, one of the more powerful—if deceptive—weapons a team has at its disposal during disputes of this nature. The longer this pattern holds, with breadcrumbs dating back to June when the team’s highest-ranking executive suggested that there was a portion of the fan base that would be fine moving on from Rodgers, the less likely it will be to see a private jet landing in Brown County.

What makes this different, you might ask, than any other public holdout that seems to reach its crescendo just before training camp, only to deescalate at the moment one side blinks and signs on the dotted line? Down in Dallas, for example, Jerry Jones has made these things an art form, a gleeful spectacle. He pretends not to know his players’ names. He rambles onto interview sets and insists the Cowboys will be just fine without ol’ so and so, knowing full well that he’ll open his checkbook a few weeks later on a quiet day when his pearly whites can dominate the news cycle. Jerry Reese, the former Giants general manager, liked to talk about the times he had breakfast with flustered holdout Osi Umenyiora at a diner down the street from the facility, joking about the turbulent headlines supposedly detailing their animus toward one another. It makes us all feel a little dumber having fallen for it again, as if we’re unaware of the time loop we’ve been stuck in, where the pattern remains the same and all that changes is the name of the player.

Throughout this particular dance, the only insistence from Rodgers’s side was that money was no object. And if it secretly is, Rodgers will have a hard time using the folksy, R-E-L-A-X bit to a fanbase that may be starting to see through him a little, especially now. Save for firing the general manager and team president, it seems as though nothing would make Rodgers happy unless he’s dealt. That return fire from his camp has remained as consistent and unwavering as anything.

So we’ve arrived here, where it seems like soon no one will feel much like dancing anymore. In a perfect world where we don’t have to do this, we’d have a fuller picture of the chasm’s size. Rodgers doesn’t want to play in Green Bay anymore because “it’s just kind of about a philosophy and maybe forgetting that it is about the people that make the thing go. It’s about character, it’s about culture, it’s about doing things the right way.”

The only thing we can know for sure is that floating out a news item that ultimately couches your star player as ungrateful and out of touch with the stumbling economy beneath him is not typically among the most amenable ways to solve this problem. It’s a defense mechanism. A shield. This is the part where the song ends and both sides will be left to find other partners, convincing themselves that they did all they could, when really all they did was dance around the problem.